You See It, You Know What It Is. 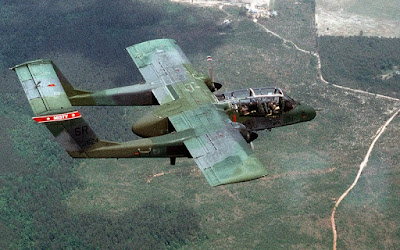 The first time I saw one overhead I knew instantly what it was. The twin boom, high tail, stubby winged aircraft could only be the OV-10 Bronco, a twin turboprop job that did yeoman's service in Viet Nam.

I wonder what the ISIS boys in Syria must have thought when they first spotted it overhead. My, my, my.

The US military is looking for a new close-support aircraft and decided to dust off a pair of OV-10s for a try out against Islamic State forces. Apparently they did just fine if not really, really well.

The twin-engine Broncos—each flown by a pair of naval aviators—completed 134 sorties, including 120 combat missions, over a span of 82 days beginning in May 2015 or shortly thereafter, according to U.S. Central Command, which oversees America’s wars in the Middle East and Afghanistan.

Central Command would not say exactly where the OV-10s were based or where they attacked, but did specify that the diminutive attack planes with their distinctive twin tail booms flew in support of Operation Inherent Resolve, the U.S.-led international campaign against ISIS in Iraq and Syria. The Pentagon has deployed warplanes to Turkey, Kuwait, Qatar, Jordan, and the United Arab Emirates, among other countries.

The US currently relies on F-15s and F-18s for most of its ground attack missions in the war against ISIS. An F-15 can swallow up $40,000 per hour just for fuel and maintenance costs. The Bronco comes in closer to $1,000.

The OV-10s proved incredibly reliable in their 82 days of combat, completing 99 percent of the missions planned for them, according to Davis. Today the two OV-10s are sitting idle at a military airfield in North Carolina while testers crunch the numbers from their trial deployment. The assessment will “determine if this is a valid concept that would be effective in the current battlespace,” Central Command spokesman Davis said.

After Viet Nam, the USAF and USN Broncos were snapped up by foreign air forces and civilian buyers. The Marines got rid of their last OV-10s in 1999. In other words, the military doesn't have hundreds of them sitting out at the warplane graveyard at Davis Monthan AFB. Boeing has a proposal to build a new, massively updated OV-10, if...
Posted by The Mound of Sound at 7:35 AM

With operating costs like these something have to give!
https://outrunchange.com/2015/04/13/operating-costs-per-hour-for-usaf-planes

Using F16's against men in Toyota's is not economical.


I've read similar numbers published in Aviation Week. Which brings us to the question of cost/benefit of using an uber-costly, highly vulnerable to groundfire F-35 to support ground troops.

I remember reading up quite a bit on the OV-10 several years ago. Splendid little aircraft; purpose built for the job, tough as nails and nimble as hell. You could even stuff half a dozen guys in the back with chutes and gear for a relatively quiet, behind the lines insertion if need be (go in at treetop level under cover of night, pitch up into a snappy vertical climb, and out they go). California still operates a few for some valuable fire spotting duties.

Funny how sometimes the simplest - and even seemingly antiquated solutions - can prove to be the best fit instead of high-end, razzle dazzle technology...

I can remember the first time I saw film footage (yes, it was film back then) of I think it was two soldiers parachuting out the back of the OV-10. It was no fluke that it was operated in combat by air force, navy and marines alike.

Then again we've been using rifles (instead of muskets) since before the Civil War and we're still shooting bullets - of course much faster, much further and far more accurately - so some technology simply evolves. I could see a modern OV-10 with new systems, new materials (armour) and a pair of PT-6s doing the job it did so well almost half a century ago.

Back when Canada was looking to buy the F18 there was some military buff promoting smaller planes, somewhat like your picture above. His argument was that for the cost of the F18 fleet Canada could have 5,000 more useful planes.

Our military procurers forget about the mosquito effect in that enough mosquitoes can harry a horse to uselessness. 5,000 of those OV-10s would probably be more appropriate for the defense of Canada than the mini fleet of F35s with its silly toys.


The Bronco is a purpose-built airplane, Toby. It does a couple of things brilliantly such as close support of troops on the ground and forward air control. Unfortunately those do nothing for the defence of Canada and maintenance of our national sovereignty. That requires something with range and speed and high-performance agility, all of which the Bronco lacks.

Well look at the A-10 Thunderbolt (a.k.a. Warthog). The USAF brass and ticket punchers hate them, but the grunts and tankers who benefit from the cover they provide will sell their grandmothers for them. i often think that when time, distance - and all too often, rank - separate those in control from the guys whose boots are in the mud that they forget the immediacy or seriousness of their plight and what really works. The A-1 Skyraider's another excellent example; a plane "long past its time" that became an invaluable asset to the guys who really needed the support. I'm not saying that high tech doesn't have its place, but it can most decidedly work against you, too...

Yes, high tech does have its place - for missions requiring high tech. Which is a good opening for a discussion of the F-35. In what circumstances would it actually need its stealth profile, clean - everything tucked inside? There's only one scenario - a strike attack inside the airspace of an enemy with sophisticated air defences - i.e. China or Russia.

Unless you're planning a sneak attack on China or Russia and are willing to take your lumps when their missiles fly to your kids' schoolyard, then the whole stealth thing is really kind of pointless, especially given the compromises it demands in reduced speed, range, agility and payload.

At one end you have incredibly versatile aircraft and at the other incredibly limited but extraordinarily expensive aircraft. This is a vexing problem when your defence budget is minuscule to start with.

The Americans have plenty of reasons for twisting the arms of allies to buy the F-35 but the defence needs of those allies are not among them.

I think that the "5,000 cheap, smaller airplanes" military buff Toby may have been referring to earlier was Bob Diemert, a guy based out of Carman, Manitoba who was something of an aviation eccentric. He was involved in the recovery and restoration of some Japanese warbirds - A6M2 Zeroes and a D3A Val, I believe - as well as a Hawker Hurricane, Fairey Firefly, and a P-51 Mustang, but he'd get into trouble with the airframe owners and Transport Canada for using off-the-shelf items from hardware stores in his restorations instead of approved, AN-certified hardware. His "5,000 plane" idea was some kind of small, single-seat, needlessly heavy and heavily armed airplane along the lines of the Junkers Ju-87 Stuka or Ilyushin Il-2 Shturmovik called the Defender with it dedocated to attacking Soviet tanks. How that makes an underpowered "tankbuster" a fighter plane I don't know.

He also envisioned a P-51 powered by a perpetual motion steam engine.

The NFB produced a documentary on Diemert some years ago that's available on YouTube. To get more of an idea into the guy, his kids asked for an in-ground swimming pool, so he gave them one...by digging up his house's living room floor...


Thanks for the clip link, Neil. Bizarre. The idea that you need slow flying attack warplanes to destroy slow moving Soviet tanks obviously overlooks advancement in anti-armour weaponry such as Hellfire. This fellow seems stuck at 1944.