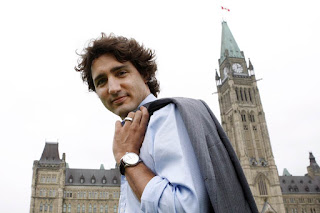 This goes for Justin Trudeau and his Liberal caucus and, like it or not, to the Liberal rank and file. Your party is effectively an agent of climate change denialism just like the crew before it was.

For all the sunny rhetoric surrounding the Paris agreement and a new Canadian climate plan, our federal government is still pretending dirty fossil fuels have a future in a world where we meet our climate goals. They push for LNG terminals and tar sands pipelines as if these projects won’t propel us to a climate disaster.

Scientists tell us we must abandon fossil fuels as fast as possible to have any hope for a safe climate. Building new fossil fuel infrastructure in a climate crisis is like digging the hole we’re in – even deeper.

Our leaders perform verbal acrobatics to justify the continued expansion of the tar sands and the creation of a brand new polluting LNG industry. They fall over themselves to promote pipelines while paying lip service to renewable energy. At least the last government was unapologetic about its vision for a fossil fuel future.

Harper never disguised his admiration for the Republican Party and he sought to recast the Conservative Party in its image. Trudeau hasn't said as much but he plainly wants the Liberal Party to emulate today's Democrats. The problem with that, as Noam Chomsky points out, is that today's Democratic mainstream is, at best, moderate conservative.

"There used to be a quip that the United States was a one-party state with a business party that had two factions: the Democrats and Republicans—and that used to be pretty accurate, but it’s not anymore. The U.S. is still a two-party state, but there’s only one faction, and it’s not Democrats, it’s moderate Republicans. Today’s Democrats have shifted to the right."

"[Political scientist] Norman Ornstein simply describes the Republican Party today as a 'radical insurgency that doesn’t care about fact, doesn’t care about argument, doesn’t want to participate in politics, and is simply off the spectrum.'"
Sound familiar? Liberals need to understand that their party's progressive era, the years of St. Laurent, Pearson and Pierre Trudeau, are over, finito. That courageous vision no longer resides within the Liberal Party. The ghost of Ignatieff lives on in Justin Trudeau. It's all neoliberalism now.
Posted by The Mound of Sound at 12:13 PM

I agree completely Mound. And once Trudeau has signed away our sovereignty, he is going to be needing the help of Bill C-51 to implement Neoliberalism in full. Once Canadians realize that their laws mean nothing and no longer protect their rights and freedoms, their going to riot. This will be Canadian tyranny done Trudeau style with platitudes and sunny ways. My guess is he just does what his advisors tell him and his economic advisors are advocating Neoliberalism and his political foreign policy advisors are pro US/NATO Imperialism.The Global Neoliberals must love him. While Harper was a fanatic Neoliberal, globally he was so unpleasant to deal with. Trudeau who is continuing Harpers Neoliberal agenda is so much nicer to deal with. Also he's nothing like his father. No talk of Canada having an independent foreign policy. Yes siree he's a real pleasure to deal with.

Not a Justin supporter. But it's actually not his fault. Under FPTP voting, the Liberal party has to split the Red Tory vote to stop the Cons and form the government. If they betray Red Tories, who are moderate neoliberals, Red Tories will support a Con majority in the next election. (Which could be as early as 2019.)

If people want real change they will support Trudeau's electoral reform initiative and whatever compromise it comes up with. Otherwise, all the complaining about Trudeau being a neoliberal will, ironically, only result in another Neo-Con decade. (And following that, another Neo-Liberal government followed by ...)

Justin Trudeau may actually be one of the good guys. He's in a position where he can see the establishment's stranglehold on government and he appears to be doing something about it. He needs the support of Canadians in the face of fierce opposition from the establishment and opposition parties who are trying to kill his electoral reform process.

I see your point, Anon, although I don't wholly agree. I am onside about the opposition trying to derail the process unless it's on their terms.

Still, Trudeau didn't write the rules for the last election nor for the post-election government. It sometimes appears that the NDP wants to proceed as though electoral reform - their favourite variety - was already in effect. It's not, no matter how loudly they whinge.

In the USA failure is the new leadership. Maybe young PET is playing the same hand.