Mr. Ambassador, You're Not a Cop 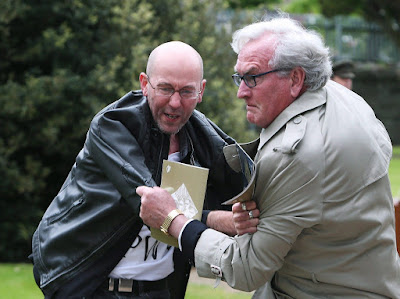 He rose to fame by taking down Michael Zehaf-Bebeau when the gunman stormed Parliament's centre block. That probably had something to do with former House of Commons Sergeant at Arms, Kevin Vickers, being appointed Canada's ambassador to Ireland. Nice gig.

Old habits, it seems, die hard. Ambassador Vickers was in attendance in Dublin today for a commemoration of British soldiers who fell putting down the October Rising when Irish Republicans tried to take Northern Ireland by force.

A protester wearing an "Easter Rising" t-shirt got up and yelled "this is a disgrace." Vickers intervened, tackling the man and apparently holding him until the cops could arrest him.

Kevin, great catch and everything, but... you're an ambassador, not event security. That's why they had cops there. You have to leave it up to that other nation's cops to decide if and when they'll arrest somebody. That's not your call.

The video is better than the photo:

The Prime Minister taking on the roles of Speaker and Sergeant at Arms may have started a trend.

Imagine the diplomatic incident if Vickers had been packing heat.

Lovely. I guess I'll have to wear an American flag sewn on my lapel when I visit Dublin the second week of June.

Canada's very own Ambassador vigilante.I'm actually surprised he did this. He must know, that man handling a protestor in another country is not part of a Canadian Ambassador's job and in fact is a no,no.

Once a cop, always a cop. And the RCMP has long been anti-democratic in its squelching of peaceful protest.

To me, the look on Vickers' face speaks volumes.

Wouldn't a true fan of democracy support the Irish republics. " If I had a face like yours I'd join the British Army " Liam Clancy.

What is our ambassador doing at a memorial for colonial soldiers who died killing off colonial serfs. Let alone picking sides.

@ Rumly, @ NPoV - I was struck when I looked at the photograph (top) but I didn't figure it out until I watched the video a couple of times through.

There's one more career that awaits Kevin and he can thank Barry Humphries for it. He'd make an excellent Dame Edna Everage. Humphries retired the legendary Dame around 2012 I think. Watch the video and see if you can't see the Dame Edna character there. Imagine Dame Edna, all decked out in her finery, hustling that protester out of the way just like Vickers.

Vickers' role in taking down Zehaf-Bebeau was overblown by the media and the Harper regime. Both wanted to promote a "lone hero" narrative, and they picked Vickers to get all of the glory. That much-repeated "hero" narrative seems to have gone to his head. He isn't fit to be a diplomat. He was only given the job as a favour.