Can We Trust Them? Don't Hold Your Breath. 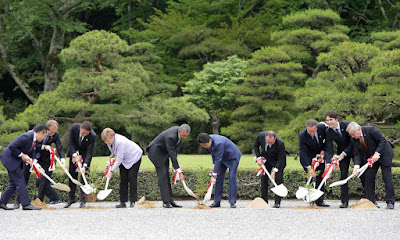 The G7 leaders have struck a pact to end fossil fuel subsidies by 2025. It sounds great, in principle, but do we have any reason to believe them?

In Canada our governments admit to annual subsidies of around 2.5 billion. Is that what will be ending? How much of that is provincial (a lot) and how will Ottawa get the western premiers to go along?

The real problem is that the amount our federal and provincial governments acknowledge is the tip of the iceberg. The International Monetary Fund (IMF) ran the numbers of all our direct and indirect subsidies - grants, deferrals, exemptions, the provision of natural capital (public property) either at no cost or below market values - and its total was just under $35 billion each and every year.

So what number are we going to be using? This is the sort of issue that Slick can get pretty weasley on. Until he acknowledges the IMF number there's absolutely no reason to believe that Ottawa will be making much of a dent in the subsidy scam.

There's no reason to think that he'll still be in charge by 2025 in any case and, besides, it's just a promise. We've heard a lot of promises from that fellow and we've learned that he doesn't always come through on his word.

As for America? Dream on.
Posted by The Mound of Sound at 6:37 AM

"Global growth is our urgent priority"


I know, Hugh. It's astonishing in a very tragic sense. Our new prime minister has proclaimed himself an instrument of expanding Canadian trade abroad. This he says is his prime objective. That explains a lot to his critics, me among them.

Just a bit of free thinking, inspired by your post.

$35 billion in subsidies? Those were the numbers when oil was over $80/barrel.
The numbers were freely available, but they were a pain to find. Don't know if they're still up.
The industry, back then, claimed a profit of $10 billion.
If the reduction is by %35, then currently the oil sands at $35 billion subsidies would only profit by $6 billion. Which, as seen, has created not insignificant job losses in Canada's tar sands, probably because the claim of $10 billion profits was dubious, considering the cost of doing the actual business probably wasn't even factored in. I wouldn't be surprised if the actual profit, back then, was only $3-4 billion a year.
If the Canadian government wants to restore profits back to $10 billion a year, it'd probably have to increase subsidies up to $50 billion. Spending $50 to earn $10 seems a major losers bet. Combined with the desperation to drive pipelines through BC, and we can only guess at how desperate the government must be to restore profitability.

Seems to be no vision with this Liberal government. I had faintly thought, perhaps, J. Trudeau might've invited some thinkers into his cabinet to plot a different course for Canada. But I also more realistically worried Trudeau's government would simply pick up where the Conservatives had left off: "We're different from them, because we'll do all the same things, but with fewer mistakes!" Thing is, the Conservatives were only capable of making mistakes, from sunup to sundown. Says much about them, but also much of the incompetence of the opposition.

Simply no vision in Canada's major parties. All of them have their leadership proclaiming basically the same damn tenets. And the Greens face an upward battle making inroads to influencing the major parties, dragging them back leftward.
Perhaps the grassroots of the NDP can take back their own party. That'd be a decent start. Or that the very least, burn it to the ground, and raze the foundation. Either or would be fortuitous for Canada, on the whole. The Leap Manifesto was a good start for them, there, but probably more such provocations are needed, in all of Canada's major political parties. Canada's left needs to make thing happen by shaking the foundations.

Like you, Troy, I think we need a new party. It doesn't have to be overtly socialist - calling for the destruction of capitalism,etc. - but it needs to embrace progressivism. Progressive principles can be restated. I often refer readers to Theodore Roosevelt's Square Deal speech of 1910 in which the core ideas are laid out. A quick review of them shows they would serve us well today.

I'm convinced that the main reason bitumen is exported in hazmat form, dilbit, is because there's no profit in it to justify the cost of building refineries to transform it into synthetic crude before loading it into pipelines. A lot of the market value of natural capital (public property) such as freshwater is also never recovered. The IMF quite rightly put a monetary value on all of those things to come up with its true value of government subsidies to the fossil energy giants.