Should the Summer Olympics Be Called Off? 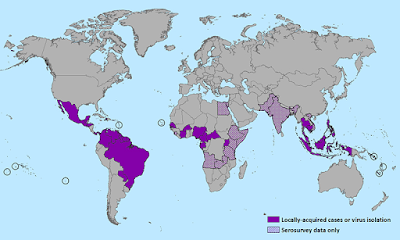 There's a perfect storm raging in Brazil. The country is in a catatonic state over the impeachment of president Dilma Rousseff. Social unrest is growing. The government, meanwhile, is doing virtually nothing to curb Brazil's particularly virulent strain of the Zika virus.

Amir Attaran, a biologist and lawyer at the University of Ottawa who recently argued for canceling the 2016 Rio Olympics, told Foreign Policy that the “on-again, off-again impeachment” has hampered the government’s already-flawed efforts to control Zika.

“Are we going to have a problem going into the coming few months with Zika and other infectious diseases in Brazil? Most definitely,” Attaran said in an interview hours before Rousseff was stripped of her presidential duties ahead of the impeachment process.“And that is most definitely caused by the political dysfunction reminiscent of a soap opera, and the long-term structural inequalities and failures of the Brazilian state.”

And now, the Olympics could help a dangerous strain of Zika go global. Attaran, who has served as an advisor to Brazil’s Ministry of Health, argued in the Harvard Public Health Review that Zika in Brazil is much more serious than previously acknowledged, and that allowing Rio to host the 2016 Olympics will speed up a global health crisis.

Rio has the highest number of probable Zika cases in the country, and the virus is more dangerous than previously thought — and not just for pregnant women, Attaran said.

If Attaran is right, Canada shouldn't be sending our athletes to Brazil and it shouldn't be allowing ordinary Canadians to go either.

Would we have hesitated to act if, instead of zika it was ebola, and, instead of Brazil it was Guinea hosting the Olympic games?

I know. Let's find another country with usable Olympic facilities that has a functional government and isn't beset with the zika virus. Give them an extra month or two to get the facilities ready as best they can and then just head there.

“Brazilian cities are terrible for humans but wonderful for disease,” Attaran said. “The reality is that you would not have a Zika outbreak if you had a properly governed country where there weren’t open pools of water where mosquitoes could breed. Where people did not live in ramshackle housing where mosquitoes could enter at will.”

Meanwhile, Rousseff’s efforts to control the virus through mosquito eradication appear to have been a failure, despite a military mobilization that Attaran calls “the single-biggest foray the country has had militarily, including during the military dictatorship.”
While it is impossible to compare the 2016 cases of Zika to 2015’s due to a lack of data, dengue fever rates suggest that the military eradication strategy was a failure. Dengue is spread by the same mosquito as Zika, so if the mosquitoes had been diminished, dengue rates would also have lowered. Instead, the first quarter of 2016 has seen a sixfold increase in dengue from last year.
Posted by The Mound of Sound at 5:15 PM

I think global warming is assisting the Zika virus by improving mosquito habitat.

It certainly can't be helping. Scientists have predicted an increase in mosquito-borne diseases.

My sister came back from a late winter trip to Mexico with a lovely case of Dengue fever. Caused by, yes, a mosquito bite. Very, very unpleasant.

Yeah, dengue can be a real bitch. How long was she ill? As I recall it usually goes about a week to a week and a half before the fever passes. They had a real problem with it in Rarotonga while I lived there. Mosquitoes were breeding in stagnant water captured in split coconut shells. You can never eradicate it.

Yeah, about a week and a bit. That mosquito will be moving north as warm too.

Wasn't there a near-perfect correlation between the release of genetically modified mosquitoes and the onset of the Zika virus? Or the introduction of the mandatory TDAP vaccine?

Anon, every conspiracy hatched on YouTube has a "near-perfect correlation" to something fantastic. And there aren't many diseases left to go to waste by the anti-vaxx crowd.

Yup! Definitely needs to be curtailed....the Olympics. How about those pesky black flies we have in Canada. What could they come down with as a treat?