Now What Do You Think the Chances Are? 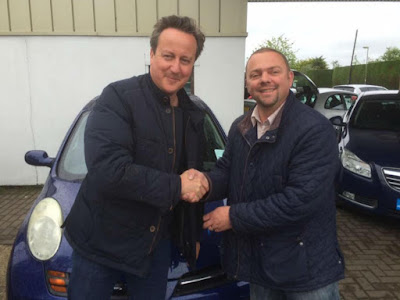 Was he trying to convey a message to the people that, if they vote to leave the EU, this is the future that awaits them?

There he was, Britain's own prime minister, David Cameron, in jeans and rough jacket buying a 3rd hand Nissan Micra for the little lady, Samantha Cameron, the mother of his children.

At 1,495 pounds, I'll bet Samantha has purses that cost more than the well used Nissan.

I guess Cameron was trying to go the humble, ordinary guy route to quell the controversy over his previous gift to Samantha, this, Rosie Lyburn:

Rosie is Mrs. Cameron's fashion (and social) advisor, and she costs the government some 53,000 quid a year.

The optics are ridiculous. There's an incredibly wealthy man, a child of privilege and advantage, buying a beater for his incredibly privileged and advantaged wife and apparently with little input from his "other half."

"Oh, don't worry about me dear. I'll make do with the Bentley and the driver."