While Slick is Up In Fort Mac... 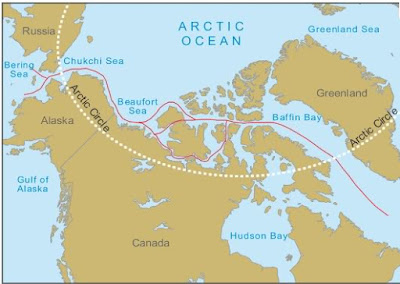 When our prime minister finishes his photo-op standing in the now cold ashes of Fort Mac maybe he should make his way to the air base at Cold Lake. From there he could commandeer one of those Hercules transports and wing his way up to the Beaufort Sea to witness the astonishingly early break up of the Beaufort sea ice. Wowser, it's months ahead of normal!!

Hmm, I wonder what that's all about? Maybe the villagers of Fort Yukon, Alaska could help Slick out on that one. Of course they're probably larking about. It's 75F up there now, 24 degrees above normal. They might be working out recipes for a delicious perma-defrost souffle.

Over the past 365 days, temperatures over the Arctic have been much higher than the rest of the world. Arctic sea ice is in a bad shape, ocean heat is very high... and rising, and high temperatures are forecast to hit the Arctic over the next week. Chances are that the sea ice will be largely gone by September 2016.

If it happens this year ... blue ocean across the arctic in September, then I'm in with the 7 meter-sea-level-rise-by-2070 Cassandra's. (Paul Beckwith)