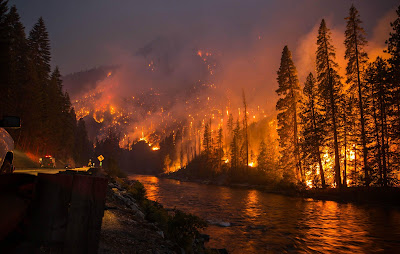 As the world heats up and dries out, ever more and ever bigger wildfires are becoming the new normal.

Many Canadians were shocked by the wildfire that engulfed Fort McMurray. Those are people who have been asleep at the switch.

The fact is massive wildfires are becoming somewhat commonplace around the world and science tells us they're going to getting more massive, more commonplace for decades to come.

Now I know that the "Fort Mac Mourners' Brigade" doesn't think it's appropriate to discuss that conflagration in the context of climate change, especially given the link between that city and the Athabasca Tar Sands, but to them I say "bollocks."

Would it help if we just added the Fort Mac fire and the rest of the wildfires that we'll be experiencing this summer to the bag full of mega wildfires from every other corner of the world? Would that help? Could we then have a grownup discussion of the problem.

It's not called "Alberta warming" or "Saskatchewan warming." No, it's called "global warming," emphasis on global. Just as those pesky scientists have been warning us, seemingly forever, our Earth is heating up and, with it, most wet parts are getting wetter while the dry bits are getting drier.. and hotter. Drier + hotter = more, bigger fires.

Justin's right. There have always been forest fires. But it's sort of like when he calls armoured fighting vehicles "jeeps." That boy sure has got a way with words.

There haven't always been forest fires of the scale and severity we've been seeing in recent years. That's the part Justin conveniently left out. Perhaps he thought it might mess up his pipeline narrative.

You see, what's happening on the Prairie, in Canada's boreal forest, and in Siberia, Brazil, Australia, Mongolia, Alaska, China, California and other places that have forests is something you can think of as an early-onset climate change impact. Early onset? Yeah, this is going to get a lot worse in the decades to come.

Look at it this way. In the States, the last three decades have seen forest fire losses, by acreage, double. For most of you that's happened in your own lifetime. And, in the next three decades, the US Forest Service expects that to double again. Wowser.

How much worse will depend on us and Justin. A lot of this is already "locked in." Nothing we can do about it now. But we can still make it worse, a lot worse, than it has to be. Here's one way. We can ramp up the extraction and export of the highest-carbon synthetic petroleum on the planet. Let's build some pipelines. Let's "git'er done," eh Justin? Sounds like a plan - if you're a pyromaniac.

Or, we could come to our senses and take a really hard look at what's already going on around the world and figure out what's on the way if we don't decarbonize our economy and our society in Canada and every other major emitter, overall and per capita alike. We've got a choice and not choosing is one of them.

Not now! Reminds me of the US where every mass shooting is not the time to discuss gun control. Has anyone been accused of "politicising" the ymm fire?

OT. Heads up, if you're interested. Ian Welsh will review Saul's Voltaire's Bastards.

PS Thanks for the Howlin' Wolf. Youtube moved on to Muddy Waters and I can't stop tapping my foot!

Thanks for the link, Chris. I've been trying to get through that tome for a long, long time now. Perhaps the review will inspire me to greater things.

The wingnuts are screaming shutupshutupshutup about climate change as if somehow talking about it hurts the victims of fire. I'm less worried about their influence now because it is waning as reality smacks us over the head.