Brousseau Clings Tenaciously to Her Moment of Fame 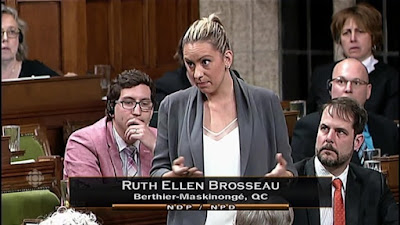 You gotta give it to Ruth Ellen Brousseau. The NDP MP knows how to wring every drop of attention she can get out of a non-event and she is sure going for it.

Brousseau, who claims she was elbowed in her chest by Justin Trudeau during a minor kerfuffle on the floor of the House of Commons this week seems to have contracted PTSD. She complains that she's still personally shaken by the incident. Maybe she could use an all expenses paid furlough to Vegas.

Now, to add insult to her non-injury, she contends the public is calling "bullshit" on her. Bad public, damn you all to hell.

Brosseau, who admits to still being personally shaken by the incident, says her office has received a number phone calls, many of them suggesting she is "crying wolf."

Brosseau also says the scrutiny she has received since Wednesday's encounter has been worse than in 2011, when as a rookie candidate she was ridiculed publicly for travelling to Las Vegas during the election campaign.

She said she's tried to focus on her work since becoming an MP and hopes that speaking out about the incident will make the story go away.

Yes, what would be more likely to "make the story go away" than continuing to whinge about it? From what I could see, Brosseau took the best dive anyone has seen since the World Cup.

It's good to see, here and there, as Montreal Simon suggests, that this clearly staged incident has backfired on the NDP and Angry Tom. People, like those calling Brosseau's office to her supposedly great distress, see right through it. That's why they're phoning her office, calling "bullshit" on her. As for Tommy, well he's just added yet another nail to his political coffin. Time to take out the trash.
Posted by The Mound of Sound at 4:37 PM

Well, this is Thomas Mulcair's NDP, where theatrics is valued over substance.
I'd like to hear more from more Dippers, but it's been quiet, really. I'd like to know who stands for what, but with how inactive they've been, I really can't trust any of them, whatsoever.
For the time being, I'm guessing this is what we'll get from the NDP. Theatrics.

Ruth Ellen Brousseau isn't the one keeping this story alive.

hear hear, some people are still living in reality. The NDP have been a valuable asset to Canadians, both in Ontario and nationaly they seem to only want a paycheck

Brosseau's moment of fame was when she was accidentally elected in 2011 while campaigning in Las Vegas. If she is learning the politcial game from Mulcair, she is toast. The old ways are failing. She needs to step away from Angry Tom or get trampled in the next election.

Here's my take on this, the lady has a right to a safe workplace and Trudeau violated that. Clearly, it was not intentional and the apology should have ended the matter. The media instantly blew it up and Liberals came out of the woodwork to shame the victim, as usual. It is not her fault.

Also, I would like to add that most women have been harassed, assaulted or made to feel vulnerable to male violence. Ms Brosseau, an attractive young woman, has undoubtedly encountered such behaviour. People do get PTSD from such attacks and this may have triggered such a response to a seemingly accidental encounter. That is my take on it.

Also, to Steve, it is none of your business whether her tits are real. Get a grip.

She wasn't harassed nor was she assaulted nor was she treated violently by Trudeau. He seems to have contacted her while his back was to her. That was inadvertent.

You contend, "People do get PTSD from such attacks." Yes, the emotional trauma of an attack can cause PTSD in emotionally frail individuals. That's why, in criminal law, the offence of assault doesn't require actual contact. Conveying the threat of assault for the purpose of making the victim fearful can be culpable. Except none of that happened to Brousseau. Only a curious mind could construe this non-event as an "assault."

I think that it is part of her job to mill about on the floor to delay a vote that will kneecap opposition MPs. Filibusters, delays and motions are all tools of democracy.

Trudeau did not assault her with intent, clearly. But what was he doing manhandling the Con Whip and swearing at Brousseau ("Get the Fuck out of my way")? How is that Prime Ministerial behaviour?

I'm not saying that this incident is the cause of PTSD. I'm saying, we don't know if she has had a previous incident that may have caused it to trigger and cause what seems to be an over reaction.

When it comes to women, everybody has an opinion and it is often ugly. I wish we could just move on and concentrate on KM, Enbridge, the climate and our future survival, but everyone is just fixated on REB and elbowgate.

Brousseau was targeted by the media from day one, and yet she works hard for her constituents and they voted for her a second time. She has a right to be there.

Kim you have a distorted notion of what her "job" is. It's not part of her job to obstruct another MP's passage on the floor. It's not part of her job to throw stink bombs or smoke grenades either. If, as you suggest her job is to physically obstruct others, then getting one upside the head would be fair play. Goose/Gander - get it? People get bumped in roller derby. And if that is the standard of conduct of today's NDP then they have earned their place in the basement of federal politics.

"When it comes to women, everybody has an opinion and it's often ugly" Really, do you believe that? I have ugly opinions about people but they're almost entirely about men, not women. Hmm, maybe I'm being unfair to men.

Yes, she is duly elected and "has a right to be there" and "there" is at her seat asking questions, debating and voting. She doesn't get to do any of those things - a.k.a. "her job" - pulling stunts on the floor of the House.

Kim, your arguments are taking you nowhere.

We can agree to disagree on this one Mound. We are in agreement on most issues.

Lets move on to important issues that could impact the future.

Brosseau should be very careful, Mound, lest she invite an unwanted observation, such as "Perhaps the House of Commons is too rough a place for women."

Hey, Lorne. I've got it all figured out in today's post. Where there's a will, there's...