How Do You Go From Emperor to Shopkeeper? Harper's AfterLife. 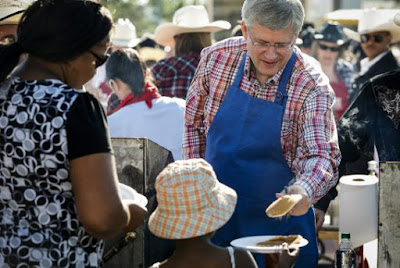 The rumour is everywhere. Shifty Steve Harper will resign his seat in Parliament this summer to pursue other opportunities.

One theory is that he'll set up some sort of foreign policy institute. Bad idea. While, on the international scene, Harper frequently liked to scold other leaders, he really didn't champion any notable initiative. He didn't build any grand alliances. He didn't bring peace to any troubled spot. He has no foreign policy legacy worth mentioning even if it could be recalled - and it can't.

The legendary foreign policy types tended to have vision. Harper, domestically or internationally, was never burdened by the weight of vision. No great statesmanship there - not at the United Nations (which he despised), nor at the
G7, NATO, APEC or just about anywhere else.

The alternative theory is that Harper is planning to enter business, pick up a few directorships, that sort of thing. Not sure he's cut out for that either. Personality problems. A person with dictatorial instincts might not be a good fit on a board of directors.

Brian Mulroney - there's a man who embodied directorial qualities. A jovial personality, a guy who could lean over and tell the next guy some dirty joke, a man who could seek out compromise or at least some accommodation.

Harper - he's convinced he is always, has always been, shall always be the brightest man in the room. He acts on belief, dispensing with evidence or fact. He has a low threshold for frustration, cussing out subordinates, kicking chairs across the room. He's a bully and, like all bullies, a coward - first one into the janitor's closet sort of guy. He's cold and lifeless, utterly joyless. He angers easily and cultivates grievance. Sum it all up, he really, really does not play well with others. He's a nasty, churlish little piggy.

What could he do? Maybe some third-rate burger joint franchise might work, the sort of place he could staff with guest workers from the Philippines, that sort of thing. He could hide out in the office/closet with the water heater; berate the staff all day and carry on his life as a professional shit.

I don't know. Any other ideas? Feel free to weigh in.
Posted by The Mound of Sound at 12:37 PM

He could found a scared rightwingnutjob closet dweller society. You don't want to know about the secret handshake.

He really is remarkably unsuited to just about anything, Mound.

I don't think we have seen the last of Harper. I think he is regrouping and will find another way to hurt us. Maybe he will get appointed to one of those kangaroo tribunals that allow foreign companies to sue under NAFTA and other trade deals. Whatever, the silver stake hasn't been driven into this zombie.

All I can say is 'Yay' and 'Good riddance'. Canada will pick up its pieces, but first we have to wash away the smear of Harper that stains all ranks of government office in Canada. Let the purge begin!!

Stephen Harper was an errand boy, sent by grocery clerks, to collect the bill.

.. Not sure how much time I want to waste on such a despicable ugly 'Canadian' .. Will get back to you.. as he and his ilk needed to watched very carefully..if we really didn't see him coming, we better to be very sure where he is behind our backs or out of sight.. And

A non-entity, who has been given a free ride by those with power who share his dogma.

I'm sure there's an old gas bar somewhere in Southern Alberta he and Laureen could operate.

Has a nice clang to it.

.. really need to put together a watch list .. Harper and the plague ship cabin boys. There won't be many, if any.. women.. maybe he'll tolerate Lellie Leitch.. & maybe not. For sure the bagmen and speechywriters need to be added even though they're not even pseudo intellectuals like Boessenkool.. or useful legal thugs like Arthur Hamilton. The thugs who know where the skeletons are, like Fantino will be fringe playas. Watch who floats to the top of the 'leadership' septic tank though.. and any allies or dire adverseries.. be some interesting conclusions to form then. But I think Harper is done with the 'conservative' husk remaining.. he's moving on as a dirty old rainmaker that's got poker chips buried everywhere. If he thought it useful to divide Canada, shred the Charter, go full reverse Mormon, align with Israel or China.. he'd do it. He has some sort of egotistic Rapture chip stuck up his arse and a yellow streak up to his neck as well. There's something drastically wrong with him.. and so many of his freako fanclub .. Boessenkool and Hamilton think he's some sort of political jesus .. so did Flanagan at one point. Tell me these are sane people? They are not.. tell me there is a powerful gay evangel core hiding out inside his cabal and you'll get no arguement from me. Their sexual proclivities are none of my business or interest - but spearchucking for christian canadian superior values & Israel gets my antenna twitching - roll in a heavy dose of Big Energy, Temporary Foreign Workers, subsidies and Arms Manufacturing for export and more than my antenna starts twitching.


It will be interesting to see how Cap'n Control Freak manages to integrate his warped personality into the private sector. Preston already has the neocon "institute" gig locked up. Maybe Harper will try to bump Manning out of the way and take over as he did successfully before. What else would give him anything so resembling a throne?

First rumored to be opening a conservative Think Tank. But... based on his past performance his options are somewhat limited., Harper may be inspired by Gordon Campbell returning to Canada back from London to open an 'over the top exclusive' Drunk Tank to strike out on a similar enterprise

Harper would do well opening a fall fair Dunk Tank. He would sell out for the duration. Maybe a joint venture on the CNE Midway center stage with Mike Duffy.

Heh. Well, aside from the fact he's walking away from his constituents who did technically elect him as MP... he's got NO private sector experience and his public sector political leadership was premised on a close group of insiders who sought to bend or break any rule, law, or convention that got in their way. He's liable to be a legal liability for any firm that hires him outside of organised crime.

Ladies and gentlemen. We Have a Winner, of sorts. Although not in so many words, Boris has described the ideal future career for our former prime minister. Yes, it does involve reading between the lines but the suitable field of endeavour is easily discerned.

Leadership of "a close group of insiders who sought to bend or break any rule, law, or convention that got in their way."

There it is. By instinct, inclination and experience, this fellow is an ideal candidate for placement as a mob boss. A sissified Kray brother sounds, to me, spot on.

Right wing think tank...now there is an oxymoron.