At First It Sounds Terrible 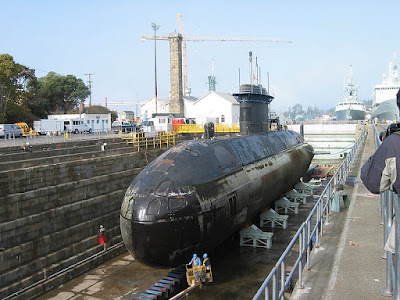 Here's the line: "Half of Canada's submarine fleet out of commission."

Here's how you put the water in that wine. Half means exactly two out of a paltry four which is minuscule to the point of irrelevance when you have the world's longest coastline to defend. And it's not like they were great boats even before they were taken out of commission. They're old, obsolete, unreliable trash. Chretien's Folly.

It seems the Royal Canadian Navy has been using a contractor that has botched a number of welds on the subs and on surface ships, frigates, as well.

The wonky welds are the latest troubled chapter in the story of Canada's four Upholder subs, acquired used from the British in 1998. The Liberal government of Jean Chretien touted the price tag of $750 million as a bargain.

The tiny fleet has been a maintenance and repair headache from the start. HMCS Victoria arrived in Halifax in 2000 with a dent the size of a pizza pie in its hull. HMCS Chicoutimi had a serious electrical fire during its 2004 voyage to Canada from Britain, which killed one crew member and required extensive repairs. HMCS Windsor had a hydraulic malfunction on its first training mission from Halifax.

The latest round of problems actually arose in 2014, when some bad welds were noticed on a surface ship, the frigate HMCS Ottawa. Further inspections showed the same welding issues with two more frigates, Vancouver and Winnipeg, as well as in the air pipes and hydraulic pipes in the two West Coast subs.

UBC defence analyst, Mike Byers, points out that these awful, horrible subs have been in service for an average of one month a year over the 20-years we've been saddled with them.

"These are unusually bad submarines. These are submarines that were rejected by the British Royal Navy, which tried to sell them to South Africa and Greece, both of which rejected them," Byers said.

With the Upholders nearing the end of their lifespans, Byers said the new Liberal government must decide whether to buy new diesel-electric subs from French, Spanish or German shipyards — or follow the example of Denmark, which has decided not to operate any submarines either at home or in Greenland.

These boats are Jean Chretien's brain fart. Wouldn't it be nice if we did Jean a favour and saw to it that nobody else had to die in them?

The photo above is HMCS Victoria in what has been her customary station - an Esquimalt drydock.
Posted by The Mound of Sound at 8:42 AM

What does Canada need submarines for? We need Search and Rescue helicopters, Coast Guard patrol boats, ice breakers and all purpose fighter jets capable of traveling Canada's long distances. We need assorted military bases around our perimeter, including the high arctic. What can submarines do for us? How would they serve Canada's defense?

BBC made comment about this early this morning.... The British wouldn't purchase them nor the Australians. Why don't we do what Denmark has done. From A

Sorry about that...don't know what I was thinking.....The British tried to sell them to the Australians and a number of other countries. They wouldn't buy them.

All you need to know.