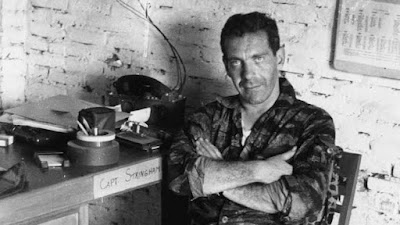 Canadian-born, Morley Safer, was a fixture on 60 Minutes for decades. He logged some 919 reports for the CBS network's flagship news magazine. The New York Times calls him a Sunday evening staple in American homes.

Safer was born and raised in Toronto. His career began as a reporter for various Ontario newspapers. He joined CBS in 1964 and opened the network's Viet Nam bureau the following year. His stint with 60 Minutes spanned a staggering 46-years.

...to an earlier generation of Americans, and to many colleagues and competitors, he was regarded as the best television journalist of the Vietnam era, an adventurer whose vivid reports exposed the nation to the hard realities of what the writer Michael J. Arlen, in the title of his 1969 book, called “The Living Room War.”

With David Halberstam of The New York Times, Stanley Karnow of The Washington Post and a few other print reporters, Mr. Safer shunned the censored, euphemistic Saigon press briefings they called the “five o’clock follies” and got out with the troops. Mr. Safer and his Vietnamese cameraman Ha Thuc Can gave Americans powerful close-ups of firefights and search-and-destroy missions filmed hours before airtime. The news team’s helicopter was shot down once, but they were unhurt and undeterred.

In August 1965, Mr. Safer covered an attack on the hamlet of Cam Ne in the Central Highlands, which intelligence had identified as a Vietcong sanctuary, though it had been abandoned by the enemy before the Americans moved in. Mr. Safer’s account depicted Marines, facing no resistance, firing rockets and machine guns into the hamlet; torching its thatched huts with flame throwers, grenades and cigarette lighters as old men and women begged them to stop; then destroying rice stores as the villagers were led away sobbing.

I just read the obit in the New York Times. He showed two -- perhaps three -- generations of journalists how it should be done.

Mr. Safer’s account depicted Marines, facing no resistance, firing rockets and machine guns into the hamlet; torching its thatched huts with flame throwers, grenades and cigarette lighters as old men and women begged them to stop; then destroying rice stores as the villagers were led away sobbing.

In subsequent wars, the Pentagon began targeting journalists not "embedded" with the troops, and the US press meekly fell in line preferring to report the "5 o'clock follies" without comment or fact-checking. It took Wikileaks to once again show the US military facing no resistance, firing rockets and machine guns - this time at a Reuters journalist in an urban area from circling attack helicopters. The brave pundits of the corporate press, of course, condemned Julian Assange for leaking the video.

I'm sorry to hear of this, Mound. All of the legends of journalism are gone now, it seems.

Not all the legends. There's still Wreck Smurfee, Canada's answer to Gollum.