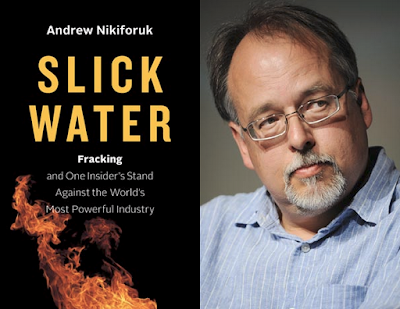 Andrew Nikiforuk is Canada's top journalist on the subject of oil politics. The author and veteran scribe for The Tyee has a piece on Justin Trudeau in Foreign Policy magazine.

Nikiforuk's take is that, for all Trudeau's environmental-conscious pretensions, he's still "hooked on dirty oil." He writes that the Fort McMurray firestorm forced Trudeau out into the open.

The unfolding horror show caught the young government of Prime Minister Justin Trudeau at an interesting juncture. Unlike his predecessor, Stephen Harper — an ideologue who championed pipelines, muzzled climate change scientists, and attacked environmentalists with malice — Trudeau has changed the tone. He ended the censorship of scientists and personally played a prominent role at the recent Paris COP21 conference on climate change. But he has not yet departed from Harper’s “drill, baby, drill” national narrative. He now promotes oil-export pipelines and wind farms in the same sentence — a sort of political schizophrenia. Contrary to overwhelming scientific evidence, Trudeau acts as though sunny rhetoric on curbing emissions will somehow win more markets for what has become an uneconomic crude. At current oil prices, most oil sand miners are bleeding cash.

Even Trudeau’s response to the climate-inspired disaster was somewhat oily, though sadly demonstrative of the business-as-usual attitude that afflicts even Ottawa’s best and brightest. On May 4, he abruptly criticized Green Party leader Elizabeth May for spelling out the obvious: that the fiery consumption of Fort McMurray and the global climate crisis are linked. “Any time we try to make a political argument on one particular disaster, I think it’s a bit of shortcut that can sometimes not have the desired outcome,” Trudeau countered. “There have always been fires.”

But that’s not true in a world destabilized by an increasingly human-engineered atmosphere. For more than a decade now, Canada’s federal foresters and climate change experts have documented a plethora of bad trends. Warming temperatures have not only increased the area burned by wildfire, but also extended the length of the fire season. Thanks to climate change, patterns of natural forest renewal by fire have been thrown off-kilter. The more frequent and more disastrous blazes have also bankrupted provincial fire-fighting budgets.

Canada is home to a third of the world’s great boreal forest. It supplies Canadians with $700 billion worth of life-supporting services each year and remains one of the world’s important climate and water regulators. Yet the hotter and drier it gets, the more easily it will succumb to fire, disease, and insects. As early as 2003, Canadian forestry experts made the inconvenient prediction that “it is unlikely that there will be sufficient resources to respond to increasing fire.” This, of course, all came to pass in the ashes of Fort McMurray.

...Bitumen, a tarry mess trapped in oil sands, has one of the highest carbon footprints of any hydrocarbon on the planet and is more impure than Mexican or Venezuelan sour crudes. As a consequence, the energy required to extract and upgrade 2.4 million barrels a day of oil sands has made the energy megaproject Canada’s single largest source of greenhouse gases.


Thanks to unchecked growth and the lack of a national carbon plan, forest-drying emissions from the nation’s oil and gas sector recently surpassed those of Canada’s immense transportation sector. Moreover, despite historically low oil prices, the industry now wants to double production, which would worsen emission trends. As a consequence, the oil sands and their climate-denying supporters have become an almost unmovable boulder on the road to constraining national carbon emissions. The project’s scale also explains why federal promises, made in 2006 to reduce Canadian emissions by 20 percent by 2020 and 65 percent by 2050, have all come to naught.

"There is no way Canada can come close to meeting its greenhouse gas targets by expanding bitumen production,” says David Schindler, one of Canada’s top scientists. Simply put, there’s no way Trudeau can make a dent in climate change without limiting — and then shrinking — Canada’s chief carbon-maker.

Canada’s fading oil sands boom is a cautionary tale on the madness of crowds and the greed of politicians. By rushing development to take advantage of high oil prices, the industry and complicit government regulators exaggerated benefits, ignored carbon risks, lowered taxes, and saved hardly a dime.

I'm sorry for all my former Liberal comrades who believed they were finally getting progressive leadership in the form of the son of Pierre Trudeau. I'm sorry but you were had. By now there's no doubt that Justin was flying a false flag. He resembles Stephen Harper a hell of a lot more than he resembles Pierre whether it's the Saudi death wagon deal, the Tory's BDS censure resolution, preservation of the surveillance state, climate change, the Tar Sands and even his feckless bungling of the assisted death legislation.

On the other hand I expect there are plenty of Conservatives who are pretty happy with how this new premiership is turning out.
Posted by The Mound of Sound at 5:25 PM

Yup. I think all we've gained is a grin (which looks more like a smirk on my worst days) and a photogenic family of yet more climate change doomed young humans.

.. Nikiforuk is a treasure. and Slick Water quite possibly the classic on fracking.. There's times I fear Mother Nature's blowback from fracking will be more fesrsome than her reaction to the Tar Sands. The latter being a vast open wound.. while fracking more like landmines & bomblets scatter wherever the shale oil exists. While media & politicians shout Ole! And pimp the incredible restorative powers of bitumen, the ancillary destruction, infrastructure, side effects and aftershocks of both extraction processes will be with us forever. Unfortunately the collateral victims of the assault upon Canada's environment will not be with us forever.

Justin Trudeau has the opportunity Stephen Harper completely missed. Both were elected on 'the promise' of delivering sound stewardship, accountability and blah blah woof woof.. I fear 'young' Justin will have to go renegade.. ie deny any backroom promises, refuse to sellout to Big Enterprise.. shock the world by recognizing that Canada is the 'last redoubt' of this planet. Of course Canadan registered mining companies will ensure the Amazon is decimated. Its the 'paramountcy' proclaimed by Harper Inc. And just look to China which has no bees, no clean soil or fresh water, to see where 'driving the economy' and pesticides can take you. Goodness, Harper must have thought Canada was some sort of western Mongolia to experiment on and he the Economic Master Khan!

Justin will need to be hammered by reality.. forced to recognize fact, science, biology, humanity, nature.. and it can be done. We just emerged from 10 dark years of National Idiocy.. we really can't stand further asininity from elected public servants. Mainstream Media will need to be shamed & villified.. (earth to Paul Godfrey!) Creeps & Scoundrels in Government (hello Nigel Wright!) need a spotlight.. and exemplars - teachers - our youth - biologists - artists need to be the sun & the stars to help Canadians navigate.

Just about everything you've posted on this subject supports the idea that:
standing in the way of climate change
(i.e. fighting fires in the Boreal forest that used to burn big, even before modern climate change, as part of its natural cycle)
is much like the US Corps of Engineers thinking they can permanently reroute the Mississippi River.

The real question is why we are trying to build modern industries and cities in these places.

CO2 latency (i.e. today's climate change is mostly a result of 1970's pollution) ensures that we will warm dramatically despite any mitigation we might come up with... short of stopping emissions today and implementing low-tech agri-based carbon capture on a massive scale. (Ya think?)

Will the 'great retreat' be a collective effort to save as many as possible or a capitalist nightmare?

@ Dana - agreed, albeit with sadness

@ Sal - I've always been nagged by a doubt that there's something not quite "there" with this young fellow. He strikes me as being less than meets the eye, a fellow who takes his orders from elsewhere. In the beginning he dazzled us by going after the low-hanging fruit - census, liberating scientists, native women inquiry - but he has consistently failed to provide anything remotely progressive on every big issue. That's when he begins to mirror Harper.

@ NPoV - "great retreat"? Perhaps. We're on a path that ensures we cannot live with nature so we either retreat or we push it out of our way as needs must.