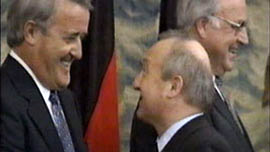 Don't worry, you don't stand much chance of being Mulroneyed in your lifetime.

No, being Mulroneyed is a privilege bestowed only on prominent individuals of some considerable wealth or prestige or both. This is the kid glove treatment, largesse that government affords to the few but virtually never, as in not ever, to the many.

Brian Mulroney (let's be charitable) "forgot" to declare the contents of those little envelopes of cash he received from Karl Heinz Schreiber on his income tax returns. So, when word of the over-the-coffee-shop-table payments got out, Mulroney hastened to file a "voluntary disclosure" to the Revenue Agency. He was then allowed to simply pay the overdue taxes with a modest amount of interest and be on his way - no penalties, no charges. Brian had been Mulroneyed.

Then, when the KPMG/Isle of Man tax avoidance/evasion scheme blew up in public, all of the accounting giant's clients were also Mulroneyed. They coughed up the back taxes with a bit of interest and were on their way, free as birds. No penalties, no charges. Even the guys at KPMG were off the hook but, then again, they're the guys who hire the big guys at the Revenue Agency when they hit pensionable time and leave government.

So keep that word, Mulroneyed, in mind because if the new government does indeed turn out to be little different than the last government you may again have need of it.
Posted by The Mound of Sound at 3:28 PM

The whole freaking country has been Mulroneyed over the past 32 years. Perpetual Red Tory neoliberal government and Tough Tory Times.

Someone needs to drive a stake in that MF! He's like an atomic cockroach. Nothing can get rid of him!

Sophie Gregoire wants to be "Mila Mulroneyed" and leech off the taxpayers to support her expensive lifestyle. Liberal, Tory, same old elitist story.

Anyong said....People like to say anyone with a big head and a big chin are "very intelligent people".