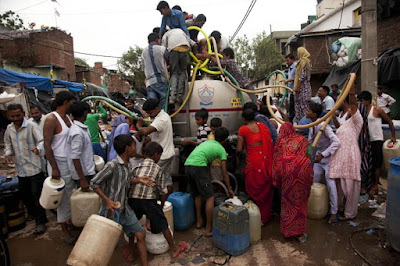 200,000 people in India die every year from lack of access to clean freshwater. India's groundwater resources are failing. Up to 70% of what freshwater India still has is contaminated.

By 2030 the situation is going to grow worse, far worse, according to a government think tank.

The Niti Aayog report, which draws on data from 24 of India's 29 states, says the crisis is "only going to get worse" in the years ahead.
It also warns that 21 cities are likely to run out of groundwater by 2020 despite increasing demand.

This would also threaten food security as 80% of water is used in agriculture.

Indian cities and towns regularly run out water in the summer because they lack the infrastructure to deliver piped water to every home.
Rural areas are also badly affected by a lack of access to clean water.

They cannot rely on groundwater due to erratic rains and the fact that the groundwater is increasingly used for farming when monsoon rains are delayed or insufficient.

As cities and towns grow, the pressure on urban water resources is expected to increase - the report estimates that demand will be twice as much as available supply by 2030.

...But what remains alarming is that the states that are ranked the lowest - such as Uttar Pradesh and Haryana in the north or Bihar and Jharkhand in the east - are also home to nearly half of India's population as well the bulk of its agricultural produce.

Smog more toxic than can be measured by monitoring devices has blanketed the Indian capital this week, months before the start of Delhi’s traditional “pollution season”.

A thick haze was visible across the city from Tuesday and some government pollution monitors have recorded concentrations of 999 – the highest they can measure – as dust storms kicked up in nearby Rajasthan state blanketed the region.

Though the billowing clouds of dust and sand were blamed for the immediate spike in pollution levels, the sight of dense smog engulfing Delhimonths before winter has underscored a growing awareness that harmful air is a year-round problem for the city.

India has been dystopian for a very long time. It is what happens when population growth overwhelms any and all attempts to solve communal problems.

They need a Doug Ford type to get in there and clean up the parks. It's part of his of his future "environment plan" that he revealed today. More details will be revealed when he talks to the businesses that are in the "environment industry". From his presser today

It's probably even worse in the Indian agriculture arena than reported above.

Here's an article by a Brit who lives there and specializes in writing about the agricultural sector:

Sorry, BM, but that article is not particularly convincing. The idea that this is a grand Western plot is conspiracy theory with a hefty radical spin.

India embraced the Green Revolution to excess. Farmers developed a dependence on groundwater (aquifer) irrigation and agri-chemicals (fertilizers, pesticides, herbicides) to grow bumper crops. India went from periodic famines to become a regional food exporter. Large areas of once marginal farmland were made highly productive but then the water began running out and the chemicals began depleting the soils of black carbon.

Water is a common and growing problem among every nation reliant on the Himalayan headwaters, particularly China, India and Pakistan, all nuclear powers. There was a reason China seized Tibet.

The article you reference has a foundation of fact atop which the author builds a castle of conspiracy. There are plenty of informative reports available through the UN FAO and other agencies you might find helpful.