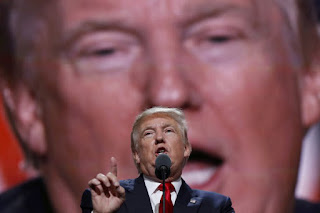 There is no proof that Donald Trump is working for Vlad Putin but Obama's national security advisor, Susan Rice, writes that Putin couldn't have wished for a better stooge.

Mr. Putin’s objectives are plain: to restore Russia to global greatness at the expense of the United States and to divide Europe by weakening NATO and the European Union. In Mr. Putin’s zero-sum calculus, when the United States and Europe founder, Russia benefits. The Russian leader knows that America’s global power rests not only on our military and economic might but also on our unrivaled network of alliances from Europe to Asia. For some seven decades, our alliances have ensured that America’s strength and influence are magnified. Accordingly, Mr. Putin seeks to drive wedges between the United States and its closest partners, to strain and ultimately rupture its alliances.

If Mr. Putin were calling the shots, he would ensure that America’s reliability is doubted, its commitments broken, its values debased and its image tarnished. He would advise the new president to take a series of steps to advance those aims:

First, withdraw from the Trans-Pacific Partnership, the trade agreement the United States negotiated to bolster its economic and strategic position in the Pacific, at the expense of China (and Russia). Then, pull out of the Paris climate agreement, becoming the only country in the world absent from this landmark accord.

Second, criticize NATO and cast doubt on America’s willingness to defend its allies on the grounds that they haven’t paid their bills (when that’s not how NATO works). Simultaneously, corrode the European Union by: lauding Brexit; sending Stephen Bannon to stoke European anti-establishment movements; and undermining Europe’s most powerful country, Germany, most recently through installing a right-wing flamethrower as ambassador.

Third, for the coup de grâce: start a trade war with our closest allies. Impose steel and aluminum tariffs on Canada, Mexico and the European Union with the threat of auto tariffs to follow so that, according to reputable economists, both the United States and its allies’ economies will suffer. Justify the penalties on the preposterous grounds that allies threaten United States national security. Do so after withdrawing from the Iran nuclear deal, following months of stringing our European partners along with the hope that we might agree to augment aspects of the pact. Then threaten sanctions on European companies for abiding by the deal, which has worked as intended.

...Finally, for completeness, Mr. Putin might encourage the president to ensure that countries large and small revile America’s leadership, suggesting he: disparage African nations and Haiti with a vulgarity; call Latin American migrants rapists and criminals; halt most refugee admissions; ban Muslims from several countries from entering the United States; restrict legal immigration; and separate children from their parents at the border.

With the sum of these actions, President Trump has deeply angered our closest allies and offended almost every member of the international community, except Israel, Saudi Arabia, the United Arab Emirates — and Russia. Meanwhile, Russia is ascendant in the Middle East. The European Union is reeling — with Italy, Slovenia, Austria and Hungary now led by populist nationalists who embrace Mr. Putin and wish to terminate sanctions against Russia for its invasion of Ukraine. NATO’s unity is similarly strained, provoking concern about its collective will to counter any new Russian aggression.

...America stands alone, weakened and distrusted. Without United States leadership, the G-7 can accomplish little. And, when next we need our allies to rally to fight terrorists, place sanctions against North Korea, combat a pandemic or check China and Russia, will they join with us after we have so disrespected them?

I don't know what's taking Mueller so long, the collusion's right out in the open.


My guess, Cap, is that there's so much for Mueller to process that it's going to take more time. How long did Watergate take before Nixon took that final helicopter ride from the White House lawn? I think it was close to three years.

Nixon wasn't profiting off his presidency or doing everything he could to wreck the US government and its international standing. Cox could afford to take his time, Mueller can't.

When action was required many countries closed ranks to drive Iraq out of Kuwait.

The world is capable of overcoming differences when standing up to an aggressor.

When will we accept that on many occasions the aggressor is the USA?

Or in other words, Donald J. Trump is putting an end to the failed "neoliberal" era of free-trade globalization that has brought Western civilization to the brink of collapse.

Let's impeach him! Presidents aren't supposed to do things! They're just supposed to flap their gums and tell us oligarchs control the world and you'll just have to suck it up.

One doesn't have to agree with everything Trump does. That's what democratic government is all about. One administration accomplishes some things, makes some mistakes. The pendulum swings and the next government builds on the positive accomplishments and corrects course where errors were made.

Trump is getting the ball rolling – BIG TIME – after 55 years of nothing. The first accomplished leader since the days of great leaders like Eisenhower, Lester Pearson and Tommy Douglas.

If you are opposed to everything Trump is doing, you are in support of everything that has gone on over the past decades: since Reagan, since Nixon, since JFK killed the New Deal on an economic-to-social-progressive pivot.

You are on the side of corrupt corporations, upper-crust moochers raping and pillaging the globe and their lapdog Liars in Public Places. They are the ones telling you to act hysterical. They are the ones spiking the prolefeed with crystal meth.

(The Red Pill is way tastier than the Blue Pill or the Black Pill. You don't have to be chained to the walls of the Cave. Just walk right on out into the open green fields, fresh air and that endless horizon. All free for the taking!)

Trailblazer asked, "When will we accept that on many occasions the aggressor is the USA?"

That is increasingly the elephant in the room. Canadians find it hard to judge the US probably because we all have American friends.

America WAS the aggressor. Before Trump!

GWB, BHO and HRC spread war, chaos and terrorism across the Middle East sending a flood of refugees into Europe. Less than 2 years in, Trump is mopping up the war against ISIS. Seems all he had to do was stop arming terrorists and slaughtering civilians.

Trump also appears to be ending the wars across the Americas. First came the "war on socialism" with the American-backed coup in Chile in 1973. That brought CIA death squads and torture-chamber laboratories. By the end of the 1980s, super-gangs had spread from US inner-city ghettos to across the Americas. Then came the wars on crime and drugs. (Law Enforcement gotta eat.) This produced the "era of mass incarceration" (fueled by private-prison-sweatshop profits – no less racist and rotten than slavery) and a of flood of refugees into the US.

Trump wants to bring $15/hr wages to Mexican autoworkers and (I would imagine) stop decades of Deep State corruption in the region – as well as the flood of refugees (being brutalized by savage gangs and drug cartels.)

He also says he plans on freeing People of Color who had their lives stolen from "three strikes" legislation – brought to America by the Clintons (who called Black youth "super predators" to build support for an inner-city po-lice crack-down.)

I would say the people who unconditionally HATE Donald J. Trump are looking more and more unreasonable. If they have any causes of worth, they are not doing them any favors.

Laughable - Trump is a posturing fraud, misogynist, serial liar and his associates in the GOP are getting their pockets lined just as Trump is.. along with how many golf outings.. Nothing he has said or whined about has a glimmer of truth.. but that's 'getting the ball rolling? Electoral gerrymandering, stripping black American of their vote.. The Trump & GOP are a squirming pus sack of faux Evangelistics. I think they all think they 'can take it with them' including the country clubs & memberships & Lear jets. Sure, Bannon was & is 'sweetheart' as is Hannity - not ! Red pill, blue pill.. ah balony.. One of the great horseshit salad comments I have ever seen.. no lettuce or tomato. That someone dragged from the rabbit hole but behind the looking glass.. Maybe I misssed that it may pure satire.. or does its 'author' think nobody can follow the threads of actual reality, ethics and values via multiple sources.. other than Fox TV (dazed & comfused & viciously partisan - cashing in on nonsense)

Trump is a mixed-bag, to be sure. But surely not as bad as all who came before him. With Trump there's at least something in the bag. With his predecessors post-Eisenhower, nothing but corruption and lies serving upper-crust interests.

(Well, I mean, if you were to dig through history you might be able to find some things they did that were on a level of competence. But that would be the equivalent of searching through a garbage dumpster for a meal. Not the way you want to have to do it. Not something you would call democracy.)

The problem is Big City Liberals are really cliquish. Real Mean Girls. Used to getting their way by baffling and bullying people with bullshit. That process may work with whatever kind of cult of crazy you have going.

But you can't bully people when they vote. Because when they get to their place of privacy and cast their vote, that's when they give you a big giant GFY! if all you're giving them is bullshit.

That's what's going to happen in the upcoming midterm elections. And it won't be bribe-taking lawyer-politicians who take the blame for the walloping. The Fake Media will scapegoat "Bernie Bros" to kill off their movement.

BTW, Doug Ford is a neocon globalist, who, unlike Trump, did not win a democratic election (let alone a trifecta.) He's a member of your "Resistance" against Trump. The neocon-neolib-neoprog axis of nihilism.

Of course, the neocons and neolibs understand they are on the same side serving the same master. Neoprogs are just sheep being led to the slaughter. (On the other side, they come out neoliberals! Welcome to your Carlsberg years! Welcome to the Machine.)

Anon, again your arguments are part fact/part fantasy. I won't engage you. There's no point.

Mound, it actually would be illuminating to see which arguments of Anon you consider to be facts and which fantasy.

For starters, is this a factual statement?
"GWB, BHO and HRC spread war, chaos and terrorism across the Middle East sending a flood of refugees into Europe. Less than 2 years in, Trump is mopping up the war against ISIS. Seems all he had to do was stop arming terrorists and slaughtering civilians."

When Trump demands that Russia be reinstated to the G7...you need not worry about Trump's involvement borrowing money from Russia.