The Funny Thing Is - It's Here and What Have We Done to Adapt to It? 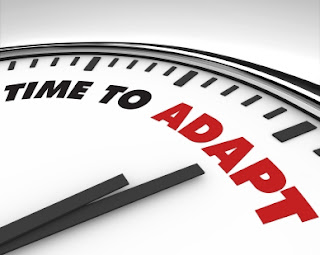 You might not have seen video of the dramatic flash flooding that swept the historic town centre of Elliott City, Maryland, but that doesn't matter. Perhaps you didn't see the devastation of New York City and the Jersey Shore by Hurricane Sandy. Maybe you've been in a coma for the last decade and more.

Most of us, at least most of the sentient population, have experienced powerful yet "early onset" impacts of climate change. "Global Weirding" is one example. Spring weather conditions in the midst of winter. Floods and droughts. Coastal erosion. The ever poleward migration of species - birds, mammals, fish, insects, even viruses. There are shared or common impacts and others that are regional or even local, sometimes the result of topography.

Our government tells us it has a plan. It's going to introduce carbon pricing that should encourage a reduction in greenhouse gas emissions of some order by some future date, perhaps 10, certainly not more than 20 years from the date of implementation, if ever. As Catherine McKenna so fecklessly reminds us, this is a "national unity" issue first and foremost.

There are two parts to this problem. One is mitigation - cutting GHG emissions in hope of forestalling the onset of climate change. The other, the one that gets so little love, is adaptation. That goes to our resilience to withstand steadily worsening climate change impacts that we're not going to be able to avert. That is "locked in" climate change, the steadily heating atmosphere that will unleash severe storm events of increasing frequency, severity and duration. It's the sort of thing that promotes a category 3 hurricane to a full blown category 5 monster.

There are ways to blunt nature's worsening weather wedgies but they're not cheap. Some sea level rise can be contained, for a while, by constructing stronger and higher sea walls in suitable areas. Major cities can construct major floodways along the lines of the Red River Floodway, "Duff's Ditch," that Manitoba premier Roblin built in the 60s to protect Winnipeg. We know that Calgary could sure use one or more of those, Toronto too. Then there's the restoration and replacement of essential infrastructure that was engineered and constructed to meet the gentler climate demands of a time now past.

Here's one thing we know. Fixing this problem will never be cheaper than it is right now. It might have been cheaper yet if we had only started ten years ago but that is spilt milk at this point. We know it will be vastly more costly, adding in economic loss and disruption, if we keep putting this off much longer. So what's the hold up?

What's going on in your region? Are they building the road networks of the future? Are they reinforcing your bridges and overpasses? Anyone upgrading your water mains and sewers? How about your already wobbly electrical grid? Getting a new one of those? Is your public health authority preparing for the new challenges of a new climate?

You'll recognize that your government has the problem in hand because they'll be spending tens of billions, many tens of billions of dollars on climate proofing your society.

Back in 2014, when Calgary was swamped from its most recent, once in a gazillion year floods, the World Council on Disaster Management held its annual conference in Toronto.

Now there's a handsome number, 57 trillion dollars to meet the world's essential infrastructure needs. Boy have we been robbing Peter to cut taxes for Paul!

Here's another number, one that our politicians have foremost in their minds. It's 27 trillion dollars. That's roughly the value of proven fossil fuel reserves already subscribed on global stock markets and bourses.  That number keeps our politicos tossing in their beds at night because they know if the carbon bubble bursts, most of that wealth simply evaporates causing no end of fiscal mayhem to banks, institutional investors, pension plans and, yes, government treasuries. No wonder these little shits love their pipelines so much.

Canada's approach? Oh, we'll throw 30, maybe 35 billion at the problem over 5 years. Maybe we can cook up some sweetheart deals to get the private sector to come up with another 50, maybe 60 billion that they can then fleece back from the public together with interest and hefty profits.

Here's the problem. 30 billion dollars, that's a political number that is not connected in any way to the enormity of the problem. It's just whatever they pulled out of their backsides. That much was clear when, in March of this year, a joint audit by the federal environment commissioner and the auditors general of nine provinces found that the premiers and your prime minister don't have a clue.

Neither the federal government nor the provinces have adequately assessed the risks a changing climate poses to the country and have no real idea what might be needed to adapt to it, concludes a scathing new audit released Tuesday.

...It says while many governments have high-level goals to cut emissions, few have detailed plans to actually reach those goals, such as timelines, funding or expected results from specific actions.

Assessments to adapt to the risks posed by climate change have been haphazard, inconsistent and lacking in detail, with no timeline for action and no funding, the report notes.

It also calls Canada’s emissions goals a hodgepodge of different targets, with no consistency in how emissions are measured or whether cuts will target overall greenhouse gas outputs or just those from specific economic sectors. Only two provinces and Ottawa have actually laid out their specific 2030 emissions targets, and none are on track to meet them, Gelfand said.

Dame Cathy disingenuously steered the audit into mitigation and well clear of adaptation. Then again, she would.


“The previous government did nothing for a decade, but we’re 100 per cent committed to our target,” McKenna said. “Hard things are hard, we have a plan and we’re already seeing measurable results.”

That sounds just like what Harper used to say about Chretien - all talk, no meaningful action.  The problem didn't begin with Harper, dearie.

There's something telling that Cathy didn't even address adaptation. What it tells me is that I and you, we, and our kids and grandkids are pretty much on our own as far as this government, like its predecessors, is concerned.

What that means is that we're getting "behind the power curve" on climate change adaptation which means it will become increasingly more costly and more difficult to deal with as their dereliction mounts, year by year. Unless something changes, we're in for a hard landing.

There a lot of established jurisdictions that are going to fall apart including whole countries. Canada may not survive intact.