Whatever he might once have been, Preston Manning has become the old man sitting on the front porch rocker yelling at the Future to "get the fuck off my lawn." 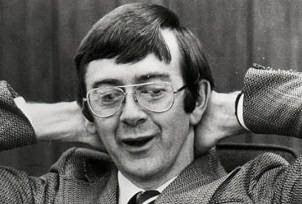 Some of you may be too young to recall with clarity the heady days when Preston's racist-laced Reform Party muscled the Progressive Conservatives from their Parliamentary perch in the post-Mulroney years. It was an Alberta-centric pack of rednecks who had no time for those darn Quebeckers, especially if they were named "Trudeau." Preston became leader of the Opposition, ditched his prairie shitkicker duds, the uber-nerd hairdo and got fitted for contacts. He even brought this peckerhead into federal politics as his right hand man. 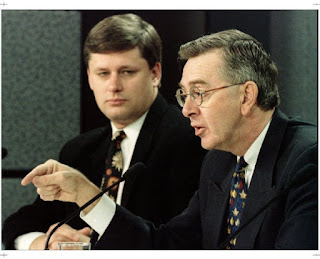 Yet for all his quirks, Manning was a capable parliamentarian and, at the time, I considered him the most dangerous MP from Western Canada.

Apparently Preston still finds mention of the "Trudeau" name a pain in the goiter. He seems particularly vexed at the federal government's decision to buy the Trans Mountain pipeline but if there's one thing even worse it's Trudeau's carbon pricing initiative.

Like a bitter old man, Preston attacks Trudeau's policies but without any cogent reasons other than "why it's Trudeau, dammit." Yet the really odd part is that Manning has been all over the board on climate change, petro-pollution and carbon pricing in the past. Let's be kind and just call him "flexible."

Back when Preston was running one of his Ontario candidates ( well call him Larry) went all racist over his black opponent. When asked by the CBC what was he going to do, part of prestons reply was "Larry has a tendency to call a spade a spade". Yep he was a red neck

As a lad, i thumbed, trained, bused, drove across the great land
I went east or west or north with never a thought
I found myself in PEI, Tofino, Muskoka or the Sault (The Soo)
or driving the combines in Manitoba & Saskatchewan
because I could ..
and Northern Alberta before it was tar sands..

I take no guff..
Been there done it, have the t-shirt & the tatoo
coast to coast.. if I was a rock or folk band... would seem normal

I have entered Banff National Park 70 or 150 or 250 times
Been to Long Beach 15 times or whenever I could
Hell, I served prime rib at Charlie Brown's a year easily
and ate Tofino's clam chowder.. daily.. OK twice daily

Played football with BC Lions & their rooks in the off season
quarterbacks like an eager receiver with golden hands
and I stayed in his home & enjoyed the cognac
and fireside chats with Nat Bailey (White Spots)
who could spin a good baseball tale..or 50

A top drawer American who became a Canadian entrpreneur

Everything he ever did has been a lie and a failure. No wonder he is a bitter old man.

Well he certainly oversaw the theft of
Alberta's oil wealth.

He also brought Karl Rove to Canada to teach Reform Politicians how to lie effectively. I very much disliked his faux “elder statesman” image he affected in later years. Such a fake.