Climate Change Resilience? Maybe I Was Too Hard on Government. 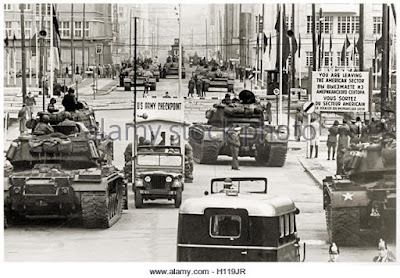 I was wrong. Our governments aren't ignoring all climate change impacts and the need for adaptation strategies. Infrastructure - power grids, roads, bridges, basic utilities, ports, that sort of thing - sure they're ignoring that. But there are climate change impacts they're getting ready for. Ask companies such as General Dynamics or Raytheon.

Militaries around the world have identified climate change as a major national security threat. It's not that they're just pushing on an open door, a way to remain relevant, needed - although that's part of it. It's just that mass carnage on a scale never experienced by mankind is coming.

Some experts contend that, if we're lucky, there could still be upwards of a billion of us on Earth by 2100. Well, we're expected to hit nine billion by 2030-2035, so that's a lot of billions who are going to be gone, most of them prematurely, in the following half century.

The environmentalists fell in with the militarists as handy backup in their battles against the climate change denialist crowd and the fossil fuelers. Now they're having second thoughts, worrying that climate change has taken on too much of a national security focus.

The Pentagon in 2003 was the first to talk about climate security, framing climate change as a “threat multiplier” that would exacerbate conflict, terrorism, mass migration and social instability. In 2008, the EU concurred saying that global temperature increases of more than 2 degrees (current predictions suggest we are heading for more than 3 degrees) would “lead to unprecedented security scenarios”.

Security is a modern day weasel word – who can be against security? The question rarely asked is whose security are we talking about - security of what, for whom and from whom? The US, EU and now Australian strategies, though, clearly state they are talking about the security of their respective nations in the face of “threats” usually coming from the consequences of climate change in neighbouring countries.

...The image they paint is a dystopian one, which assumes that climate change disruptions will lead to a dog-eat-dog world, causing conflicts and wars, and prompting millions to migrate – and this will require the military to deal with the ensuing chaos.

...But by blurring the distinction between the military’s ideas of security and other “human security” approaches, it embraces and reinforces a military response to climate change.

This is all true, no question. But it shines a harsh light on the flawed thinking of most of the environmental crowd. Very, very few among them see climate change as one component of a much greater, vastly more powerful problem that is not being addressed. You have to take all of the existential threats we're facing (do you think it matters if the bullet enters your brain from behind or the side or even the top?) and look for the common threads that run through them and bind them so that you simply cannot solve even one of them unless you solve them all.

These threats run the gamut from climate change to overpopulation, over-consumption, ocean acidification, the freshwater crisis, our broken hydrologic cycle and more. These are global threats although they're not experienced in the same way, to the same extent, at the same pace everywhere. They're not uniform. They can vary from one region to another. Some places shall burn to the ground first, others shall burn to the ground later.

They're still global problems but because they arrive at different times in differing degrees we don't favour global responses, the only approach that will ever work. Why not? Ask Justin Trudeau why he has a bitumen pipeline fetish in 2018 while some parts of the world are catching on fire? We don't do it because we're just too selfish and too greedy - too greedy, perhaps, even to survive. Read Jared Diamond's "Collapse: How Societies Choose to Succeed or Fail." There's a whole chapter on how humans have made utterly nihilistic decisions for short term gain. We just keep doing it. We just keep blowing up. Only, this time, it's on a global basis.

For years I posted regular "Arms Race Updates." I stopped when the rearmament developments became a blur. If the small nations of Asia Pacific have deployed or on order 200 modern submarines, does it matter if Vietnam is buying six modern Russian U-boats to defend itself against Chinese aggression? Yet a lot of this rearmament frenzy comes down to nations suspicious of their neighbours and their immediate region. Folks are starting to get antsy. Around the world, people are going for their guns.  Even peaceful Sweden has the jitters. They're building thousands of new bomb shelters because the 65,000 Cold War shelters can't handle the extra three million Swedes they've added since the 80s. Last week the Swedes issued a "be prepared for war" pamphlet to the entire population.

I do understand the environmentalists' desire not to see their issue hijacked by the generals but that horse has already left the barn. There's no global mechanism in place to solve these tightly woven threats because there's no global will to resolve them. It would mean equity, sharing, fairness on an unbelievable scale and those, the haves, who would have to share with the have-nots won't hear of it.
Posted by The Mound of Sound at 10:01 AM

Curiously, when confronted by a climate change denier he/she inevitably gets interested when I mention that the US military takes it seriously. (I don't know what the Canadian military position is. It seems to be preoccupied with trying to make an impression on one or another Third World people.)

Frankly, I'm glad the war departments are paying attention. It's about time somebody in governments do. It might help if some of those generals would grab their political leaders by the lapels and rather forcefully bring the dolts to understand that global warming is a real and present danger!