Taking Democracy for Granted. Are We On This Road Too? 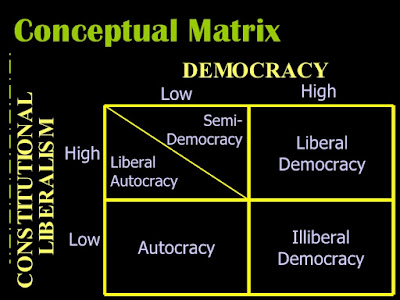 Andrew Sullivan has a thought-provoking essay in New York Magazine about how we're killing off liberal democracy and not just in Poland or Hungary or the United States either.

This elite condescension toward challenges to their power stems, philosopher John Gray recently argued, from a fundamental and demonstrably false assumption that liberal democracy and a transnational world order are the ultimate end points of history. The narrative was set in 1989 and, for elites, it cannot be relinquished now. What we’re witnessing, with Trump, Putin, and Xi, is just a detour, liberal democrats tell themselves, before normal service resumes.

But “what if we were wrong?” as Obama asked in the wake of Trump’s victory, according to Ben Rhodes’s new memoir of the White House years. “Maybe we pushed too far.” You think? A ruinous war, a devastating recession, trade policies that wiped out so many communities, soaring debt, and wage stagnation: Not a great record for the liberal democratic elites, is it?

And this record is why the most probable future is not about liberal democracy and internationalism, but about populist nationalism, with a distinctly “strongman” flavor.

...the strongman model is proliferating: Putin in Russia has dropped all pretense of democracy; Xi is now the first president of China for life; Erdogan in Turkey is still not done enlarging his powers; Netanyahu will be Israel’s longest-serving prime minister, governing on the basis of ethno-nationalism, suspicious of his own deep state, including the Mossad, and cementing a Jewish state from the river to the sea.

And in the U.S., of course, the omens are not good right now. Trump himself is resurgent in the polls — his disapproval-approval gap was -20 points last December; it’s -11 points almost six months later. On the generic ballot, the Democrats’ lead has sunk from 13 points to 6 in the last five months. The party is in shambles in Southern California, one of its key regions for regaining control of the House. Sean Trende now believes that continued GOP control of Congress is perfectly possible, even probable. Since, it seems to me, the midterms are our only real shot at checking our own strongman, this is demoralizing.

...Trump knows that most Americans are not going to read the fact-checks. And his pitch is so relentless, his ballsmanship so huge, that, in the end, the path of least resistance seems the most practical response. Even now, his repeated, unfounded calumnies against the Mueller inquiry, the Justice Department, and the FBI are working. Belief that Mueller is partisan is growing; confidence in the investigation has sunk; Trump has almost succeeded in making Russia’s intervention in the 2016 elections seem as if it were designed to support Hillary. A majority still hasn’t bought this. But, with a GOP “kinda taking a nap somewhere,” when it isn’t echoing every single lie and delusion of the Supreme Leader, the relentless propaganda is having an effect. Unless Mueller has evidence so astounding that even Sean Hannity draws a breath, the special-counsel probe could also be a political winner for Trump. If he’s impeached, barring an economic collapse, he won’t be convicted in a million years, and his reelection, once unthinkable, now has to be seen as likely.

In the end, most people just give in to the lie completely. It’s easier than constantly resisting a malignant, relentless narcissist. Or you tune out. It’s perfectly understandable. Covering this degeneration for the last year and a half has stressed me beyond any expectation. I may be missing a looming, massive tide for the Democrats this fall, and I hope I am. But it is perfectly possible that we will soon be entering the next phase of Trump: when the lie becomes the truth entirely.

It certainly seems like we are on the road to killing democracy but when I look back there were similar signs. During the Vietnam war years democracy looked pretty gloomy. There is always an entrenched establishment that wants all the good stuff to the detriment of everyone else and will do whatever it can to keep the riffraff subdued.

In some respects we are doing very well. We have, rightfully, seen a spreading of rights across a variety of peoples who have always been kept out of sight as much as possible. If we look at old pictures of politicians or corporate board rooms, as an example, they were almost exclusively white men, mostly old.

What we collectively have not learned is to manage public resources for all. We keep allowing the rich and powerful to control and profit from that which we should share.

Toby,
the struggle (in America) against the Vietnam war was an joyous exercise in democracy .... compared to the current behavior of the sheeple everywhere today.

Mound,
re: "But it is perfectly possible that we will soon be entering the next phase of Trump: when the lie becomes the truth entirely."

If the deux a machina (impeachment, rule of law etc.) is supposed to rescue us from Trump then the divine stage hands are blowing their timing.