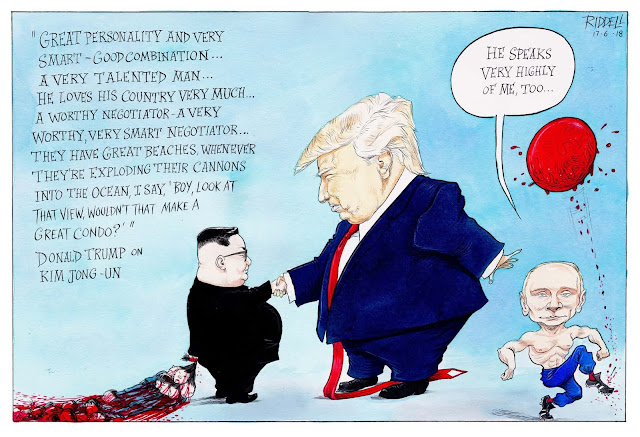 It's a testament to how utterly fucked up American evangelicals have become that they now worship* the least Christian president in their nation's history. Team Trump will even defile the Bible to justify taking little Mexican kids from their parents and tossing them into cages.

Nesrine Malik has seen this all before just like anyone who grew up in the Arab world.


To those of us who grew up in the Arab world, where Islam is often invoked by “secular” regimes in order to stem political opposition, and who are accustomed to this charade of piety, there is something chilling yet comforting in observing the authoritarian evolution of the Trump administration. There is a reason why some of those regimes will not do away with blasphemy laws, so handy are they in purging political opponents. It is chilling to see religion used this way in a supposedly sophisticated, liberal democracy, and in particular this element of it, which reduces politics to mere compliance. But it is comforting, in a macabre way, to have it proved that nowhere in the world have humans evolved beyond instrumentalising religion to justify tyranny. The most bewildering thing about US dictator creep isn’t that it’s happening: it’s that it is happening with such predictability.

The terror of the Trump doctrine is not in its innovation but in its imitation. The last few months are a testament to the fact that history is not past, that the passage of time does not necessarily imply progress. The words Sessions quoted were used in the 1840s and 50s to justify slavery. When abolitionists argued that slavery was cruel, and that separating families was a violation of religious ethics, they were met with the argument of religious compliance with the law. John Fea, a history professor at Messiah College in Pennsylvania, told the Washington Post: “Whenever Romans 13 was used in the 18th and 19th century – and Sessions seems to be doing the same thing, so in this sense there is some continuity – it’s a way of manipulating the scriptures to justify your own political agenda.”

The invocation of piety is also familiarly threadbare when the behaviour of this holy sovereign, allegedly with God’s will vested in him, is taken into account. Trump is a man mired in allegations of infidelity committed across the course of his three marriages. His church attendance was summed up in his statement that he had “never asked God for forgiveness”, and he referred to communion as “my little wine” and “my little cracker”. Yet he received 80% of the white evangelical vote. Of his unlikely Christian support base, Amy Sullivan, in the New York Times, says: “Decades of fearmongering about Democrats and religious liberals have worked. 80% of white evangelicals would vote against Jesus Christ himself if he ran as a Democrat.”

This is the most sinister and most powerful element of the dictator’s playbook: the pact with the base. Every policy, every utterance, becomes about what it signifies to its target audience rather than what it objectively means.

Where others see panicked children and parents mad with distress when ripped away from their offspring, Trump supporters decipher the scene in terms of what Trump is projecting: your fears are real, your will is done, and I am its executor. Once this line of communication has been established, there is little that can disrupt it, no appeal to emotion or logic that is fruitful. It is a feedback loop that is not about values or religion or even conservatism. It is about prejudice against the other and anger at liberals, the perceived enablers of the other.

To those Americans shocked that ancient biblical texts preaching obedience to the law are being uttered by senior White House officials, those of us who have gone through the anguish of holy texts being used to justify crimes against humanity can extend much empathy but no comfort – and the certainty that there is more to come.


*When I wrote that American evangelicals now "worship" the least Christian president in their nation's history, I used the word deliberately. No matter how odious Trump is, no matter how immoral, no matter how persistently devilish the man-boy is in feeding them a steady diet of lies after lies, they have reverence for Donald Trump. They venerate him. They extend to him their faith-based stupidity, suspending disbelief, even abandoning the powerful teachings of their Christ for this anti-Christ. They are, as I noted at the start of this post, wilfully "fucked up."
Posted by The Mound of Sound at 9:01 AM

.. the holier than thou faux evangelism disgusts me
Its just camouflage for who they really are..
It seems to be a sickness, not a calling from the lord

Sessions is a pipsqueak loser..
as are essentially all of them
Start with Trump and roll downhill
including Mrs Trump

its all complete baloney for votes
and pimp to 'the base'

In Canada I describe it as 'posturing'
that's what Scheer, Kenney et al are selling
snuffling for votes
and spewing pithy & pissy info at all of us

Thanks Andrew Scheer..
we see your daily spew
straight from the caucus and war room..
So much like Trump's daily toxic proclamations..

The Abrahamic faiths could well destroy the world as we know it.


Sal, I wish we had the other Trudeau at the helm right now. I'm not sure the current nameholder won't cry "Uncle Sam" if Trump ratchets up the pressure.


TrailBlazer. That damned book and every fundamentalist who embraces it will be the death of us. It says so right in the book.

For me the scariest part is realizing every batshit crazy idea we heard on the campaign trail in 2016 is being enforced. And he kept on wondering why they couldn't use their nuclear arsenal.

Oh look, and now he wants a "Space Force" that even his DOD is against.

“My new national strategy for space recognizes that space is a warfighting domain, just like the land, air and sea,” Trump said during a Tuesday speech at Marine Corps Air Station Miramar.


I can't imagine what Mattis must be thinking in the new White House of Bolton, Pompeo, Navarro,and Gina Haspel, all of them feeding Trump's basest instincts.

Mattis has likely got other things on his mind right now. As a director of Theranos, whose ex-president has just been indicted for fraud, Mattis may be worried about some liability heading his way.

Truly the swamp is being drained and its creatures becoming visible.

Yeah--they are indeed fucked up. But so are supposed liberal who continue to venerate two of the most craven, feckless and monstrous politicians of the 21st century. American liberals have decided slaughtering innocent civilians by the hundreds of thousands is a-okay, just so long as its Hillary or Obama doing it and not Trump. They also didn't have a problem with separating families and caging children back when Obama was doing it.

Learn a little something from sources other than Fox you dumb cocksucker.


Deacon, please relax. Bill is American. They're not burdened by fact.

There is no such thing as a God with a long white bread and a walking stick. Religion is the root of everything that is wrong with this world.