If We're Insistent on Extinction What Gives Us the Right to Impose that Fate on Other Creatures? 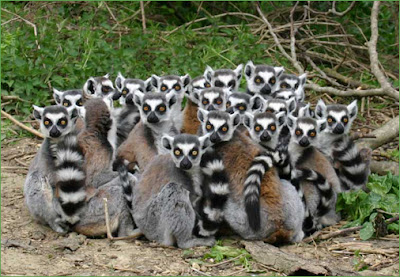 While we proceed apace at rendering Earth uninhabitable for humans, conservation scientists think maybe we should let other species have a shot at surviving. There are several ideas but one that's been bandied about recently is divvying up the planet so that there's a human territory and another half that we leave to all the other billions of lifeforms. Hey, we're still taking our half. That would be ours to destroy however we damn well choose.


Let’s be honest, the global community’s response to the rising evidence of mass extinction and ecological degradation has been largely to throw crumbs at it. Where we have acted it’s been in a mostly haphazard and modest way — a protected area here, a conservation program there, a few new laws, and a pinch of funding. The problem is such actions — while laudable and important — in no way match the scope and size of the problem where all markers indicate that life on Earth continues to slide into the dustbin.

But a few scientists are beginning to call for more ambition — much more — and they want to see it enshrined in a new global agreement similar to the Paris Climate Accord. They also say that the bill shouldn’t just fall on nations, but the private sector too.

...Last year, 49 scientists wrote a landmark paper exploring how feasible Half Earth might be across Earth’s different terrestrial ecosystems. But the head-line news of this paper was really this sentence: “We propose a Global Deal for Nature — a companion to the Paris Climate Deal — to promote increased habitat protection and restoration, national — and ecoregion — scale conservation strategies, and the empowerment of indigenous peoples to protect their sovereign lands.”

...“A number of empirical studies are telling us that we need to set aside about half of the terrestrial and marine realms to avoid the worst of the two great environmental catastrophes — climate change and the sixth extinction crisis — looming on the horizon,“ Eric Dinerstein, the lead author on the paper, said. Previously with WWF, Dinerstein is today the Director WildTech and the Biodiversity and Wildlife Solutions Program with the NGO, RESOLVE.

The biggest problem is, you guessed it, our political leadership the very people who, in their relentless (and utterly futile) pursuit of perpetual, exponential growth (GDP) have steered us into today's mess.

Regular readers will probably be expecting me to rail on about Justin Trudeau at this point and, honestly, I don't intend to disappoint. There's a reason why the total numbers of terrestrial and marine creatures - mammals, reptiles and birds; fish, marine mammals and seabirds - has declined by far more than 50% since the advent of neoliberalism and its companion scourge, globalization.

It's been us versus everything else for 40 years and, in that time, our numbers have more than doubled even as our longevity has increased and our per capita consumption has soared.  We crept past the Earth's ecological carrying capacity in the early 70s. And so, to keep feeding our rapacious demand for more and more of everything, we've resorted to sleight of hand. We have stolen what we could take from other creatures and we have stolen from future generations, our own descendants. We are the contagion. We are Earth's plague. And we're heading for the exits.

You could say that Trump is a manifestation of our problem. His America is the most affluent major country on Earth. Yet he wants more, a lot more. He wants everything he can skin every other country for. Perhaps Trump knows that we're in a Ponzi scheme/death match in which the strongest must diminish those weaker. It is a "net sum" game.

Justin doesn't want to rob other countries. He's content to rob Nature and rob future generations but, then again, he thinks we're still in the 80s. There's the problem. Whether it's Trump or Trudeau, Merkel or Xi, nobody wants to give up any territory that's not all but useless and absolutely no one wants to pick up the tab for restoring Nature's half of Earth.


“As with any public good, biodiversity conservation suffers from a free-riding problem, in which governments have an incentive to provide less than the optimal level of funding in the hope that others will cover the costs,” said Edward Barbier, an economist with Colorado State University, adding, “the current global biodiversity crisis is in large part due to the lack of international commitment and funding over the past 25 years.”

“It will take around $100 billion a year to protect the earth’s broad range of animal and plant species, and current funding fluctuates around $4-10 billion annually,” he said, illustrating the massive shortfall for global conservation.

In order to raise $100 billion a year — ten times more than is currently spent in the very least — Barbier argues we can’t just depend on governments but must turn to the private sector. He and his co-authors argue a any new agreement through the CBD should create a mechanism that would allow private corporations to join with their own targets and funding goals.

It's all peachy, in theory, but...  This is the era of "everyday low taxes." $ 100 billion a year, even spread around a bit, is serious money. That's war-waging level money. Of course this is where the private sector supposedly comes in.

“Corporations depend on the health of our eco-systems and are therefore at risk of losing the very foundations upon which their businesses rely,” explained Thomas Dean, co-author of the paper and sustainable develop professor at Colorado State University. ”Growing awareness of this challenge will increasingly motivate corporations to engage.”

The paper points to industries where biodiversity is vital to their bottom line such as fisheries, forestry, agriculture and insurance.

“For too long we have viewed corporate and environmental interests as adversarial. However they need to become aligned if we are to be successful both economically and environmentally,” Dean said. “After all, this is the fundamental purpose of an economic system — serving the needs of society in the short and long term.”

What? Did he just say our economic system works to serve "the needs of society in the short and long term"? Maybe on some other planet but not this one, not ours. I think somebody should tell this guy about shareholders, executive compensation and inequality. And the idea that the corporate sector serves anyone's long term interests, even its own much less society's, is risible.

The guys pulling the shirt tails of Trump in the USA believe in this....

We must not underestimate the power of the evangelists.
They are organised,wealthy and powerful.
They are the scariest thing I can think of.

.. 'throwing crumbs' about says it all ..
.. take take take & then take some more
seems how the government sees the Environment
Its some kind of rubber band bank account
to be pillaged into deep debt
and if anchor species lose their habitat
well, uh.. that's OK ..

That about sums up 'The Harper Legacy'
Wild salmon, polar bears, herring, orca
the grizzly, boreal caribou or wolves
It seems its Ok if they just exist on our coins
or postage stamps.. we don't deserve the real deal
The term 'imperiled species' does not resonate
where they count votes in advance via polls
and govern accordingly..

Ah yes, the "dominionists." Religious fundamentalism - Christian, Jewish, Muslim, Hindu, even Buddhist - is a scourge. It divides the world into "true believers" and enemies of the true faith.


Sal, I had great hopes that Trudeau, with his powerful majority, would sweep away Harper's failings and excesses but too often he has not.