This Is Bound to Piss Off Trump 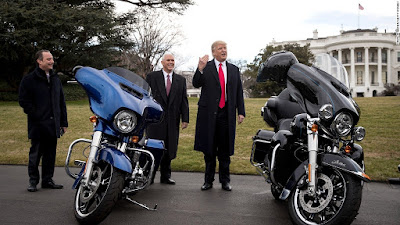 It's one of those iconic things that has become a symbol of America - the Harley Davidson motorcycle.  Foreign rivals have tried and tried to copy it but they're still seen as cheap imitations on the "real thing." Founded in Milwaukee in 1903, Harley's are sometimes called "Milwaukee iron."

Now, faced with countervailing tariffs from the European Union, Harley is moving production and jobs to Europe, the company's second largest market. The Wall Street Journal reports that Harley-Davidson has been hammered on both fronts. At home it has been hit by higher prices for steel and aluminium due to Trump's tariffs. To add insult to injury now it's facing European tariffs on its motorcycles.

Whether or not the move leads to any job cuts, “iconic American brand moves manufacturing overseas” is almost certainly not the sort of headline the Trump administration was hoping its aggressive trade tactics would generate. It was also foreseeable: Our trade partners have a long history of responding to American protectionism by targeting politically sensitive products with tariffs of their own. While Harleys may not be a huge U.S. export, they are important in Wisconsin, which Trump carried by a hair-thin margin in 2016. As the Guardian notes, China also seems to be strategically placing tariffs on politically important exports, such as soybeans, which are produced in Trump-voting states like Iowa.

But hey, at least steel prices are rising in the U.S. thanks to the tariffs. That has to be good for American manufacturing, right? Right? Oh.

I have found it hard to understand, Mound, that while it is clear Trump is a moron, he somehow didn't seem to consider there would be any retaliatory measures against the U.S. imposition of tariffs against its trading partners. Do you think this strange blindness might also be a function of American arrogance?

.. somewhere I have seen an article in a mag like Time or..
that looks at the State of Texas.. Mainly at its changing demographics
but also at its reliance on beef sales to Mexico among others

This is not your father or grandfathers Texas..
nor does it resemble a tv show named Dallas
Its about how the generations have swallowed demographics
I don't recall the percentage of Texans of hispanic origin
versus the shrunken percentage of remaining 'old Texans'
but the facts were clear.. Texas was not
and never would be again the old Texas of my perceptions

The other inference was.. If was possible it could be
like California.. but not if the old guard clung too hard
to remaing power and that old heritage.. or vestiges of cowboys

But again, it was the reliance on exports to Mexico
that caught mt attention.. how vulnerable it was
not just to drought or coastal flooding.. but its economy
was integrated to exports and exchange with Mexico

Similar import/export scenarios are seen way to the north
Explore the border states with Canada and their economies
Maybe Trump forgot this.. as did his brain trust
but some things are very real, very entwined
and that runs east from Washinton State
all the way to Maine

Hell my ancestors walked home from the USA
to Manitoba in 5 minutes.. or rode a tractor back n forth
If a neighbor needed an extra wagon or brace of plough horses
they were right there, 5 minutes away
Sure there were different flags on the porches
and different rules re alcohol !!
Haha.. yes.. the Prohibition ! .. Not here !


Lorne, Trump has surrounded himself with extremists - Pompeo, Bolton, Navarro, Haspel. I read today that he no longer listens to Mattis, arguably the last true voice of reason in this moron's administration.

His trade advisor, Peter Navarro, is widely considered as irrational. If you read his bizarre political and economics record it reveals a guy who bounces from pillar to post. Yet he has Trump's ear.

Trump wants sycophants, he gets sycophants. Those who try to restrain him get shown the door.


Trump's base, Sal, are all about demographics. Trump is going to Make America White Again in their feverish imaginations. Yet America becomes less white by the day and, short of ethnic cleansing, that appears to be unstoppable.

The flip side of this is that Europeans, Japanese and South Koreans will now have to build more auto-plants in America.

Like The Donald said, trade wars are easy to win. It's win-win for everyone except upper-crust moochers.

(Free-trade globalization has always been an enormous loser for everyone – except blue-blood oligarch-wannabes.)


Well, Anon, The Donald and his daughter/wife manufacture their merch in Asia and then flog it primarily in the United States. His shtick is for suckers - like you.