How Profoundly Stupid Are Trump Supporters?

Stupid enough that they can't tell a restaurant in Collingwood, Ontario, Canada, from a restaurant with a similar name in Lexington, Virginia, God Bless the USA.

The Canadian owner of the Canadian Olde Red Hen restaurant was alarmed after her TripAdvisor page was flooded with negative reviews from Trump trolls who had obviously never been in her establishment and apparently couldn't remember what country they were in.

Their intended target was the Red Hen restaurant of Lexington, Virginia that had shown Sarah Huckabee Sanders and her party the door over Trump's immigration/separation calamity.

Lexington, Virginia - Collingwood, Ontario, how can you tell them apart. That's just an 11-hour drive and an international border crossing between them.

Trump's posse prevailed in the end.  Red Hen owner, Stephanie Wilkinson, today resigned as a director of Main Street Lexington, a business council which works to improve the city's downtown.

Wilkinson's restaurant has been the scene of protests by typical Trump supporters such as this old white guy: 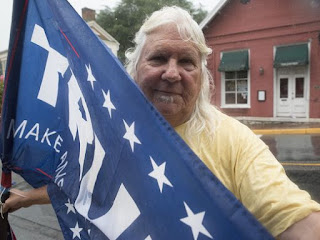 “The salient fact of American politics is that there are fifty to seventy million voters each of whom will volunteer to live, with his family, in a cardboard box under an overpass, and cook sparrows on an old curtain rod, if someone would only guarantee that the black, gay, Hispanic, liberal, whatever, in the next box over doesn’t even have a curtain rod, or a sparrow to put on it.”

BTW, they're not "stupid". Little Red Hen's all the media's reporting on in 8 countries.

The stolen missing babies, the missing girls, the murdered children, the suicides, the Concentration Camps all still out of the news.

Why is it no one will recognize the truth?

"Invasion of the Body Snatchers" is happening before our very eyes.
They have subsumed almost 40% of the American population.

It is the only plausible explanation!

There is an explanation for this..

Wasn't there some US beauty queen who couldn't find Kansas on a wall map? Actually it was worse than that:


The lack of interest in geography isn't confined to Trumpians. Normal people wandering around in Halifax had no general idea where Jamaica or PEI was. Not the faintest clue. I spent five years in the UK and your average dope had no clue where Canada was.

It's why satnav is so prized in vehicles.

It's the Keynes rule.

These pussy-hat wearing Trump supporters are missing the point. Trump is about standing pat in the face of temper-tantrum-throwing infants who try to bully and baffle the people with BS. Not letting hysteria define or stifle the debate.

Trump supporters should cheer when hippy fanatics throw Republicans out of their businesses (which are probably not very many; so not many opportunities like this will arise.) Because Americans will look at their actions and the words of support from the rest of the Cultural Left and they will be disgusted by it all.

If True Progressives want more out of this pivotal point in human history than self-righteousness predicated on tangential rhetoric, they better start taking stock of what they hope to accomplish. The radicals stand in your way – and half of them are neoliberal instigators in hippy clothing.

That's what I love about Trump, he transformed the Republican party overnight into the anti-neocon anti-free-trade party. It's unbelievable!

I've been waiting on Fair Trade my whole life, and a Republican game-show-host is bringing it to the world!

Actually that's the "Keyes rule." Trump is largely Keynesian. Before Milton Friedman, "we were all Keynesians" then.

"27 Percenters – Those Americans who will predictably vote against their own best interests. In his seminal post on the Crazification Factor, John Rogers used the 2004 Obama/Keyes senate race as a measure: “Keyes was from out of state, so you can eliminate any established political base; both candidates were black, so you can factor out racism; and Keyes was plainly, obviously, completely crazy. Batshit crazy. Head-trauma crazy. But 27% of the population of Illinois voted for him. They put party identification, personal prejudice, whatever ahead of rational judgement. Hell, even like 5% of Democrats voted for him. That’s crazy behaviour. I think you have to assume a 27% Crazification Factor in any population.”

My take on this concept is that core conservative voters will always vote along party lines no matter what they are voting for. (Same with core "liberal" voters.) And they will always show up on election night to vote.

All this goes to show that bandwagon jumpers are really the problem. They mindlessly follow along. And rarely do they get a leader who leads them in the right direction.

It's better if people think for themselves rather than being manipulated by rhetoric and tribalism.

BTW, it's "Keyes" not "Keynes." And "Balloon Juice" certainly lives up to its silly name.

.. fact - if I was in a restaurant & a Huckabee Sanders group was seated beside us.. I would politely request to be seated elsewhere. If that woman is frightening on tv.. I need to be nowhere near her in real life. As a seasoned 'hospitality' veteran.. and I do mean seasoned.. If I saw her & her entourage or family outside a restaurant.. I would advise them, 'we will seat you, but cannot guarantee anyone will agree to serve you' .. and just let that hang. I have, on occasion had to deliver bad news to clientele.. and did so, humbly but with dignity. ' You, sir are cut off.. do you require a cab or assistance to find the door.. may I assist you from your seat?' How the old geezer got in so impaired was the question.. our waitresses and doorman were eagle eyed. But hey, stuff happens.. he certainly was never served

The 'refusal of service' Huckabee Sanders episode is just a distraction.. tho intriguing. Its kind of like the Trump 2 scoops dessert tale from Time mag journos.. its fluff. Distracts from the grim reality of deceit, collusion, greed, nepotism.. Trump 'likes' nobody.. repeat.. Nobody ! The Melania thang is fabrication.. she is less than a hobby.. more a useful occasionable appendage. The children ? He hates them, including Ivanka.. Then there are the ex wives, witches to him

The US population ? Just 'marks' to Donaldo th Trumph
If there was a modern example of Marie Antoinette
& 'let them eat bread' - we have found him ...

Heard an interesting talk on CBC this morning:

Hugh, thanks for that link. He sure makes Tony Blair out to be a crook.