Nobody Escapes the Ford Nation. Not Even Me and I'm Out On an Island in the Pacific 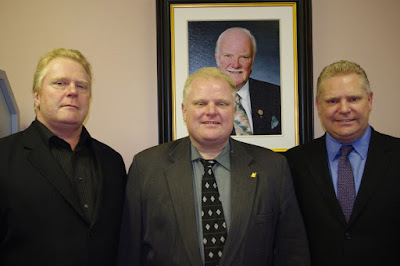 I'm not sure you would want to see any of these guys roll up your driveway on a dark night. They're the Ford boys. Dad, Doug Sr., is gone. Youngest son and former TO mayor, Rob, is gone. It's now just Randy (left) and Doug Jr. (right).

Rob was a comedy magnet for late night talk show hosts and his antics were regularly celebrated in newspapers around the world.

Randy, well he's Randy. He doesn't venture into the spotlight much but there are reasons for that. Which leaves the man of the hour, Doug Jr., leader of the Ontario PCs and currently in a neck and neck battle with the NDP's Horwath to become the province's next premier.

If I've learned anything about the Ford boys it's that there is usually more and less than meets the eye whenever you take a close look at them. Dougie's pitch to voters is that he's a reliable, successful businessman. Maybe but that must've been in an earlier life. According to a Globe and Mail article from 2014 suggests Doug Jr. may not be the titan of business he claims and may in fact have been a setback for the once profitable company the boys inherited from their father, Deco Labels and Tags.

Well, with the provincial election just two days away, Ontario, our thoughts and prayers are with you.
Posted by The Mound of Sound at 5:39 PM

And we'll need them! As a teacher, it's a nerve-wracking time! Everything could get so much worse starting Friday.

.. as a current Ontarian.. I am left wondering how many votes for The Doug will evaporate. Of course some folks care not if you fleece and scam a widow and two kids or hide Company Shares by selling them to Randy for 1 $ .. and we are seeing those kind of folks coming out of the woodwork in droves n hordes.. This is the era that was marked by Steven Harper's discovery (and now Trump) that by issuing a bald faced lie or mistruth every day. or even twice a day.. nobody could keep up.. Lie your ass off is the new policy. Look at Trump re the Philly Eagles.. none of whom took a knee last year during the military posturing and anthem singing.. Trump? ' yes they did'

Harper re all sorts of matters.. 'I knew nothing of these matters' - if you could be more vague.. or evasive, I don't know how.. and there was Ray Novak & Jenni Byrne and her twin sister .. always lurking in the background.. plus Nigel Wright.. who was rewarded for his scam to 'look after' the Canada Pension Plan Fund.. can you spell 'inside investment information' ? Just get Laureen to do the stock transactions with the Harper Family 'blind trust' - This crap is now status quo - daily.. When do hear from Justin about an aged (65 years) pipeline evaluated at 550 million $ being purchased by taxpayers for 4.5 Billion.. Say what ? Plus we've been subsidizing Texas based Kinder (Enron) Morgan from Day One.. Like Site C - the Christy Clark Memorial Dam.. the bill may hit 20 Billion.. each. As Yogi Berra once said ' it aint over till its over'

World's worst bosses: Guys who grew up privileged, never worked outside the family firm and then inherited the company.
Bad for business, worse for employees.

If Ford gets elected premier it is another canary in the coal mine moment. And one that will likely be sadly ignored.

Extinction event here I we come!

Ford's legal team, Robin, Cheatam and Howe,will be making a statement after everybody votes.

And they call themselves a success story.

I see someone who has a band, writes books and is to me anyway, inexplicably featured on progressive bloggers, has doubled down on how Doug is jest a great guy. His sister-in-law is obviously not of the same opinion.

If as now seems likely, Ford becomes premier of Ontario tomorrow, you can then add people of the GTA to the ranks of the Gullibillies. People out in the countryside were already PC supporters come what may. Ford's coming into power as Trump decimates Ontario with tariffs will be a sight to behold in coming months.