What's That Wobble? Oh, It's the Alignment.


When your car's steering gets wobbly it's time to get it into the shop and have it re-aligned.

Maybe it's time Canada did something along those lines. No, not just countervailing tariffs against American goods, something more significant. Perhaps we need to re-align our foreign and military policy.

Here's a good way to start. Let's order a new fighter jet for the Royal Canadian Air Force. Not the Lockheed F-35. Not even Boeing's F-18 Super Hornet. Let's go with the Swedish SAAB Gripen. 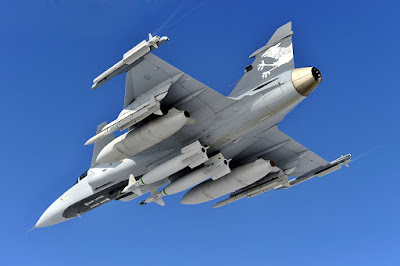 It's powerful, capable and, relatively speaking, affordable. Did I mention it's also Swedish?

With the Gripen we can still be America's loyal ally in North American air defence and we can meet our NATO obligations. What we couldn't be is a member of America's Aerial Foreign Legion. To get into that you have to buy the F-35 not so stealthy bomb truck. Unless you think Canada should be part of a first strike attack on China or Russia we really don't need the overpriced, under-performing F-35. And after Boeing's mugging of Bombardier we don't need them either.

Agreed. If they're going to go single engine then this makes a lot more sense.

Nothing would say screw you USA more than purchasing a european aircraft.
It could be both a good military purchase and also a political statement.
Recently the USA criticised both India and Turkey for purchasing Russian missiles and they also made veiled threats of various financial implications.
Someday the USA bullying has be confronted.
Trump has brought the bullying, which has been ignored at worst and put up with at best , to a head.
Access to the USA market has come at a huge cost to the world where it has used that access to manipulate sovereign countries foreign policy.
Yep; time for a change of direction.

It's not a bad choice, but the single engine is an issue for long northern patrols (even with improved reliability since the CF-18 was chosen as our fighter).
Might I suggest the Rafale or Eurofighter Typhoon? Both proven and if not as affordable still cheaper and more functional than the F-35.
Even better idea: a competition between those three aircraft to choose one for purchase, and in the meantime a stopgap purchase of the Alenia Aermacchi M-346 Master. It's a transonic trainer, twin engine jet that would fill many of our needs just fine. Upgrade the electronics somewhat if you wish. It will do most of what Canada needs, without the high cost (unit cost is ~20 million US, so you can get four instead of ONE F-35).

Perfect solution for Canada: get more for less, and retain a few squadrons of higher capability fighters (if we must) for domestic defense and 'prestige' while increasing the size of our fighter/recon/close air support force with Masters.

Maybe be REALLY clever and see if the Italians will give Bombardier the tooling and license to manufacture them domestically and breathe some more life into our industry. More jobs and good ones.

Raphael and Eurofighter would bend over backwards to strike a co production agreement with Canada.
Both are capable aircraft that would serve our interests.

Before we can purchase any military equipment we have to ask ; what is our foreign policy?
Since WWII it would seem that the western nations have become subservient to USA foreign policy and hence western military purchases mirror USA demands.

It's time to stop that nonsense.

off-topic ...
I know you are still celebrating the Ford Nation triumph so to further brighten up your day....

"Mitt Romney has a prediction: Donald Trump will “solidly” win a second term in 2020
“Mitt’s a straight shooter — whether people love him or don’t love him,” President Trump told reporters in response"

FWIW, I think Mitt is wrong and Mike Pence will be elected President in 2020 after the grateful nation says goodbye to a retiring (and likely ailing) Trump.

Who are "we" planning to kill with these weapons of mass destruction"?

Ray Blessin asked, "Who are "we" planning to kill with these weapons of mass destruction?"

Good question. Canada is unable and often unwilling to defend its own borders yet we keep sending troops and equipment to fight in foreign wars. It makes no sense to me to keep making enemies abroad in order to keep our border with the US open for trade which is what it seems to be that we are doing.

@ Ray. If we're lucky, no one. Maintaining some measure of self-defence capability, however, has been shown to be essential to national sovereignty. History, Ray, history.

@ Mound.
So Canada needs something to patrol the 49th parallel?