This Would Work - Wouldn't It? 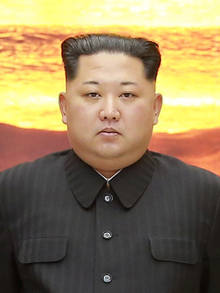 Trump, being Trump, needs Kim to throw him a bone - something, anything, he can proclaim an outstanding victory when he returns to his base. Here's an idea.

Why doesn't Trump offer Kim a little something, maybe state recognition, in exchange for Kim offering to dismantle his country's longest range missile, the one everyone is afraid could hit Hawaii or even the US mainland.

Kim's long range missile is basically a waste of time. He could launch a couple. Maybe one might get through to some worthwhile target but, before it landed, dozens of proven and very reliable US missiles with their multiple but independently targeted warheads would be enroute to turn North Korea into glass.

It's enough that Kim can maintain a credible threat to South Korea and Japan. That's all he needs for nuclear diplomacy. And Trump gets to come home claiming that he has tamed the monster.
Posted by The Mound of Sound at 8:49 AM

Make no mistake...Kim has other areas in the North of North Korea that he hasn`t told Trump about.


I'm guessing that Washington has North Korea under pretty intensive sigint and satellite reconnaisance. There's not probably a whole lot that goes on there they don't know about when and as it happens.

Two well aimed ICBM's are going to ruin everyone's day.
Kim has all he wanted, imho, that is recognition as a world power.
Any warfare in the area could well escalate as South Korea would take the beating and China could retaliate in defence of North Korea.
Kim won round one.
He will likely win round two.
In the end we ,the world, will just have one more idiot with nuclear weapons.

If anyone in this world is likely to use nuclear weapons it is Netanyahu against Iran.

He was dealt a lousy hand and he is playing it brilliantly.