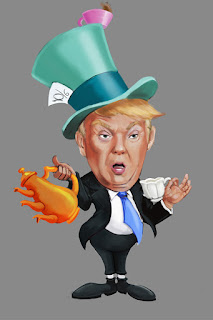 Donald Trump likes to pretend he's shaking everything up. In fact he's tearing everything down and what he can't tear down his instinct is to bog it down. You could say that he's the first poster boy for the Age of Entropy.

Yesterday I reviewed an article by political scientist and historian R.L. Schweller published in the June, 2014 volume of Foreign Affairs.

International politics is transforming from a system anchored in predictable, and relatively constant, principles to a system that is, if not inherently unknowable, far more erratic, unsettled, and devoid of behavioral regularities. In terms of geopolitics, we have moved from an age of order to an age of entropy.

...How did we get here? The shift began in the twentieth century, with the advent of nuclear weapons and the spread of economic globalization, which together have made war among the great powers unthinkable. ...The absence of cataclysmic wars among great powers has obviously been a great boon. But it has also come at a real cost.

In their absence [wars of  major power ascension], we no longer have a force of “creative destruction” capable of resetting the world. And just as seas become foul without the blowing of the winds, prolonged peace allows inertia and decay to set in.

Too much peace. Too little war. Mutually assured destruction. Neoliberalism. Stagnation. Failure of the world order. Chaos. In this Age of Entropy, Schweller thinks Trump is all America needs. Many would disagree.

Merkel, Macron, Trudeau and Abe are trying to bolster the international order but they've been virtually powerless to arrest the decline of liberal democracy and the rise of authoritarianism - Turkey, Hungary, Poland, Austria and even America. It seems chaos is indeed overtaking the world order. Authoritarianism has not only taken hold in these countries, it is a rising force in most others - Germany, France, the Netherlands, Britain and, yes, even our own Canada.

The longer leaders like Trudeau obsessively cling to globalism, the greater the appeal of authoritarian voices. People lose faith in their central governments as being under the sway of corporate interests and not in service to the public interest. If that was a crime you could convict every prime minister going back all the way to and including Mulroney. Democracy stagnated with the adoption of the neoliberal model and now democracy has succumbed to "inertia and decay."

As long as Trudeau's focus is on expanding trade and perpetual, exponential growth in the GDP he cannot focus on what ails us. He needs to be putting all his efforts into restoration of progressive democracy and there's an enormous amount of work that needs to be done in a shrinking window of opportunity. We have seen how other countries have succumbed or are at the cusp of illiberal democracy and worse. Doug Ford's victory yesterday is a wake up call. The election of Stephen Harper was a wake up call. Yet we sail into this becalmed, stagnant and foul sea and pretend nothing is wrong.

"Merkel, Macron, Trudeau and Abe are trying to bolster the international order but they've been virtually powerless to arrest the decline of liberal democracy and the rise of authoritarianism"

You seem to be sucking and blowing at the same time. You both praise and condemn the neoliberal globalist 'new world order' that has brought 40 years of economic and social decline and disaster.

Your Second-Sober-Thought "liberal democracy" – i.e., putting the wolves in charge of the hen-house on the premise the hens are too dumb to manage their own affairs – is the problem.

Open, accountable, democratic government of, by and for the people may not be ideal, but it's the best of all worse alternatives – including digging up fascist, Western, gilded-age oligarchy from the dustbin of history.

Constitutional democracy protects minority rights. No need to reinvent the wheel. Just put the wheels back on the vehicle so society can move forward.


What sucks, Anon, is your idea that I praise the neoliberal globalist "new world order." There's more than a decade of posts on this blog. There should be no end of posts praising the globalist order. Can you refer me to a few? Take your time, I'll wait.

This blog, as you've plainly not noticed, is dedicated to the restoration of progressive democracy. That is antithetical to globalism although perhaps you don't understand the meaning of those terms.

You plainly have no idea of the meaning of liberal democracy. It's pointless for me to engage you about something you cannot understand.


Toby I don't think anyone knows where Trump will take America. He does not operate from a knowledge or logic foundation.

In this complicated world Trump and other populists appeal to those that are unwilling to challenge the status quo and seek any easy way out.

Populists appeal to those looking for simple answers to complicated problems.

Trump/Republicans offered lower debt but are increasing it.
Future generations will pay for that decision as will Ontario residents with the election of Ford.

We are losing our ability to think through problems. We can identify problems. But we only vent our anger at them. Ford is merely the latest example of that phenomenon.

Trump is the only one making sense on economics. Upper-crust looters ship all the factories out to the undeveloped, unregulated world then claim all the jobs are lost to automation. It's a con job!

Fake Economists are simply corporate priests who put the holy imprimatur on Robber Baron raping and pillaging. These engineers of destruction tell us the bridge they built was supposed to fall in the water! It's economic science! It's an economic miracle!

John Maynard Keynes created the centrist, "New Deal", mixed-market system during the Great Depression. Here's what he had to say about economists:

"Today we have involved ourselves in a colossal muddle, having blundered in the control of a delicate machine, the working of which we do not understand."

"Economists set themselves too easy, too useless a task, if in tempestuous seasons they can only tell us, that when the storm is long past, the ocean is flat again."

"Good economists are scarce because the gift for using 'vigilant observation' to choose good models, although it does not require a highly specialised intellectual technique, appears to be a very rare one."

(Fancy way of saying almost all the economists of his day were corrupt. The MOAR things change...)

"If economists could manage to get themselves thought of as humble, competent people on a level with dentists, that would be splendid."

"The study of economics does not seem to require any specialized gifts of an unusually high order. ... Yet good, or even competent, economists are the rarest of birds."

"Economists must leave to Adam Smith alone the glory of the Quarto, must pluck the day, fling pamphlets into the wind, write always sub specie temporis, and achieve immortality by accident, if at all."

(Getting literary on their arses on that one! On us all!)


Keynes wrote a great many things, Anon. You cherry pick like a true TV evangelist.