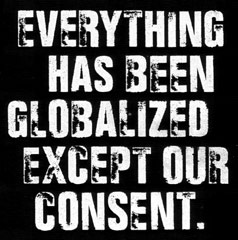 Guardian enviro-scribe, George Monbiot, hates NAFTA. He thinks it a scam perpetrated without the consent of the peoples of Canada, America and Mexico by their political bosses. Monbiot especially detests the ISDS or Investor-State Dispute Settlement clause. He also defends Donald Trump's demand for a 5-year "sunset clause."

In seeking to update the treaty, governments in the three countries have candidly sought to thwart the will of the people. Their stated intention was to finish the job before Mexico’s presidential election in July. The leading candidate, Andrés Lopez Obrador, has expressed hostility to Nafta, so it had to be done before the people cast their vote. They might wonder why so many have lost faith in democracy.

Nafta provides a perfect illustration of why all trade treaties should contain a sunset clause. Provisions that made sense to the negotiators in the early 1990s make no sense to anyone today, except fossil fuel companies and greedy lawyers. The most obvious example is the way its rules for investor-state dispute settlement have been interpreted. These clauses (chapter 11 of the treaty) were supposed to prevent states from unfairly expropriating the assets of foreign companies. But they have spawned a new industry, in which aggressive lawyers discover ever more lucrative means of overriding democracy.

The rules grant opaque panels of corporate lawyers, meeting behind closed doors, supreme authority over the courts and parliaments of its member states. A BuzzFeed investigation revealed they had been used to halt criminal cases, overturn penalties incurred by convicted fraudsters, allow companies to get away with trashing rainforests and poisoning villages, and, by placing foreign businesses above the law, intimidate governments into abandoning public protections.

Under Nafta, these provisions have become, metaphorically and literally, toxic. When Canada tried to ban a fuel additive called MMT as a potentially dangerous neurotoxin, the US manufacturer used Nafta rules to sue the government. Canada was forced to lift the ban, and award the company $13m (£10m) in compensation. After Mexican authorities refused a US corporation permission to build a hazardous waste facility, the company sued before a Nafta panel, and extracted $16.7m in compensation. Another US firm, Lone Pine Resources, is suing Canada for $119m because the government of Quebec has banned fracking under the St Lawrence River.

As the US justice department woke up to the implications of these rules in the 1990s, it began to panic: one official wrote that it “could severely undermine our system of justice” and grant foreign companies “more rights than Americans have”. Another noted: “No one thought about this when Nafta implementing law passed.”

Nafta obliges Canada not only to export most of its oil and half its natural gas to the US, but also to ensure that the proportion of these fuels produced from tar sands and fracking does not change. As a result, the Canadian government cannot adhere to both its commitments under the Paris agreement on climate change and its commitments under Nafta. While the Paris commitments are voluntary, Nafta’s are compulsory.

Were such disasters foreseen by the negotiators? If so, the trade agreement was a plot against the people. If not – as the evidence strongly suggests – its unanticipated outcomes are a powerful argument for a sunset clause.

...Those who defend the immortality of trade agreements argue that it provides certainty for business. It’s true that there is a conflict between business confidence and democratic freedom. This conflict is repeatedly resolved in favour of business. That the only defender of popular sovereignty in this case is an odious demagogue illustrates the corruption of 21st-century liberal democracy.

...Trump was right to spike the Trans-Pacific Partnership. He is right to demand a sunset clause for Nafta. When this devious, hollow, self-interested man offers a better approximation of the people’s champion than any other leader, you know democracy is in trouble.

"When this devious, hollow, self-interested man offers a better approximation of the people’s champion than any other leader, you know democracy is in trouble."

True, but as most of us know, tRump has his own motives for these positions and his alternatives will likely be worse.

If only the candidate version of Trump had survived the inauguration.


Trump's motives are really beside the point, NPoV. How many times have I written that these ISDS clauses are inimical to our democracy? How many times have I written that ISDS undermines our national sovereignty and creates a wedge between our elected representatives and the public that elects them to power, a principal cause of the disaffection that, today, is leading to radical right populism?

BTW - those are rhetorical questions.

It's difficult to negotiate with Trump because he either doesn't clearly and consistently explain his problems with the agreement, or because he does not consult with congress, the states or industry (let alone labour or the environmental community) about what they'd like to see in an agreement, leading to doubts that what his team is negotiating will fly.

So just dealing with Trump sucks a lot of the mental energy of Canada's and Mexico's negotiators. But there is a lot more Canada and Mexico could do to better imagine a future Nafta that takes into account the grievances commonly felt by governments and people in all three countries. I'd rather have Nafta than not have Nafta, but why can't Canada be making the case for a better Nafta?

I have to agree with Monbiot on this. The various free trade agreements have never been about free trade.

It would seem that not only are our 'regulators' captured, but also our federal government. From a most likely scam of a pipeline, to support for a never-ending NAFTA with ISDS, and refusal to borrow from the Bank Of Canada in favour of interest laden private loans.

But how permanent the advantage? America will have to ensure that Trump remains in charge until he can choose a qualified successor. I wonder what information and private assurances were exchanged in his private meeting with Kim, besides the predicable money laundering tips. No doubt more to come through some new and innovative back channels. In any case, one war might be over for now until a revised iteration can provide some future usefulness.

Finally someone on the Left is talking sense.

If your friends do nothing but screw you over and bleed you dry, perhaps they are not your friends.

We don't live in a polarized universe. But we do live a polarized world. The Masters of the Universe call it: divide and conquer.

HERE'S MY EARLIER JUNE 11 COMMENT ON THE SUNSET CLAUSE AND DEMOCRATIC OVERSIGHT ON TRADE: IT'S AN IMPORTANT PROGRESSIVE ISSUE WHICHEVER WAY YOU SLICE IT

Trump is right on free-trade globalization. It's simply a scam that makes oligarchs on both sides of the transaction dangerously wealthy and powerful liquidating Western living standards and democratic institutions.

They said trade would make China more like the West. But it has made the West more like China. And China recently ditched all pretenses appointing Xi emperor for life.

Trump is right to stand up and say 'no more.' And what's surprising is how rare it is to see a leader who says he's going to represent the interest of the American working class – all Americans, not just the 'middle class' – and actually mean it.

Fake Politicians are so good at pretending their hands are tied, we came to accept that democratic government could be nothing more than a pretense. (The Grand Generation spins in their graves.)

Now someone has come along and taken tremendous action after 50 years of downward spiral.

Trump says this trade problem goes back 50 years to when Nixon went to China to create free-trade globalization. That's why he demands a SUNSET CLAUSE. To ensure that these trade deals have DEMOCRATIC OVERSIGHT. To ensure they don't spiral out of control all over again.

Why? Americans can't depend on someone man enough like Donald J. Trump to come along every 50 years and stop upper-crust raping and pillaging run amok.

It's better if it doesn't start in the first place.