If the Official Reason Doesn't Make Any Sense, Look Elsewhere. 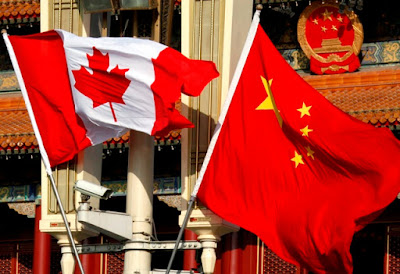 I know, I know that sounds like the stuff of conspiracy theories. Oswald didn't kill Jack Kennedy, it was the CIA or little green men from Mars. Still, it's hard to reconcile the federal government's purchase of the Trans Mountain pipeline with the mountain of lies, broken promises and utter illogic.

Bruce Livesey, writing in The Guardian, suspects there's a Chinese angle that's driving Trudeau to go to any lengths to keep the Trans Mountain pipeline alive.


Trudeau’s ferocious desire to build the pipeline at any cost seems bizarre on the face of it. Ostensibly, his government claims the pipeline is good for the Canadian economy. But the pipeline will be shipping unrefined oil – known as bitumen – to be refined in the US and Asia. This will cost oil refinery jobs in Canada, which is where most employment in the oil industry exists. Canada has been closing refineries for years now. The pipeline will only accelerate this trend.

Moreover, developing the oil sands ensures Canada will never come close to meeting its commitments to the Paris climate accord. In 2015, Trudeau promised to cut emissions dramatically: 30% from 2005 levels by 2030. But most of the oil in Alberta’s tar sands will have to stay in the ground to prevent a global warming catastrophe.
So what’s going on?

This agreement, ratified in 2014, was negotiated by the previous Harper government. It was passed without a vote in Parliament. Fipa, which remains in place until 2045, was signed to ensure that China got a pipeline built from Alberta to BC, among other benefits.

...Yet this Fipa is the sort of agreement that undermines the sovereignty of nations to the benefit of private interests. Fipas are Canada’s name for bilateral investment treaties, which are frequently used by corporations around the world to challenge public policies or community decisions that interfere with their ability to make money. Canada’s first Fipa took the form of a single chapter in the North American Free Trade Agreement (Nafta). Since then, Canada has paid out $160m to US corporations who challenged public decisions, including environmental policy. Canadian mining companies are using Fipas with developing countries to claim damages from community opposition to unwanted mega-projects.

In the case of the Fipa with China, it notably allows Chinese energy companies to challenge local, provincial and federal policies or laws that interfere with their “right” to make a profit from energy projects. So any environmental regulations, or halted pipelines, or First Nations land claims, could be subject to lawsuits brought by Chinese corporate interests. (Conversely, Canadian companies operating in China have the same rights to do the same thing over there.) A clause in the Fipa, called Investor State Arbitration, gives them this capacity.

“More troubling, there is no requirement in the treaty for the federal government to make public the fact of a Chinese investor’s lawsuit against Canada until an award has been issued by a tribunal,” Osgoode Hall international investment law professor Gus Van Harten has noted.

“This means that the federal government could settle the lawsuit by paying out public money before an award is issued, and we would never know.”

...Trudeau is desperate to keep China happy. A senior Chinese official said this will require Canadian concessions . In 2016, his government began negotiating a free trade agreema on investment restrictions and a commitment to build an energy pipeline to the coast”.

Trudeau is desperate to keep China happy. In 2016, his government began negotiating a free trade agreement with China. At the time, the Globe and Mail reported, “a senior Chinese official said this will require Canadian concessions on investment restrictions and a commitment to build an energy pipeline to the coast”.

Now he has bought that pipeline, and will have to live with the political fallout, which will likely include protesters, court cases and other acts of civil disobedience. In what might be a strategy to avoid lawsuits from Chinese companies that may result in massive secret payouts, Trudeau’s government may find itself arresting Canadians.

China wants its bitumen. We better let them have it, or else they'll sue us. Great.

Ahh this is good news here in Stepford, we can blame it on Harper. :)


It's about as plausible an explanation as I've heard for JT's reversals and broken promises. He even gets trade with China and peace with Notley for the low, low price of trashing British Columbia. And that, by Trudeau's reckoning, is the "national interest." China plans to skin Alberta on the bitumen price and refine the stuff itself. It's not interested in full refined oil products. It can get that stuff from the Saudis.

Still Trudeau knows he can't come clean with the Canadian people about his definition of national interest.

Well some how I don't think the Chinese govt run industries worriy about labour costs, so they are getting thier resulting oil at bargain prices.

This actually makes sense since Chinese companies have bought up oil sands developers - with Harper’s approval, of course.

if you are interested in the story of that treaty from an insider there is a book. Sold down the Yangtze by Gus Van Harten. I got to about half way before it became too depressing reading Harpers sale of Canada on the cheap with no return value to ordinary Canadians just the rich as near as I could figure out.

China is a double edged sword.

If this theory is correct, why did Trudeau avoid blaming Harper for the mess? Gee, he could have loudly pointed his finger at the conservatives and skated around it. Instead, he digs the hole deeper and takes it on himself. Or am I misreading it?

why did Trudeau avoid blaming Harper for the mess?

Because Trudeau is not as smart as he, or others, thinks he is.

As my old boss said, many many years ago, whilst discussing doctors.
There are doctors that came top of the class and doctors that nearly failed their exams.
And so it is for all 'professions'.
Trudeau is like Trump; in being incapable of the job he is in.

A few examples of 'free' trade.

Perhaps we should skip a stage and vote for someone on the board of directors?

1984 just did not work out as planned!
It should have been The Americas Ltd vs Europe ltd vs Asia Ltd.
Losing corporate Europe has screwed things.


At the 6 month point in his government, Trudeau said that, above all, he was a free trade. Global free trade was his priority. He embodied that sentiment in the mandate letters he issued to all of his cabinet. It would be illogical of him to repudiate a free trade deal cooked up by Harper with the largest economy in the world.

I only wish he'd been honest with us and fessed up that the "national inerest" he was serving was China's not Canada's.

Not to mention the Chretien-Demarais Gang.

Oswald didn't kill Jack Kennedy.
That is the fact.