First it was Roseanne. Now it's Tom - and Michael. Vice Goes After Trump.

We know which side Roseanne is on. Now her ex, Tom Arnold, is jumping in and he's on the other side. Arnold is now working for Vice to track down long rumoured tapes and other evidence about Donald Trump - "unplugged" if you will. And he claims to have picked up one partner already - Michael Cohen. 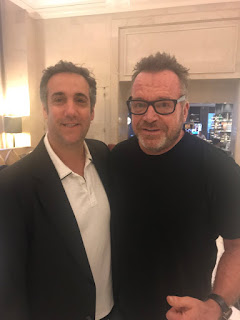 President Donald Trump's embattled personal attorney, Michael Cohen, retweeted a photo of himself with comedian Tom Arnold — who happens to be working on a show with Vice that features him hunting for unflattering video of Trump.

Arnold told NBC News early Friday that Cohen ― who is under investigation by federal prosecutors ― talked to him for the show, which is expected to air later this year.

"We’ve been on the other side of the table and now we’re on the same side," said Arnold, an outspoken Trump critic.

"It’s on! I hope he [Trump] sees the picture of me and Michael Cohen and it haunts his dreams."

Vice announced in May that it had tapped Arnold to helm a show called "The Hunt for the Trump Tapes," and investigate whether rumored tapes from the past showing the president in a negative light actually exist.

"The host will draw on his high-profile network of celebrity friends, entertainment executives, and crew members he's met over more than 35 years in showbiz to dig for evidence on Trump's most incriminating moments — and, being a comedian and all, he'll have a little fun along the way," Vice said in the announcement of the show.

"He'll be backed up by a handful of experienced journalists, and — aside from trying to uncover the tapes themselves — he'll look into the companies and tycoons who have allegedly fought to keep the damning recordings a secret."

Arnold would not say whether Cohen was planning to give him any tapes he might have of conversations with Trump.

Gee, now that an entertainment celebrity is doing some tRump hunting, do you think the NEWS media might actually start covering real stories?

The Pentagon dropping bombs around the world is a dog-bites-man story, NPOV. It would be news if they stopped.


Around the time of the last election Arnold surfaced with tales of tapes - outtakes and behind the scenes stuff - from The Apprentice that he claimed were full of every sort of bigotry. I would assume some aspect of that underlies his new relationship with Vice.

No. It is a huge story not covered by media. They choose to engage in and spread willful ignorance.

the amount of on-going carnage (5 per hour on average) surprised me and I try to stay well informed.

How many Americans would answer YES to
are we at war?