A Death Sentence for Being Gay in America. 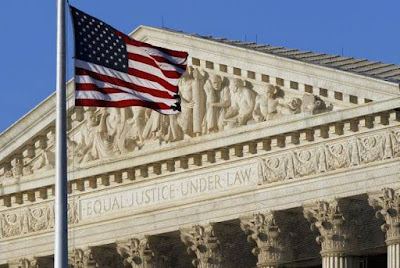 If this wasn't from The New York Times you would never believe it.

Some of the jurors who imposed the death penalty on Charles Rhines, who was convicted of murder, have said they thought the alternative — a life sentence served in a men’s prison — was something he would enjoy as a gay man.

During deliberations, the jury had often discussed the fact that Mr. Rhines was gay and there was “a lot of disgust” about it, one juror recalled in an interview, according to the court petition. Another said that jurors knew he was gay and “thought that he shouldn’t be able to spend his life with men in prison.” A third recounted hearing that if the jury did not sentence Mr. Rhines to death, “if he’s gay, we’d be sending him where he wants to go.”

But, fortunately, that's why the United States has a Supreme Court - to intervene in cases just like this. Nobody would sit by and see a guy put to death because he's gay, right?


The justices rejected Mr. Rhines’s plea to hear his bias claim, allowing his death sentence to stand despite disturbing evidence that it may have been the result of anti-L.G.B.T. animus. As usual, the court gave no explanation for its decision not to review the case. But its silence sent a deeply troubling message about the value placed on the lives of L.G.B.T. people.

Troubling? How about outrageous.
Posted by The Mound of Sound at 11:45 AM

Rhines, Citizens United, Trump v Hawaii, Janus... The SCOTUS is greasing the skids for fascism. Just like with Hitler, what Trump does will be legal.

Not that it matters much, but Kennedy announced his retirement today. I can't wait to see the wingnut they find to replace him.


That's what I was thinking when I heard Kennedy was packing it in.

The court's treatment of the Rhines case reveals the dark side to today's USSC.

So did Mitch McConnell's blatantly unconstitutional refusal to hold hearings on confirming Garland.

and how again did Yurtle the Turtle get his job?

Should be fun when Scheer's the next PM and can get his TrumpOn.

Yurtle the Turtle was a neocon Master of the Universe. Trump ain't building that monstrosity up any longer: he's taking it down.

(There are only two directions: building up a stack of turtles, or taking it down. The free-trading globalist turtle-stack people are awful livid over "Mean Mr. Trump". It can't be because he's building it even higher!)