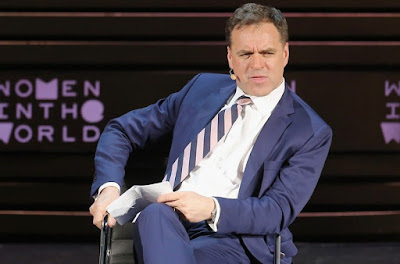 Scotland's hard-right historian and annoyingly pompous loudmouth, Niall Ferguson, has stepped in it this time and it's all due to someone leaking his email messages.

Niall Ferguson, the conservative British historian and political commentator, has resigned from a key position on a US university free speech programme after leaked emails revealed that he urged a group of Republican students to conduct “opposition research” on a leftwing student.

Ferguson had been serving in a senior leadership role on the Cardinal Conversations, a Stanford University programme that has given a platform to contentious speakers including Charles Murray, the controversial social scientist who has claimed that black and Latino genetics are linked to intellectual inferiority.

The leaked emails, which first appeared in the Stanford Daily newspaper, revealed that, following a backlash against Murray’s appearance, the Sunday Times columnist urged conservative students to conduct “some opposition research on Mr O” – a reference to a leftwing activist student at Stanford, Michael Ocon.

...In one email sent to various conservative students, including John Rice-Cameron, the president of Stanford College Republicans and the son of Susan Rice, a former national security adviser to Barack Obama, Ferguson confides: “Now we turn to the more subtle game of grinding them down on the committee. The price of liberty is eternal vigilance.

“Unite against the [social justice warriors],” he instructed students in another email, urging them “to bury whatever past differences they may have for the common good”.

Rice-Cameron replies: “Slowly, we will continue to crush the left’s will to resist, as they will crack under pressure.”

Ferguson says he regrets the publication of his emails and he even regrets writing them. What he really regrets is that the arrogant prick got exposed for everything that is Niall Ferguson.
Posted by The Mound of Sound at 4:09 PM

Current genetic research indicates that the concept of race is a valid one. Sorry, bleeding hearts. Also note, intelligence is highly heritable.

[Reich] is adamant that it is a very real one and takes issue with those geneticists who argue that there are no substantial differences in traits between populations.
“This is a strategy that we scientists can no longer afford and that in fact is positively harmful,” he argues. Plenty of traits show differences between populations: skin colour, susceptibility to disease, the ability to breath at high altitudes and the ability to digest starch. More to the point, uncovering these differences is only just beginning. Many more will be discovered over the decades, Reich believes. Crucially, we need to be able to debate the implications of their presence at varying levels in different populations. That is not happening at present and that has dangerous implications. “If as scientists we wilfully abstain from laying out a rational framework for discussing human differences, we will leave a vacuum that will be filled by pseudoscience, an outcome that is far worse than anything we could achieve by talking openly.”


Ooh, ooh. You are a racist swine, aren't you? My dad's generation went way overseas and shot a lot of people who thought just like you think and we thought, back then, that was a really good thing.We still do.

Argue with scientific facts... if you are able to comprehend them.
You know, it is Harvard.
No amount of invective will change reality. Truth cannot be racist.

Any links between intelligence and race are wrong because the Anglo Deep State has kept People of Color across the globe under the boot of oppression for the past 5 centuries.

As well as Big City Liberals relegating POC to inner-city ghettos (while screaming "RACIST!" at their political enemies.)

Let's bring civilization to the world and then see what the people can bring to the universe.

But you can't boil race down to a single quantity because racial diversity spans many parameters/dimensions. It's a system too complex to put in an all-defining central tendency, let alone claim that some measure of central tendency is superior.

(This is also why IQ is a dumb measure of intelligence.)

Of course, not all humans are patriarchs. Egalitarians were here long before the patriarchs came on the scene 50 kYA (using human sacrifice and cannibalism to prevent the people from reverting back to their egalitarian ways.)

Long story short: it's good to have different races on the planet. Each race brings something others don't have. No need to wipe any race off the planet. No need to create the Borg by actively melding all the races into one Frankenrace. Live and let live!

"We are the Borg. Existence, as you know it, is over. We will add your biological and technological distinctiveness to our own. Resistance is futile."

Lot's of folks and apparently Mound too, confuses the issue of existence of different races with racism, i.e. if we are going to apply a discrimination based on these pre-existing differences. Having equal individual rights does not make us equal in other dimensions.
Zealots retorting to insults (in lieu of better arguments) also forget that while describing the populations we often resort to using the term "average." For example, the fact that Obama senior attended the Harvard (and had better scores that the infamous war criminal Bush who studied there too) has nothing to do with average academic aptitudes of blacks vs. whites.

These days it don't take much to get shouted down by sanctimonious, hippy, cultural-Marxists who think they're better than everyone else (but are keeping their reasoning a secret.) Because they never accomplished anything the entire lives. Just liquidated the civilization their parents brought.

I think the CIA invented the hippies. Then JFK brought the program. (Really not cool they offed him afterwards. Ha-ha just kidding!) It was really a distraction. Social identity politicking nonsense in place of economic development. "Ask not what you're country can do for you but what you can do for upper-crust moochers like me." JFK killed FDR's New Deal that created the 'Wealth of the First World Nations.'

I prefer good ol' fashion constitutional democracy to whatever cult of crazy the Deep State is cooking up in its establishment university laboratories. They are economical. They don't only dis-indoctrinate the SJWs to go out into the world as the worst enemy to their cause, they get them on the hook for loads of student debt. And the people look at their ugly yammering sour pusses and probably think: they deserve it.

Of course, they're just sheep being led to the slaughter. (Deep State wolves gotta eat.) They kinda mean well in their idealistic youths before becoming neoliberals.

So yeah I believe in freedom of religion, freedom of believe system, freedom of speech, freedom of thought, freedom of political beliefs. Cultural Marxists from Akhenaten to Constantine to Victoria to Stalin to Hitler to ISIS to these contemporary birdbrain matriarchs, believe they have the truth and therefore they are doing the world a favor ramming it down everyone's throats.

They bring destruction of civilization wherever they go. They are trying to weasel their way into power now. I'm glad Donald J. Trump won the election on the basis this is a major problem and how he exposed the crazies and all the corruption in the process.

But yeah: PC science is an oxymoron. It's a much greater danger to science than Christian fundies teaching the kiddies foolishness like 'intelligent design.' Everyone overcomes foolishness. But when you have priests calling themselves scientists, they control the knowledge.