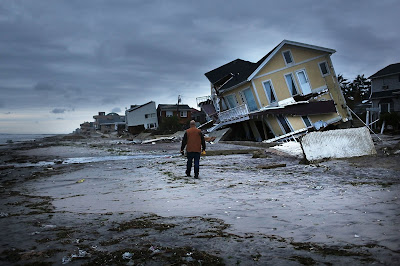 It seems that Category 5 may no longer cut it.

The analysis, published this week by four prominent climate scientists, also shows other clear trends, including a poleward migration of the areas where storms reach peak intensity, which puts new areas at risk, including New England and even Europe.

Storms are also intensifying more quickly, with a greater chance they will drop record amounts of rain, especially if they stall out when they hit land, as Hurricane Harvey did in Houston last year.

"The weight of the evidence suggests that the 30-year-old prediction of more intense and wetter tropical cyclones is coming to pass. This is a risk that we can no longer afford to ignore," wrote the authors—Stefan Rahmstorf of the Potsdam Institute for Climate Impact Research, Kerry Emanuel of MIT, Jim Kossin of NOAA and Mann.

..."The current intensity scale doesn't capture the fact that a 10 mph increase in sustained wind speeds ups the damage potential by 20 percent," Mann said. "That's not a subtle effect. It's one that we can see." Based on the spacing of Categories 1-5, there should be a Category 6 approaching peak winds of 190 mph, he said.

Creating a new warning level for unprecedented storms could help save lives. When Typhoon Haiyan, one of the strongest tropical cyclones on record, hit the Philippines in 2013, people died in shelters that had been designed to withstand a historic storm surge but still flooded.

...The question is how to prepare, and in many parts of the U.S., existing disaster recovery programs are resulting in infrastructure being rebuilt in harm's way, without consideration of how global warming will intensify impacts, said Jessica Grannis, adaptation program manager with the Georgetown Climate Center in Washington, D.C.

"There are bad recovery decisions being made," Grannis said, using the impacts of Hurricane Irene in Vermont as an example.

Flooding from the 2011 storm destroyed big sections of the state's road system by washing out old culverts designed for a climate that no longer exists. Recovery included plans for replacing the old drainage systems with new "bottomless" culverts that can handle much more water, but the Federal Emergency Management Agency "denied them the cost of those culverts," she said. "Disaster recovery programs push people into replacing old systems with the same thing."

... Kevin Trenberth, a climate scientist with the National Center for Atmospheric Research, said another big concern is the Trump administration removing flood safety standards "without any regard as to why they exist."

"The damages that occurred last year strongly suggest that small investments in resilience in the past 10 years could well have saved hundreds of billions of dollars and lots of strife," he said. "After Hurricane Katrina, the Corp of Engineers built back the levees to withstand a Category 3 hurricane, but not a Category 5 hurricane. That makes no sense to me, and in many areas the U.S. seems incapable of planning ahead for real risks.

Designing a scale of hurricanes with an upper limit always seemed rather dumb to me. It is as if the 'eye' storm on Jupiter wasn't there but astronomers insist it is. Category 6 is a good start. Mother Nature doesn't care one whit about our designations. When your house and car are under water you won't care either.

In North America insurance companies will do more than governments to wake people up to the realities of global climate change.


Then FEMA gets the job of providing flood insurance and Congress gets worried about offending Southern voters by charging them market rates for coverage. That's when they socialize loss and subsidize coverage premiums. Hypocritical? Absolutely.

It still is impacting house sales, however. You need a mortgage? You must have insurance and that comes with big premiums that take down prices.

.. couple of weeks ago I spoke with several Houston residents while enroute to or in Havana.. though they were not flooded themselves.. they said in the aftermath, the amounts of mouldy wet drywall 'garbage' and twisting lumber was astonishing.. not to mention ruined goods.. computers, toys, clothes, furniture.. everything. No surprise.. they both said it was like being pinned in the corner with smokin Joe Frazier .. it just kept coming and coming & pounding, no escape.. you thought it was over & it was just warming up.. Friends in Anguila say they did not think they would survive.. would be blown or sucked into the waters.. tied themselves n dog together, wearing life jackets, in the bathroom of a concrete block house way uphill from the beach.. in the bathroom for two days .. their previous frame rental on the shore was gone.. flights? What flights? I think there were still two hurricanes after