Learning to Let Go of the World as We Once We Knew It. The Age of Entropy. 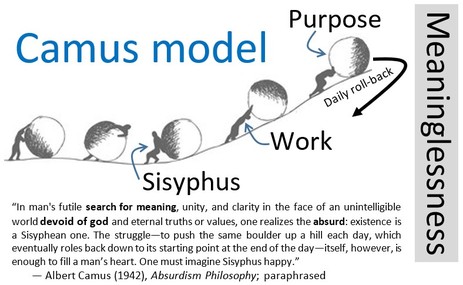 The older you get the harder it can be to let go. Most people - okay, everybody - I speak to winds up at some point in a conversation wondering what is going on today, how did the world we grew up to understand succumb to such change, even chaos? Why is liberal democracy on the ropes? How did people like Donald Trump or Doug Ford become political frontrunners? Dreary tidings, rarely pursued at any length. How did the world come to this?

The answer is that we have entered the Age of Entropy.

R.L. Schweller wrote of this in Foreign Affairs in June, 2014. It's as though he foresaw the rise of leaders like Trump and the chaos among nations.


It increasingly seems that the world will no longer have a single superpower, or group of superpowers, that brings order to international politics. Instead, it will have a variety of powers -- including nations, multinational corporations, ideological movements, global crime and terror groups, and human rights organizations -- jockeying with each other, mostly unsuccessfully, to achieve their goals. International politics is transforming from a system anchored in predictable, and relatively constant, principles to a system that is, if not inherently unknowable, far more erratic, unsettled, and devoid of behavioral regularities. In terms of geopolitics, we have moved from an age of order to an age of entropy.

Entropy is a scientific concept that measures disorder: the higher the entropy, the higher the disorder. And disorder is precisely what will characterize the future of international politics. In this leaderless world, threats are much more likely to be cold than hot; danger will come less frequently in the form of shooting wars among great powers than diffuse disagreements over geopolitical, monetary, trade, and environmental issues. Problems and crises will arise more frequently and, when they do, will be resolved less cooperatively.

...As many scholars have pointed out, the world has enjoyed the longest period of relative peace in recorded history. The absence of cataclysmic wars among great powers has obviously been a great boon. But it has also come at a real cost. For the past several centuries, wars between the extant power in the international system and the rising challenger or challengers have occurred every hundred years or so, crowning a new leading power, which is responsible for organizing international politics and shouldering the burdens of global leadership.

...In the absence [of great wars of succession], we no longer have a force of “creative destruction” capable of resetting the world. And just as seas become foul without the blowing of the winds, prolonged peace allows inertia and decay to set in.

Power is already more diffuse than it ever has been. And it is growing more so by the year. The United States remains an important power, but it knows that it no longer towers over all contenders. Plagued by ballooning debt, Washington has narrowed its foreign policy to a few basic objectives. Yet the deterioration of Pax Americana is not due solely to the United States' declining power. It is also a problem of will -- one rooted in fading national resolve to use those power advantages that the United States still enjoys.

Interactions between political actors are also characterized by greater entropy. The digital revolution has allowed information to spread farther than ever before, empowering average citizens, celebrities, corporations, terrorists, religious movements, and shadowy transnational criminal groups. The power these groups can exert, however, is unconventional. They have the power to disrupt, to stop things from happening, but they don’t have the power to enact their own agendas. Twitter, Facebook, and text messaging have allowed citizens to organize massive demonstrations and topple dictatorial governments. But there is little reason to believe that citizens organized via social media are able to institute political changes.


It's not just the Masters of the Universe. It's you too.


Individuals, too, are experiencing greater personal entropy, as they discover that they are incapable of handling the speed at which digital information is transmitted. Information rains down faster and thicker by the day. Increasingly, modern people may feel, as the psychologist and philosopher William James did in 1899, that an “irremediable flatness is coming over the world.” Flatness here refers to a general sense of banality and loss of meaning. Rather than a heightened sense of stimulation and awareness, information overload produces boredom and alienation. As the economist Herbert A. Simon has explained, a “wealth of information creates a poverty of attention.”

...Having greater quantities of information at our fingertips has not produced greater wisdom. Instead, it has led to information entropy. As the volume of information processed or diffused increases, the information becomes noise. In the digital age, information is routinely distorted, buried in noise, or otherwise impossible to interpret. The result is that people respond to the many contradictory “facts” and “informed opinions” being hurled at them by essentially selecting and interpreting facts in ways that accord with their own personal, idiosyncratic, and often flat-wrong ideas about the world. Knowledge no longer rests on objective information but, rather, on seductive “true enough” facts.

Hell, or the next best thing, on Earth.


The new world of rising structural and informational entropy means that history can no longer repeat itself.  ...Instead, we are on the cusp of an eternal purgatory. It will be a world full of confusion and instability. The age of entropy will be a time of restless disorder, an aimless but forceful hostility to the status quo -- a hostility that inspires the pervasive use of the dismissive prefixes anti- and post-(as in anti-Western, post-American, postmodern) and the promise to reinvent much or all of the present global order and its associated institutions. But the hope that getting rid of “what is” will by itself spawn something new and workable to take its place is just that, mere hope.


The age of entropy will not be a utopia, but it need not bring us to despair. Disorder does not suppress all that is good in the world. Without great wars, we have enjoyed prosperous and peaceful times. Nor is disorder itself something to fear or loathe. “The struggle itself,” as Albert Camus famously pointed out, “is enough to fill a man's heart. One must imagine Sisyphus happy." Like Sisyphus, we need to embrace the unknowable, to accept our unintelligible world and our futile struggle to come to terms with its incomprehensibility. For better or worse, we have no other choice.

"Without great wars, we have enjoyed prosperous and peaceful times."

Seriously? Ask the people of Iraq, Afghanistan, Syria, Yemen and Palestine how they feel about this incredibly myopic viewpoint. The only people living in "peaceful times" are those not under threat of being invaded, bombed and droned by an out-of-control American military machine that sees any expression of political independence by another nation as a mortal threat to be ruthlessly squashed. In America, you only live in "peaceful times" if you aren't a minority or a poor person under constant threat of being executed by trigger happy cops.

The only people who live in "prosperous times" are increasingly only a tiny fraction of global elite who are literally stealing it from the rest of humanity as they squeeze every last dollar of profit out of workers and the natural environment. Everyone else is being gradually impoverished if they are not desperately poor already.

This guy needs to pull his head out of his rear end, travel around his own country and see just how badly so may of his fellow citizens are doing in these supposedly peaceful and prosperous times. Heck, he's a professor at Ohio State so he wouldn't have to drive very far. Rather than being a visionary, he sounds like a cloistered ivory tower dunce--the type of out-of-touch elitist who utterly missed the rise of Trump because they refuse to acknowledge America's enormous growth in wealth inequality, and the huge role feckless liberals like him have had in making it happen.


Karl, brace yourself. Schweller is a Trump guy. I wrote another piece today asking the reader to imagine a world in which every leader was some variation of Donald Trump.

There's no good that can come of ignoring the decline of liberal democracy and the rise of authoritarianism, nationalism and populism in Turkey, Hungary, Poland, Austria, and yes, the United States but also in Germany, France, Britain and, to some extent, even here in Canada.

Those whose first duty was to defend and nurture liberal democracy went AWOL when they abrogated their responsibilities and powers to the corporate sector. Where is this more blatant than in America's "bought and paid for" Congress? The governments of the developed nation have given away the public's democratic birthright. They've turned on their own people and left them angry, fearful and easy pickings for the first charismatic who catches their eye. How else do you explain Trump?

Couldn't resist this little play on entropy that I read in a computer mag thirty years ago:

* General Theory of Entropy, as encapsulated by Dave Small:

Fails miserably at the chaos/order dichotomy, but gets a lot of contemporary politics.

Too much information is like a game of chronic perpetual dodge-ball
...things keep coming at you non-stop all the time---causing one to just "shut down" and "not want to deal with anything anymore".
Constant omnipresent of any subject or element creates indifference and apathy towards it.