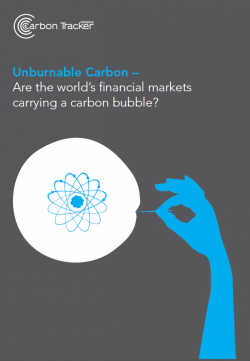 The J. Trudeau Memorial Pipeline could be transformed into a multi-million dollar blunder, swept away by a bursting carbon bubble.

The existence of a “carbon bubble” – assets in fossil fuels that are currently overvalued because, in the medium and long-term, the world will have to drastically reduce greenhouse gas emissions – has long been proposed by academics, activists and investors. The new study, published on Monday in the journal Nature Climate Change, shows that a sharp slump in the value of fossil fuels would cause this bubble to burst, and posits that such a slump is likely before 2035 based on current patterns of energy use.

Crucially, the findings suggest that a rapid decline in fossil fuel demand is no longer dependent on stronger policies and actions from governments around the world. Instead, the authors’ detailed simulations found the demand drop would take place even if major nations undertake no new climate policies, or reverse some previous commitments.

That is because advances in technologies for energy efficiency and renewable power, and the accompanying drop in their price, have made low-carbon energy much more economically and technically attractive.

Dr Jean-François Mercure, the lead author, from Radboud and Cambridge universities, told the Guardian: “This is happening already – we have observed the data and made projections from there. With more policies from governments, this would happen faster. But without strong [climate] policies, it is already happening. To some degree at least you can’t stop it. But if people stop putting funds now in fossil fuels, they may at least limit their losses.”

...Prof Jorge Viñuales, co-author, said: “Contrary to investor expectations, the stranding of fossil fuel assets may happen even without new climate policies. Individual nations cannot avoid the situation by ignoring the Paris agreement or burying their heads in coal and tar sands.”

However, Mercure also warned that the transition was happening too slowly to stave off the worst effects of climate change. Although the trajectory towards a low-carbon economy would continue, to keep within 2C above pre-industrial levels – the limit set under the Paris agreement – would require much stronger government action and new policies.

That could also help investors by pointing the way to deflation of the carbon bubble before they make new investments in fossil fuel assets.

So, let's unpack that. Before 2035 the bottom is going to fall out of the fossil fuel markets.  Even if Trudeau does get his pipeline up and running as soon as possible that leaves a window of under 15 years to recoup our government's, your, investment that could easily come in at 15 to 20 billion dollars.

Who does Trudeau think is going to buy this pipeline "investment" at this point?  Let's be blunt. How much will he have to pay them to take it? They weren't lining up to buy it directly from Kinder Morgan, the Texas outfit that got 4.5 billion out of Morneau for the half-billion dollar, 65 year old Trans Mountain pipeline. It seems if Trudeau or the government we'll elect next year to replace him does manage to sell it, Canada will take one hell of a haircut on the price.

The bubble is beginning to burst now and it's unstoppable.

"Individual nations cannot avoid the situation by ...burying their heads in ...tar sands." Oopsie, that certainly sounds like some nation I know, eh Justin.

Only this "death rattle" market transition is still happening "too slowly to stave off the worst effects of climate change." In other words, Trudeau and Notley have us heading straight for the iceberg, full speed ahead. We'll get screwed both on the pipeline and on climate change. 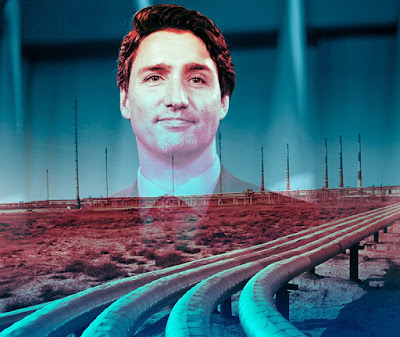 .. even my truly bright fiancee aghast.. but she sez this is a grab for some Trudeau cronies.. just down th road.. She questions how an 'asset' valued at 550 million gets 4.5 million $.. That's 4 million $ of taxpayer bonus money.. why? For what ? A 65 year old pipeline is appreciating? In my book its a leaky senior.. due to retire.. collect a pension.

Hell, we've all written extensively about Kinder Morgan of Texas - ex Enron - Trans Mountain for Washington State & subsidized up their ying yang for no good reason I can identify.. What ? For being leaky? This is crony level machination for sure.. and expect it to happen soonly.. and be announced as a victory or a holy event.. a major build of the nation.. and we should all do front summies with full twist & stick the landings in appreciation.. I predict it will happen 1 month before the next election.. and its already arranged, for 4.5 million $ - a 1st round draft choice and 2 board of directorships

Or maybe we will give it to the Russians.. I forget who Harper gave the Wheat Board and all its assets, properties, rail cars & track to.. maybe them.. I assume they're a charity.. and needy


I think we have a government that operates on cognitive dissonance, Sal.

The essence of neoliberal globalism is the surrender of fundamental aspects of national sovereignty to the corporate sector. The market knows best. Eventually industry begins steering government.

You can usually tell when politicians start babbling like the addled, spouting nonsense about how flogging the most carbon-intensive, filthiest ersatz petroleum will lead to a green future but never quite connecting the two.

Salamander, Aren't you missing a few zeroes? Don't you mean 4.5 BILLION with a B?
I know, its confusing. Chrispy Clark used to have the same problem. Zero is nothing, nada. So what are a few nothings? Nada?
And I'm NOT your truly bright fiancé!

Ihe writing is on the wall, Mound. Fossil fuels will become a quaint vestage of the past. But there will be a lot of carnage as they go down.


Yes, Owen, there will be "a lot of carnage" in the future. With proven fossil energy reserves subscribed on the global markets to the tune of $27 trillion, the loss of that notional wealth will be a massive body blow to the world economy. Unfortunately with leadership like Trump and Trudeau that ensures there'll be no chance of a soft or even survivable crash landing in North America.