And Now, a Few Timely Thoughts from Bob Rae 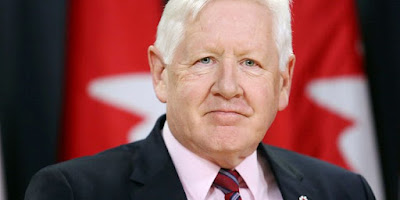 A fellow blogger* drew my attention to an important article by Bob Rae published in The Walrus, "When it Comes to Trump, Business as Usual is Impossible."

Here are a few excerpts from this timely essay:

After a lifetime in Canadian politics, I know first-hand the unique nature of our relationship with the US. It is not an easy one. Canadians often feel we know the US, and we see its problems and politics as if they were extensions of our own. We are beginning to understand that America is now a very different place. The insistence on “America First,” the vitriolic language against immigration, and the association of immigrants with crime are not messages we can support or even ignore. The use of the entirely bogus argument of “national security” to slap punishing tariffs on our steel and aluminum exports takes the US down a path of trade lawlessness and bullying that is unprecedented in the post–Second World War era.

If Canada’s well-being was not so tied up with its relationship with the US, it could stand back and enjoy the late-night comics. But that is not the case. We Canadians do not have the luxury of being either bemused spectators or freelance commentators. There is too much at stake. We are economically vulnerable because so many jobs are in industries—like lumber and auto manufacturing—that depend on reliable access to the American market. The integration of our two economies has intensified since the signing of the Canada-US Free Trade Agreement in the 1980s and its expansion into nafta in the following decade. If we are denied secure, long-term access to the American market, we stand to lose in two ways: immediate job losses would likely be followed by international investors turning away from Canada. nafta allowed Canada to develop a strategy of investment attraction that made a point of emphasizing its advantages as a base of activity in the broader North American market. The threats and uncertainty of the past year have cast a pall on those arguments. Trump’s countermessage is crystal clear—there is no assured base for access to the United States outside his borders.

...The toxic quality of his administration’s rhetoric and actions on immigration, race relations, human rights, and world events generally make it clear that we have an American government that sees itself as leader of a right-wing populist, nationalist movement, rather than the leader of a coalition of countries and governments that share common values. Trump’s recent attack on German chancellor Angela Merkel’s openness toward refugees, his full-throated support for Brexit, and his embrace of nativism wherever in the world he sees it—these are all reflective of a political strategy that is intended to disrupt. That this leadership is being exercised in an incompetent, erratic, and utterly mean-spirited way does not take away from its goal and impact. This is neither the America, nor the world, we want or need.

...We need to understand that President Trump means what he says and says what he means. He believes that trade is a zero-sum game and that the US has been outpriced and outsmarted not just by us but by everyone else too. He thinks trade wars are “easy to win.” He knows his base has a steady appetite for racism, protectionism, and populism, and he feeds those things to them. He likes and admires strong leaders, like Vladimir Putin, Recep Tayyip Erdoğan, Rodrigo Duterte, and Kim Jong-un and has recently shown more respect and affection for a North Korean dictator who starves his people and kills his opponents than for any of his Western allies. The only saving grace may be the profound incompetence of Trump’s administration. But bear in mind, Trump’s team could get better at actually achieving what it is it wants to do.

The most recent fiasco—the forcible separation from their families of thousands of migrant children seized on the US border with Mexico—is a case in point. This act of desperate inhumanity was met with a barrage of negative publicity unmatched by any other domestic act of the Trump administration (and it reached fever pitch the same week the US withdew from the UN Human Rights Council). The blowback will likely continue until families are reunited. But Trump will just as likely keep tweeting and upping the anti-immigration rhetoric, for the simple reason that he is in the fight of his life and has nowhere to go but to his base. He doubles down because he only has one pitch, aimed straight at the head of whoever gets in his way.

America's vaunted system of "checks and balances" has utterly failed, betrayed by a Congress in the control of cowardly Republicans lacking the courage to hold the executive branch at bay. America has endured "unitary" Republican governments before, almost all of which have ended in recession or worse. This time, however, is different in that the sadist-in-chief has utterly cowed his Congressional minions into dutiful, unquestioning obedience. What they used to brag was the "party of Lincoln" is no more. It is now the party of Trump and whatever clone succeeds him.

Not since 1814 have we had such menace at our border, our one and only border. We must now accept, no matter how reluctantly, that this America, Trump's America, is not our friend.

Yesterday Stephen Harper, sullenly returned from the dead, argued that we must placate Trump, bend to his will. That Quisling bastard is on his way to a private audience with Trump at the White House. Harper is wrong, dead wrong. If we throw ourselves at Trump's feet, he'll be back, demanding that we do it again on some other contrived grievance. Harper would sell us down that river.

It's a piss poor country whose people will not accept disruption and, yes, pain to defend what is theirs. Those who will not are little more than prey for the predator and perhaps even deserve to lose it all. Better, in my view, that we follow Bob Rae's prescription for this perilous moment.


Trudeau is right to rally Team Canada—the country’s business and labour leaders, provincial politicians, and a broad alliance of political and economic interests—in engaging our American partners beyond the Trump administration to help them understand their future is as much at stake as ours. Pinpoint the states, industries, and companies most affected by the tit-for-tat tariff skirmishes. Build alliances internationally in favour of multilateralism and the rule of law. Negotiations will happen, and concessions will be made, but we need to present an alternative view to the administration in private as well as in public. We need to define our ground and keep defending it as surely as we work whatever back channels still exist. This is not about anyone’s electoral future. It’s about the future of our country and our world.

And, as for that Quisling bastard, my greatest hope is that he finds some reason to stay down there.

America's vaunted system of "checks and balances" has utterly failed...

Canada's parliament didn't exactly cover itself in glory when Harper took the boots to its rules and norms. Fortunately, our judicial branch wouldn't put up with his crap or we'd have been in a lot more trouble.


Trailblazer, I wish I knew if Trump is simply an aberration or he's revealing the true face of an America we've tried to avoid noticing.


Who can forget, Cap, Harper's vow to so transform Canada that we wouldn't recognize it? The opposition during that decade was pathetic and, you're right, it was the courts - and Pierre Trudeau's Charter of Rights and Freedoms - that protected our democracy.

We should hire Finnish advisers about how to survive next to a toxic, savage hegemon.

You hit the nail on the head.

As long as the wallet was full we and our UK counterparts have willfully towed the American line.
I only hope that the world has learnt it lesson and that trade agreements and foreign policy will reflect it.

Rereading Gwynne Dyer's Climate Wars. (published 2008) He included several futuristic scenarios in which the US has turned in on itself and,surrounded by hostile neighbours, has built a wall along the Mexican border.


Anon, I've removed your screeds because - well, because they're screeds. You can't seem to comment without being obnoxious. My blog, my call.


NPoV - the Finns. Good idea only I think they're booked for the upcoming Trump/Putin summit.


Toby - I should probably add my copy to my "to read" stack(s) of books growing ever larger in my livingroom. I suppose you and I are both wondering about Dyer's claim that the Americans may move to militarize their southern border so that migrants face the prospect of being gunned down a'la the Korean DMZ

Mound, what had/has me wondering is Dyer's prediction that the time would come when Americans would demand that their government build the wall. After it is built, militarizing it is an easy step. Will they? I think it is just a matter of time. What we are witnessing now is pretty much blow back from a century of US intervention in Central and South America. Climate change, drug cartels and expanding populations are ramping up and the flow of refugees and migrants is going to grow exponentially.

Paralleling this is the US withdrawing inside of itself. The Donald is right in line with Dyer's prediction.