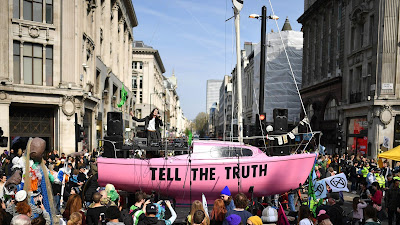 One of the most overlooked elements of the Extinction Rebellion is the demand for truth. They want government to tell the truth. Governments, ours very much included, tell a political truth that rarely rises above the level of obfuscation so common in Question Period answers. It's half-truths, outright lies, and relentless, non-stop distraction.

Justin Trudeau says his government "has done the science" on bitumen. The Royal Society of Canada and even his own Environment Canada say, no, the science hasn't been done. The message couldn't be more obvious - Trudeau lied as he's lied as far back as the 2015 election campaign. He's a liar. Yet his fan club still worship him as though he was our salvation.

Lies come in all sizes. Little white lies, that's part of life. We don't expect our politicians to be saints which is a good thing, in a way. However, when it turns to something genuinely existential, lies have a different significance. When you're in dire straits, lying about grave threats can be dangerous, sometimes nihilistic.  Greenwash acquires a profound menace.

Petro-states are notoriously dishonest and, if they're going to mislead the public on anything, it's climate change that tops their liars' list. If they told us what we're really facing, the difficult future ahead, what it would take to cushion our landing, what that would cost and our options to cover the bill, that might unleash no end of inconvenient questions. That might make it hard to justify some of their favourite policies and practices.

That's too many damned countries.
The USA, UK, Saudi Arabia,Canada,Russia, the list is long and the players are powerful.
Post Media have an agreement with CAPP to promote their products.
One must consider that media in other countries could have similar agreements.

So little time and so much to ignore, when all we want to do is extract next week's paycheque from whatever sources might cross our paths. The more noise the better. It helps make our claim that we don't know when we do.

.. shocking as it may seem ..
upon reading Tar Sands Magazine online - I came upon more truth / and facts regarding bitumin extraction, processing, export, expansion, pipelines.. than I can winnow out of OUR government. (I am truly contemplating - always adding OUR to any use or mention of Canada's Federal Government in my writing.. aka The Government Of Canada.. after all, its OUR's not theirs - whomever they may be or appear to be - I may do so with regard to OUR Provincial Government as it does not belong to Doug Ford.. but to us - the citizens)

Untruth.. lying by ommission, false promises, tall tales, jumbled rhetoric, talking points.. one could build a fine collection of ways to not or ever.. tell the damn truth. The reasoning behind deceit is obvious and vsried. Its often betrayed in courts of law.. where a judge may insist on presentation of facts - evidence - logic .. those things important to 'justice' and resolution..

Can someone explain how 'the oil patch' (such a cuddly friendly term) managed to get away with not telling The Alberta Government or Our Government of Canada, the damn TRUTH regarding current or lrevious emissions ? Without stretching the truth, is that not the same as lying to the population about the bacteria levels in their drinking water, the drinking water of the ENTIRE NATION .. and that the CONSEQUENCES of drinking OUR water will not be solveable within a generation.. or two.. or maybe never ?

We are talking about OUR EVIRONMENT .. its not theirs.. that aint complicated either.. political party and corporate FUCKERY is not acceptable.. and OUR Supreme Court.. indeed our Lower Courts.. need to ensure this is very very clear.. NOW !!!