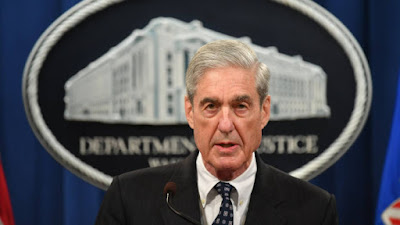 Briefly. Former special counsel, Robert Mueller, says it would be "unfair" to recommend criminal prosecution of a president who cannot be charged while in office. "Charging the president with a crime... was not an option." In other words, there's nothing in the report that takes Donald Trump off the hook. Barr and Trump are merely using the report as a smokescreen.

And then, "If we had confidence the president did not commit a crime, we would have said so."

Short and sweet. No questions taken. "There were multiple, systematic, efforts to interfere with our investigation."

On the obstruction issue, Mueller highlighted how the "Constitution requires a process other than" the criminal justice system to hold officeholders accountable, a clear signal that his obstruction investigation into Trump may be picked up by Congress. In other words, the remedy for obstruction of justice by an officeholder is impeachment.

"When a subject of an investigation obstructs that investigation or lies to investigators, it strikes at the core of the government's effort to find the truth and hold wrongdoers accountable."

Julian Assange got a well-deserved shout out. Mueller described an elaborate Russian effort to hack Hillary Clinton's and other Democratic campaign officials' emails that they then funneled to Wikileaks for distribution.  So much for the laughable notion that Assange is some honest journalist especially after his dump of Hillary emails less than two hours after the Access Hollywood story broke.

The road ahead seems pretty clear. The Republican Senate will not convict him. And Mitch McConnell has refused to take up any of the 100 bills the House has sent over to him.

There must be an impreachment inquiry that lays out the narrative of what happened. The voters must take down Trump and the Republican controlled Senate. Unless those two things happen in Novemeber, the republic is doomed.


I once might have considered your views hyperbolic, Owen. Not any more.

.. the grim reality is .. America has let seriously diseased political parasites take over their country.. to polarize and infect it. That's not hyperbole?. its reality. Mainstram Media seems unable to muster any real defense.. must less go on the offensive. At this point, the Democrats seem in shock at how vicious the onslaught is. Mitch McConnell appears to be on the take with Russian oligarchs. Insidious thugs like Sean Hannity and Stephen Miller are feeding Trump policy and cues.. it simply defies belief. Don't look for a rational response from US military either. They are anxious for a war or two or ten as always. My impression is that until 2020 Trump et al will bulldoze democracy, environment, finance, health.. and just plunge as all parasites do, further into the host, with no regard for the fact that they may kill it. In particular, I look at Mitch McConnell, who is surely etching his name in the history books as one of the great enablers and parasites. That a thug like Steven Miller can flourish is simply shocking. One is left wondering if a senior post is being readied for Epstein.. or will it just be a Presidential Pardon. It seems ridiculous that so many of them are wrapped into the Epstein sleazathon - Trump, Dershawitz, Acosta.. who else in that administration or its insane fringe ? This is a toxic era that is spawning the likes of Alex Jones, another friend and fan of Donald Trump. Perhaps the legal quagmires will swallow all of them eventually.. the entire Trump scions, Epstein etc.. but it could take a decade, half a generation to see convictions.. Give Trump et al six more years.. and the damage will be permanent.. and does anyone see a valid hero.. a Trump slayer headed into town ? Biden ? Warren ? The USA is actively seeking wars, even a world war.. but the enemy is actually inside the walls. It may not be a civil war.. it may be a social upheaval war.. The political and judicial environment is radioactive.. bathed in the fog of corruption, conspiracy, confusion and vested interest. What did America expect ? Electing the most diseased parasite of all.. as President ? That something 'great' might happen ? That such a travesty could come to pass points to just how rotted and deluded America really is.. and aint it great in Canada eh.. to see one of our federal political parties embrace Trump wholeheartedly.. as do many of our provincial political parties.. it all makes me want to barf.. its all no longer 'partisan' - no its just pure poison..

I’ve spent a lot of time around a type of people who admire and would support a Trump. It’s the default state of the obsequious. And they are legion. I see what’s happening as a stage in the triumph of scabbery, the near inevitability of which my dad predicted, he having begun his slog in the middle of the thirties. Sometimes I think it was the collective disgust for the bag-licker that characterized both dad’s and his dad’s generations, the vets of the world wars, that gave us, from contending daily with the cringing and parasitism of the servile, a temporary respite that is coming to its end. Dad knew it wasn’t destined to be permanent.

My excuse for being off-topic is that salamander’s comment led me there.

.. my excuse for being bang on topic is that John B's incisive comment led me there. He just summed it all up far better.. while portraying valuable family & historical context. Truly - Times Have Changed.. and/or 'Are a Changin'.. (Bob Dylan)

In my view - Mueller & his troop fulfilled the mission with honor, honesty and distinguished valour - sacrifice even, for two wicked years under constant bombardment. Unfortunately it was received by cowardly & ethically empty diseased thugs, parasites & traitorous political grifters plus publically misused & distorted by dazed and distorted partisan MainstunnedMedia primarily. But as a famous berra once said 'it aint over till its over' - or a stranger once said at the bar 'sometimes you eat the bear - and sometimes the bear eats you!' (The Big Lebowski) In this case, the bear will eat Trump et al, the GOP.. and quite possibly scatter some marrow bones. Its a radiant roadmap, the Mueller Report - leading to the carcass that is Trump & GOP. Now the jackals & buzzards can feed. Mueller et al put all the shit in one bag, threw it over The White House fence and walked away with a smile.. They dropped a similar bag on Congress.. and without a doubt all participants buried an archival copy in hundreds of backyards, clouds, data DVD's, printouts..

Even Steve Bannon now admits.. when Trump Inc's meagre and criminal financials are revealed.. he's toast. But then he's toast anyway.. He just let vanity and narcissism and greed drag him into an entirely different universe of complete and utter disgrace. The ugly American loser and liar - surrounded by simply disgraceful thugs, family & surrogates etc. Hell he blew Nixon out the window as a scoundrel. Nixon was an actual 'statesman' by comparison. But this is the era of scumbags and 'bag lickers' as John B and his father before him recognized. And as I attempt to point out.. here in Canada we have pathetic political parasites and their parties dying to import and emulate the travesty of Trump & the GOP. its going to require massive upheaval to free our systems, processes, elections of such diseased parasites. Its going to hurt.. it won't be pretty. Just look at what Trump & Pence represent.. a symbiotic partnership of greed, deceit and arrogant christian evangelicism working in harmony. Look at Canada now for similar patterning.. whoops.. there goes Andrew Scheer and Jason Kenney, Doug (for The People) or the late Rob Ford (crack addict) Christy Clark & Rich Coleman - Alison Redford, Ezra Levant, Nigel Wright, Tony Clement, Peter Kent, Ray Novak - all disgusting faux evangel christian creatures and all round us, wallowing in the political public trough