Sure, Jagmeet, But How? 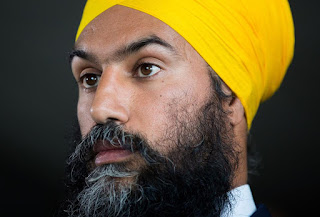 When a New Democrat talks about climate change they need to be very specific and entirely candid. We've heard their talk before and it's usually just empty words.

Jagmeet Singh, perhaps desperate enough to go for the low-hanging fruit, says an NDP federal government would cut Canada's greenhouse gases by half over the next decade.

Two points. There's about a zero chance of the NDP winning power in October. Second, to make that claim the New Dems would have to present a credible plan on how they would implement those cuts.

I expect something entirely sophomoric, bordering on utterly insincere, from Jagmeet's proposal. There'll be nonsense about getting rid of gas guzzlers and everybody suddenly zipping about in electric chariots.

As described in my previous post such drastic cuts will require a wholesale rejigging of our economy. The UN which is promoting global emissions cuts doesn't pull any punches on that score.

Jagmeet, like Justin, has reason to worry about climate change. It's an issue that threatens to bleed away NDP and Liberal support to the Greens. And so, out of the blue, Singh becomes an environmental chameleon. This is blatant posturing and Singh isn't very good at it.

We've seen enough greenwash from the NDP to know it's probably a ploy.
Posted by The Mound of Sound at 12:13 PM

Th recent Green victories have certainly put the fear of God into the NDP, Mound. Why go with an imitation brand, when you can have the real thing? For my money, the Greens have been consistent, and they will get my vote in October.


Losing Nanaimo-Ladysmith shook them up, Lorne. I think they lost their way once Layton took them to the political center, abandoning the left.

I gave up on the NDP when they went for political correctness.
We ,in Nanaimo, have had some very good female candidates who stood on their own against a male dominated 'profession'.
Making female participation mandatory led to the election of Sheila Malcolmson who is, in my opinion not very effective as a representative of the people but a good representative of the party!

When will we have the representation we need in that they will challenge the status quo?

Got to love this..

This is somewhat to the side of the main issue here, but I keep hearing about Layton taking the party to the centre and yet I never hear about anything in specific that he ever campaigned on that was more centrist than his immediate predecessors. If anything, Layton brought the NDP modestly back towards the left (and pushed it considerably towards the green) compared to where it was when he took the leadership. Not as far to the left as I or the New Politics Initiative people would have wanted, but really, it wasn't him who took the NDP to the centre.
Rather, it was the previous couple of leaders, particularly Alexa Mcdonough, as well as figures like Bob "quisling" Rae, who moved the party to the centre and emulated Tony Fucking Blair's "Third Way" (which was never any such thing). And after Jack was dead, Tom Mulcair also moved the NDP rightwards, which is not surprising since he was after all originally a Liberal. Not a bad man, but he never really "got" the politics of class.

Layton was actually the first to propose what's now being called the Green New Deal. He wanted to revitalize Ontario industry by repurposing it to producing green technologies, and he wanted to finance mass retrofits of buildings across the country. A clever feature was that as designed it would actually be a cheap program to run. People would pay for their retrofits via a low-interest loan from the government which would be paid for by their energy savings--until it was paid off, after which they'd simply be saving money. But unlike some programs we've seen, it wouldn't be passively waiting for people to take advantage of it; the idea was to send inspectors around to all the homes, do the assessment, and offer the deal--sign here and we do the retrofit and you end up with savings. It was actually a much more concrete proposal than I saw recently looking through the Green party platform you linked to.
He also, famously at the time, was the first NDPer in ages to publicly on TV claim to be a socialist; much like Sanders later if more modestly, this defanged the term considerably--there was no point in accusing him if he refused to be all defensive about it. And by proposing a fairly strong social democratic project for Canada as a whole, he hammered some key nails into the coffin of Quebec separatism. Of course he died and it never happened, but because of him Quebecois saw Canada as a place with a positive vision just long enough for the Bloc Quebecois to crumble.

As far as I can tell, the story goes that Jack Layton brought the NDP towards the centre because (1) The NDP is further to the centre than it used to be, and (2) Jack Layton is the only NDP figure they can remember, therefore (3) it must have been him, since there apparently wasn't ever anyone else in the NDP.

I briefly joined the NDP during their recent "leadership contest".
I watched Jagmeet flip flop on TMX at the starting line.
Guy Caron emerged as my pick. Jagmeet never impressed me.
The unweighted vote system literally gave the win to Jagmeet based on his hometown support.
Now the fracking flip-flop that follows the Notley ff ice-capades.

Today's Tyee has a sobering take on the Greens first-nations policy. As a fledgling party, they lack a lot of policy (or hold typical green-washing-neo-capitalist positions). But I like Lizzie May and the Rhino party disappeared.