The Myth of Clean LNG 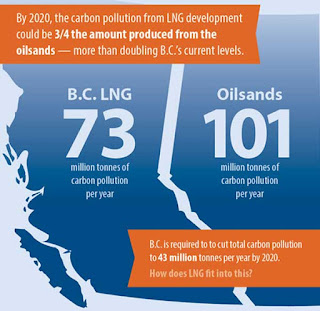 Liquid natural gas is regularly pitched as a "transition fuel" to help wean us off oil and gas as our economy moves to alternative clean energy.


This myth has been espoused loudly by proponents of LNG, including corporate directors and the BC NDP. And it is just that – a myth.

...LNG Canada will be the largest single point of greenhouse gas emissions in B.C. It’s also sourced via hydraulic fracturing (fracking). Fracking causes earthquakes, leaks significant amounts of fugitive methane emissions, and contaminates water tables. The government’s own scientists have stated that we do not know the extent of the environmental implications, much less those for human health.

Fracking is the primary suspect in a spike of extremely rare and lethal cancers in the very communities LNG claims to be benefiting. Doctors are actively advising pregnant women to leave these towns during their pregnancies.

...Let’s also take a look at the business case of LNG Canada’s “$40 billion dollar” investment: LNG Canada itself estimates $25 billion to $40 billion for a two-phase project (only Phase 1 has been approved). Between $7 billion and $11 billion of this amount will be spent on foreign soil. And, the NDP government has given LNG Canada over $5.35 billion in tax breaks (they’ve also created a system where LNG Canada is able to avoid paying the complete carbon tax). Not to mention that the cost of worsening climate change for B.C. could be dragged into the trillions.

The 10,000 jobs that LNG Canada purports to be creating? I asked the minister of finance if there is a guarantee that these jobs will be in B.C. Her answer? No. There has also been reporting on leaked internal documents, which estimated that only 35% to 55% of the construction workforce will be British Columbians.

...Nowhere in this debate are the environmental and health impacts, let alone the true economic costs, being given the emphasis they deserve. Canada is warming at twice the global rate. Over a million species are facing imminent extinction. We are in a planetary crisis that requires immediate action. We don’t have time for a 60-year so-called “transition phase.”

LNG might represent a path towards profits for a small group of corporations, but for British Columbians, the harm far outweighs the benefits. Millions of youth have been striking around the world this year – and it’s not because they simply fail to grasp something that a few adults “understand.” It’s because we are gambling with their futures.

That's an hard one to sell. If you have a coal furnace you can see and smell the smoke coming out of the chimney. With oil, you can smell the exhaust. With natural gas there's nothing to see and little, if anything, to smell. It looks to be clean. We have to depend on the flaring to notice that something is amiss. Of course, there is the science and you know how well science sells. Ask any anti-vaxer.


The greatest problem with natural gas is leakage. There was a study that detected gas leaks in Boston, Mass., from old lines, some of them going back a century. A survey of an area of Boston found 3,300 gas leaks. Then they moved on to Washington where they found 5,900 leaks. Atop that is the gas lost during fracking, extraction and transmission. Given that methane is 20 times more powerful as a greenhouse gas than CO2 this is problematic. When you factor in the leakage results, natural gas is more polluting than burning coal.

If there were viable natural gas deposits in BC, why would we export it as LNG, instead of using it ourselves in BC as a transport fuel etc?

That's if we were to ignore the problems with fracking, GHG emissions.

The companies planning to make the major investments are looking to offshore markets, Hugh.

BC's LNG may be a worse polluter than bitumen.
It requires massive amounts of sand and chemicals being trucked into the middle of nowhere. Some of that is recovered and trucked out again. (wonder how the wilderness looks after all that?)
Then it needs to be pipelined to the coast, frozen to a liquid (using 20% of its volume or equivalent amount of energy from ... Site C), shipped across the ocean then transported and processed again closer to sale.

But don't think twice, it's alright.

Yes but....why import Saudi and/or Venezuelan oil, incurring all sorts of transportation costs, as well as enriching some foreign economy, all the while wasting our own energy (compressing, transporting, leaking)and enriching some major corporations? As Hugh asks, why not endeavor to become self sufficient?

Re,
The companies planning to make the major investments are looking to offshore markets, Hugh.

WHich is exactly what the tobacco industry did when faced with opposition to their unhealthy products.

7:22...how do you know companies there are owned by the country? I would bet they are owned by some of the already billionaires from anywhere in the world.