The South Will Rise Again - It Already Has. 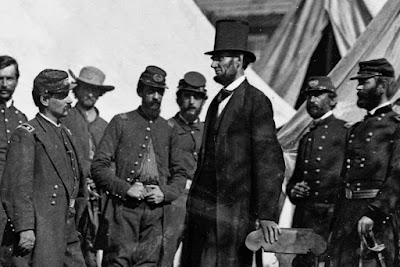 “If destruction be our lot, we must ourselves be its author and finisher. As a nation of freemen, we must live through all time, or die by suicide.”


Abraham Lincoln warned that, if America fell, it would succumb to perils from within. Lincoln forewarned his people of the rise of a man just like Donald Trump who would bring ruin to the United States.

On Friday, Donald Trump praised Robert E Lee. Slaveholder. Sadist. Traitor. Loser. It was his way of offering another “attaboy” to the neo-Nazis that marched in Charlottesville, Virginia, even after they killed Heather Heyer, beat an African American man, and chanted“Jews will not replace us.”

Trump’s statement was a clear nod to his base. That would be the same base that sent pipe bombs to the Clintons, Obamas, congressional Democrats and CNN. The same base that gunned down African Americans at a grocery store in Kentucky after failing to gain entrance to a black church. The same base that killed Jews while in Pittsburgh and then followed up with another slaughter in Poway, California. The same base that burned down three black churches in Louisiana and the storied civil rights center, the Highlander Folk School. The same base that had a hitlist of Democrats, including Representative Maxine Waters, and an arsenal of weapons to do the job. The same base that pretends to be border patrol as it kidnaps and cages human beings and defies law enforcement to do anything about it. The same base that invaded a bookstore in a tony section of Washington DC to intimidate an author who was laying out the pathology that places whiteness above everything else, even living.

America is in the middle of an insurrection. Led this time by another rogue government, only this one is not ensconced in Montgomery or Richmond. The architects of rebellion are in the White House. While they have ignited the base by conjuring up a vision of whiteness imperiled by “illegals” crashing the US/Mexico border, “black identityextremists” gunning for the police, and terrorists who, apparently, can only be Muslim, they haven’t stopped there.
In a multi-front attack, Trump’s regime has laid siege to the very pillars of America – elections, the rule of law, “We the People” and the constitutional bedrock that Congress and the judiciary are co-equals with the executive branch.

It is time to fight back.


So, while Trump idolizes Robert E Lee, Democrats have a fateful decision to make. They, too, can look to the civil war and choose which leader exemplifies how they’re going to deal with this threat to American democracy.

On one hand, there’s Union Gen George B McClellan, who, despite the enormous resources entrusted to him to protect and save the United States, was afraid to engage Lee and the Confederacy. He chose, instead, to just keep drilling his troops in Washington DC, waiting for some mythical, optimal time when it would be best to confront the forces determined to destroy the United States.

Or, on the other hand, they can model themselves on Gen William Tecumseh Sherman, who recognized that it was time to take the gloves off, fight with everything within reach to defend the United States of America, and make it clear to those who set out to destroy this nation, you can’t win.

This is not a uniquely American problem. The seeds of it are already sown in our own country. We know them as Scheer and Kenney, Moe and Pallister and Ford and the lunatics and far right extremists who are their foundation. How will we respond? Who will be our William Tecumseh Sherman? It certainly won't be our milquetoast Dauphin. We should start looking for someone of his father's stature.

your guess is every bit as good as mine, Willy. at the moment it seems a blank slate.