Think of It as "The Smell of Prosperity in the Air." 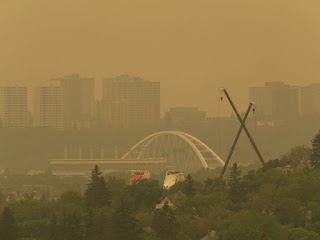 The Edmonton Journal reports that wildfire smoke is blanketing the city.  The headline reads, "The Apocalypse is Back." Apparently Calgary is getting the same thing.

These Alberta cities need a PR makeover. Why not just call all that lung-rotting smoke 'The Smell of Prosperity.'  Surely it's a small price to be paid for Alberta's Petro-Pogrom, a.k.a. bitumen.  Besides it should be over well before Christmas - with any luck.

American air bases often have billboards outside that read, "Forgive the noise, it's the Sound of Freedom." That seems to work.

There's no better time to get Albertans to see this wildfire threat in a better light. After all, it's only going to get worse as climate change worsens. Worse as in a lot worse.
Posted by The Mound of Sound at 11:30 AM

It is like being in China at the moment...taste, smell, and causing some people shortness of breath. Anyong

Will Jason Kenny blame BC for this? Or Trudeau?