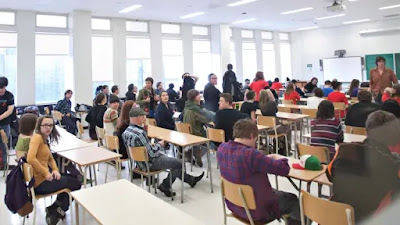 Have our atrophied old school political parties misjudged the issue of climate change? I think so. The worst part is that they haven't merely shot themselves in the foot. They were pointing that gun considerably higher.

This isn't about Paul Manly and the Green's by-election win yesterday in Nanaimo-Ladysmith. It's about much more than that, a generational thing that may cost the old school parties dearly in years to come. It's about students. Quebec students. It's about climate change. And, sure, it's about generational justice.


A Quebec high school French exam question that asked students about adapting to climate change has drawn a torrent of online criticism, as teens used memes and videos to denounce what they see as government inaction on climate issues.

The question on last week’s ministry exam for Grade 11 students asked: “Can we adapt to climate change?”

It quickly drew the ire of students like 17-year-old Francis Claude, who feels the way the question was phrased suggests the government has accepted climate change.

“It’s like they want to abandon the fight against climate change, and just make do and adapt,” said Claude, whose Facebook group dedicated to the exam has exploded to almost 37,000 members in recent days.

Claude said the members of his generation are committed to fighting environmental destruction, not adapting to it.

What's expedient to the old-before-their-time pols like Justin and Chuckles is seen much differently by our young people. It's their future being compromised by a gaggle of political hacks. It's the whole Greta Thunberg thing.

Trudeau is selling out their generation. They're not addled, unlike Liberal supporters who think a carbon tax at this horrible moment is meaningful, some great green step forward. These young people, they're clued in. They pay attention because, in many ways, we're deciding their fate twenty, thirty, forty years down the road and we're making those calls based on our interests, not theirs.

Trudeau is bad. Scheer will, if he gets the chance, be far worse. Scheer will do the nihilistic bidding of his posse - Kenney, Moe, Pallister and Ford and all the boys in Big Oil's boardrooms.

But "lousy" versus "even worse" isn't much of a choice, is it. And if those people are relieving themselves on your future maybe you just want rid of the lot.

We get the same warnings the kids get. We see the same stories in the papers, on TV. Only they don't mean as much to us, the "not just yet" generations. To the kids those reports and all those studies have a decidedly dystopian tinge while it's all "don't worry, be happy" from their elders, the Higher Purpose Persons like Justin and Andy and even Jagmeet.

Why shouldn't they get pissed off? Their needs, the real life and death stuff, isn't reflected in our decisions. Trudeau's pipeline is a repudiation of their lives twenty, thirty, forty years from now when we'll be enjoying a restful dirt nap as they curse our memory.

This is possibly, even probably, the decisive election year. After this year the door will close on a lot of opportunities to implement urgent initiatives. How many of these rubbish parties will present credible plans to slash Canada's greenhouse gas emissions by half by 2030 and then to decarbonize our society and our economy by 2050? After the phenomenal disappointment of Justin Trudeau how are young people to trust them?

They're going to have to sacrifice. We're already seeing to that. But it's compromising their future that we support, not sacrificing today to give them a fair shake, a less degraded future, that we'll endorse.


“What’s the point of studying for a future we’re not going to have?” said Claude, who attends Mont-Ste-Anne School in Beaupre, 40 kilometres northeast of Quebec City.

Claude said he started the Facebook group so students could exchange study tips and share jokes and memes about the exam process. But it has now morphed into a sort of environmental forum, where students direct their anger at the government and its perceived inaction.

Good luck to those kids. They'll need it. We'll see they need every scrap of luck they can muster.
Posted by The Mound of Sound at 8:36 AM

Totally agree. If the Conservatives win the next federal election we can kiss goodbye Canada's participation in fighting climate change. As you allude to in this piece, we need much younger politicians, who have some skin in the game, to step up. Most of the current politicians don't care because they will be dead before things get really bad, or they will be rich enough to pay to remove their pain from climate change.


Well we have a prime minister who's supposedly young enough who has come to resemble nothing so much as an old time ward healer.

I favour lowering the voting age to 16 so that young people at least have the chance to flex their muscles in how we're governed. The Tories and the Liberals wouldn't hear of it, of course, because they have good reason to fear a significant youth vote would blow up in their faces.

Why aren't we demanding something be done about "Free Capitalism" It is what has caused this pile-up. Jason Kenney the man of the hour, he knows what to do alright.