Researchers hope they'll be able to give Victoria and Vancouver a 30- to 50-second warning in advance of the megaquake when it occurs off Vancouver Island.

That doesn't sound like much but it might be enough to shut down gas lines and activate emergency systems that will be needed to cope with the quake and aftershocks.

The Neptune monitoring network deployed off the western coast of Vancouver Island comprises a number of seabed nodules or monitoring stations. 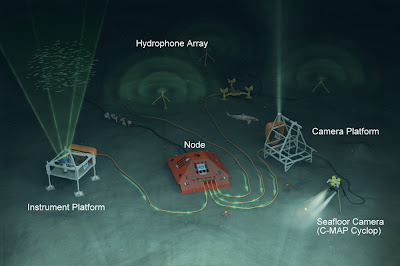 It's hoped these sensitive instrument clusters will detect and report the primary wave of the mega-thrust earthquake, essentially outracing the seismic wave to afford some usable warning.

The type of quake that hit Japan is similar to the one that could occur off the coast of Vancouver Island, said Kate Moran, president of the University of Victoria’s Ocean Networks Canada.

“It is well known that we will have one of those earthquakes some time in the future, and the answer could be sooner than later.”
Moran said the same things that researchers found in Japan and Chile could also happen here, with a megaquake transmitting stress to fault systems hundreds of kilometres away beneath Victoria or Vancouver.


She said one of the advantages in B.C. is that the NEPTUNE fibre-optic cable observatory network has sensors placed near where mega-thrust earthquakes occur in the ocean.
Moran said a team of government and university researchers is working on a five-year project to modify the sensors to detect the first wave of energy seconds before shaking begins.


“We want to detect that primary wave, and we’ll be able to then send a 30- to 50-second warning to major centres like Victoria and Vancouver,” she said. “And with that information, we’ll be able to shut down elevators and potentially shut off gas lines — things that could save lives and save money.”

Today's Times Colonist editorial says we have to move past our antiquated thinking on earthquake response.


Vancouver Island must pay close attention to a new study that suggests some of our assumptions about quakes are dangerously wrong.

All our attention has been focused on surviving the initial shock of a quake, but the aftershocks can last for years and affect cities hundreds of kilometres away, U.S. and Japanese seismologists say in the journal Science.
The report means we might have to rethink our disaster planning. Buildings are being designed and upgraded to withstand heavy quakes, but our infrastructure doesn’t take into account repeated aftershocks.

Planning for earthquake recovery has long assumed that a major quake reduces the risk of more earthquakes because it relieves stress building up between the tectonic plates. The new research suggests that’s not true.

By the way, if you've wondered what the deep Pacific seabed looks like, Neptune Canada offers a variety of live video feeds.  The cameras are dark most of the day to avoid interference with the habitat but the lights come on at scheduled times each day that are listed on the site.  The reef cam revealing British Columbia's incredibly rich, cold Pacific waters and ecosystem is usually on during daylight hours.
Posted by The Mound of Sound at 10:06 AM