Speaking of Crazies Bursting Into Flames

You may have caught the video of a U.S. embassy staffer in Malta going ballistic at a Maltese motorist with a tirade of threats and profanity.  Apparently whatever got to him is spreading quickly south of the border.

Consider this guy,  Ayo Kimathi, an employee of the U.S. Department of Homeland Security.   Off-duty, Kimathi does his bit for American security by hosting an anti-gay, anti-white, race war web site. 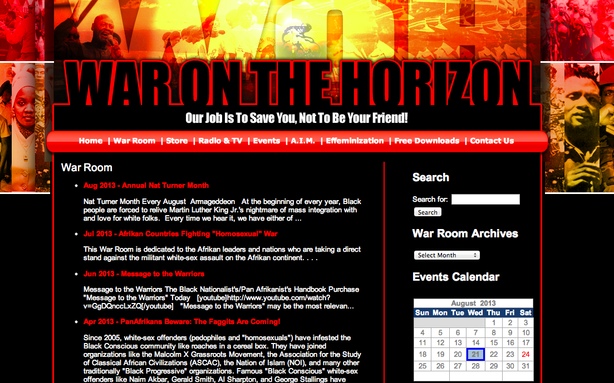 Hauled on the carpet, Kimathi, a.k.a. "The Irritated Genie", told his bosses the website is strictly entertainment and a vehicle for selling concert and lecture videos.

Kimathi's site is not in this vein of this imagined threat — on the contrary, War on the Horizon calls Obama a "a treasonous mulatto scum dweller," and lists him among the movement's enemies (also on the list? Oprah Winfrey, Whoopi Goldberg, and Condoleezza Rice, among others) Instead, the DHS employee advocates for:

In his first video, Gilbert launched into a blistering bout of vulgarity as he used municipal weapons and ammunition to pepper zombie targets that he named for a councillor he really doesn't like.  He followed that up with this apology.  Same warning.


Oh yeah.  "Chief" Kessler also sits on the county school board.
Posted by The Mound of Sound at 8:23 PM