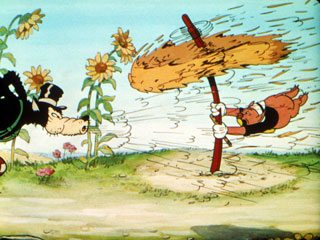 Little pig, little pig
Let me come in
Not by the hair on my chinny, chin, chin
Then I'll huff and I'll puff and I'll blow your house in.

Obama's Hurricane Sandy Rebuilding Task Force has released a report urging Americans to be like the little pig who built his house of bricks, not the unfortunate little pigs who built their houses of straw and sticks.  The warning is the Big, Bad Wolf isn't done yet, not yearly.   He's coming back.

The 200-page report contains 69-recommendations for action, on a regional scale, to prepare for future natural disasters of increasing frequency and severity.  It focuses on improving government responses both in nature and timing and on encouraging reconstruction standards to better meet what's likely coming.

Shaun Donovan, the secretary of Housing and Urban Development who led the taskforce, said the strategy would "protect families, small businesses and communities across the region and the taxpayers' investment in them, from the risks posed by sea level rise and more extreme weather events – risks that are made worse by the reality of a changing climate."

Donovan said the strategy would serve as a model for communities across the US facing such risks. The report calls for more streamlined assistance for such communities, and explores how to advance energy infrastructure, to ward off outages and fuel shortages and better telecommunications in areas likely to be crippled by power failures.

In the past year alone, there have been 11 separate weather- and climate-related disasters across the US, with estimated losses at $1bn each, Donovan said. Sandy was the second costliest hurricane in US history, after Katrina, which in 2005 caused $108bn in damage, or $128bn adjusted to 2012 dollars, according to the National Hurricane Center report earlier this year.

"We know that every dollar we spend today on hazard mitigation saves us at least $4 in avoided costs if a disaster strikes again" said Donovan. "By building more resilient regions, we can save billions in taxpayer dollars."
Posted by The Mound of Sound at 12:19 PM

So build houses which will be water and fire repellent. Water and fire will not come near them. That will take more than bricks - some magical material?

Maybe Dick Cheney will have such a material.

Besides, if you really wanted to pontificate on weather and government, this leaves you nude : http://www.uoguelph.ca/~rmckitri/research/globaltemp/GlobTemp.JNET.pdf

Opit, persist in your blind stupidity if you must but just do it elsewhere. When you can show me a single national academy of sciences from one OECD country backing your denialism we'll talk. But you can't because they don't. Which leaves you to scour the world of the wingnutosphere.

Even you are bright enough to realize that, if this denialism was true, even arguable, then every fossil fueler on the planet would be on the warpath to take down climate science. Instead we have you. Hmm, wonder what that means?

Mound, who is this Opit guy? He left a comment on my blog and links which gives the impression that he agrees and he is progressive.

Another on Global warming and again seems to agree.

He also reposts yours, mine and Dr.Dawg and other progressive bloggers posts.

Actually, LD, I think he's neither fish nor fowl. He seems to be a denialist on climate change but progressive on some other matters. I think he also has extremist tendencies in some areas. I have asked him not to comment on my blog as I really have no time for some of his views.

Sometimes MOS, you sound bull headed and unable to acsend to discourse.

I suspect that, at times and for particular reasons, that's quite true, Anon. Then again if you find it particularly offensive I can always refer you to a few thousand other blogs where you might be less disturbed.