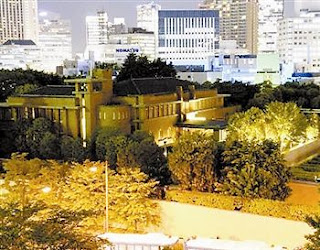 Japanese prime minister Shinzo Abe won't set foot in the place.  In 2007, during a previous term in office, Abe left the prime minister's mansion and, despite being re-elected seven months ago, he shows no signs of wanting to go back.

Rather than move into the presidential home, Abe has preferred to make the 15-minute commute from his family's house to the office and has shown no indication that he is preparing to move into the art deco mansion in the heart of Nagatacho, the capital's political district, where he lived during his previous stint as prime minister in 2006-07.

While officials deny Abe has a fear of the supernatural – and there was no discussion of the matter in 2007 when he resigned from office due to ill health – rumours abound that the official residence is haunted by figures from Japan's bloody prewar history.

In 1932, a group of naval officers assassinated the then prime minister, Tsuyoshi Inukai, at the residence during a failed coup. Four years later, it was the scene of another attempted coup by a radical faction of the imperial Japanese army.

Bullet holes and traces of fire damage near the entrance to the mansion property have left physical reminders of the coup attempts. But there have also been frequent reported sightings of men in military uniform in a nearby garden. Several former first ladies have refused to move into the building over fears it was haunted.

Japan was a pretty gory place to be a politician in the runup to WWII.   Many of the homicidal young officers, who liked to use their katana or samurai swords on their political masters, got off with a slap on the wrist because they were deemed to be acting misguidedly but with patriotic fervor.
Posted by The Mound of Sound at 8:56 AM