Chris Hedges on "Murdering the Wretched of the Earth" 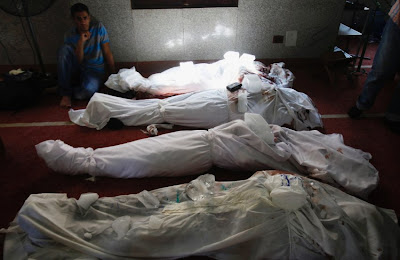 There's a reason the Muslim poor flock to radical Islam, several reasons in fact.  They've been discussed at length before but Chris Hedges, in light of the massacres ongoing in Egypt, recaps:

Radical Islam is the last refuge of the Muslim poor. The mandated five prayers a day give the only real structure to the lives of impoverished believers. The careful rituals of washing before prayers in the mosque, the strict moral code that prohibits alcohol, along with the understanding that life has an ultimate purpose and meaning, keep hundreds of millions of destitute Muslims from despair. The fundamentalist ideology that rises from oppression is rigid and unforgiving. It radically splits the world into black and white, good and evil, apostates and believers. It is bigoted and cruel to women, Jews, Christians and secularists, along with gays and lesbians. But at the same time it offers to those on the very bottom of society a final refuge and hope. The massacres of hundreds of believers in the streets of Cairo signal not only an assault against a religious ideology, not only a return to the brutal police state of Hosni Mubarak, but the start of a holy war that will turn Egypt and other poor regions of the globe into a caldron of blood and suffering.

The only way to break the hold of radical Islam is to give followers of the movement a stake in the wider economy, the possibility of a life where the future is not dominated by grinding poverty, repression and hopelessness. If you live in the sprawling slums of Cairo or the refugee camps in Gaza or the concrete hovels in New Delhi, every avenue of escape is closed. You cannot get an education. You cannot get a job. You do not have the resources to marry. You cannot challenge the domination of the economy by the oligarchs and the generals. The only way left for you to affirm yourself is to become a martyr, or shahid. Then you will get what you cannot get in life—a brief moment of fame and glory. And while what will take place in Egypt will be defined as a religious war, and the acts of violence by the insurgents who will rise from the bloodied squares of Cairo will be defined as terrorism, the engine for this chaos is not religion but the collapsing global economy, a world where the wretched of the earth are to be subjugated and starved or shot. The lines of battle are being drawn in Egypt and across the globe. Adli Mansour, the titular president appointed by the military dictator of Egypt, Gen. Abdul-Fattah el-Sisi, has imposed a military-led government, a curfew and a state of emergency. It will not be lifted soon.

He's right.   We support those who created the conditions of despair for the masses, who drive them into the arms of radical extremists, and then we dehumanize them, the better to prepare for their slaughter.  As Hedges points out, again correctly, this is only just getting started.

What is happening in Egypt is a precursor to a wider global war between the world’s elites and the world’s poor, a war caused by diminishing resources, chronic unemployment and underemployment, declining crop yields caused by climate change, overpopulation and rising food prices.

The belief systems the oppressed embrace can be intolerant, but these belief systems are a response to the injustice, state violence and cruelty inflicted on them by the global elites. Our enemy is not radical Islam. It is global capitalism. It is a world where the wretched of the earth are forced to bow before the dictates of the marketplace, where children go hungry as global corporate elites siphon away the world’s wealth and natural resources and where our troops and U.S.-backed militaries carry out massacres on city streets. Egypt offers a window into the coming dystopia. The wars of survival will mark the final stage of human habitation of the planet. And if you want to know what they will look like, visit any city morgue in Cairo.
Posted by The Mound of Sound at 11:44 AM

Morsi would have been successful if he would have concentrated on improving economy. Instead he wanted to impose Sharia Law.

Now it is poverty and unemployment which is perpetuating the turmoil. Military is interested in control and not in economy or democracy and that is another motivation for current turmoil. I believe religion is very little to do with it. As a matter fact religion is used to control the public. Iran is a good example.

I'm not sure you're right on that Sharia law business, LD. There are Egyptian journos who claim that it didn't make any difference who was in power, the country's food security crisis was bound to trigger ongoing upheaval.

The Egyptian military is very much interested in the economy as it has a huge direct interest in it. It's much like Pakistan in that regard.

About the only thing properly funded in Egypt any more is the military. Oh well, let the civil war begin. Somalia on the Nile anyone?

I agree with Hedges. I would even say that the western world seems quite content to see all these countries that have a substantive Muslim population, whether fundamentalist or not, in constant turmoil with tons of bloodshed. These global capitalists have completely destabilized relatively prosperous countries like Iraq, Libya and Syria (albeit under despotic rule), turned the clock back on the fragile stability of Somalia and Afghanistan (albeit ruled by Islamic fundamentalists) and are now quietly cheer-leading further unrest in Egypt, Turkey and Iran (where they don't like the election results).

One thing that rarely gets mentioned is that the global capitalist goals of unfettered foreign investment, wholesale privatization and IMF financing/banking control have rarely been embraced wholeheartedly by many of these countries. The Arab world in particular has its own equivalent on the World Bank to finance infrastructure development and their own strict rules regarding debt and interest.

Heavy western investment can only occur with pliant governments such as was the case with Mubarak. I heard horror stories from an Egyptian friend who said that they were prohibited from growing indigenous wheat and were forced to raise crops mandated by foreign financiers like the World Bank and rely on imported wheat.

Only recently I read that Egypt was one of the world's biggest wheat importers and I couldn't grasp why. Your information certainly fills the gaps.

Have we so manipulated Egypt's agriculture that the country will remain in the throes of destabilizing food shortages? If so have we created Somalia on the Nile?

When countries such as Egypt erupt in civil war, such as Syria has done, the west and the 1%ers have only themselves to blame. The elite in Egypt want to continue their life styles. The right in other Arab countries want to keep it all and make even more. At some point people realize they will die of their poverty. In some countries they will say no, if we are going to die, at least let my death mean something.

If there is money for a large military there ought to be money for schools, housing, food, water, and health care. If there isn't then the government just doesn't care.

I believe Beijing York summed it quite well.

I will not be surprised that CIA and Mossad is involved to stir up the trouble. Israel stands to gain the most. When all its neighbours are in turmoil then Israel can do whatever it wants. It is extensively expanding its settlements into Palestinian territory and there is hardly a word about it in the main media.

Morsi did screw up. When he was elected, Egyptians were generally content. On the urging of Hillary Clinton, Morsi successfully negotiated some dispute between Israel and Turkey. Both Obama and Hillary Clinton praised him. His international debut got to his head and he proposed a major constitutional change to include Sharia law and wanted to enforce it without the approval of Egyptian parliament. When Egyptians showed anger over it he ran it by the parliament and made it into the law of the land.

That got women (who feared return of hijab) and others who did not like Sharia law got very angry and the big demonstrations began. Military saw an opportunity, they supported demonstrators and went for a coup. That is when Muslim Brotherhood was mobilized and they started demonstrations which turned deadly.

However, Beijing York is right that it suits the western interests and makes Israel happy.

"I would even say that the western world seems quite content to see all these countries that have a substantive Muslim population, whether fundamentalist or not, in constant turmoil with tons of bloodshed." What is the answer? I too have a friend working in the Middle East. Some of her stories are mind boggling.