Here, Mo, You Can Have Hosni's Cell 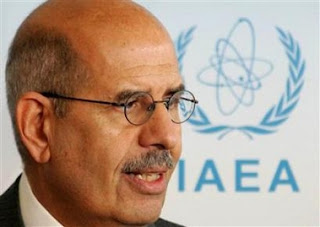 Any remaining shred of doubt that the Egyptian military is playing  major league hardball on this coup d'etat is gone.  It's not just the killings of Egyptian Islamists.  It's not the release of their own capo, Hosni Mubarak.   Now they're after Mohamed ElBaradei, the liberal who served for exactly one month as vice-president briefly after the ouster of Morsi's Muslim Brotherhood.

ElBaradei, long-serving former Director General of the International Atomic Energy Agency, lawyer and diplomat, winner of the 2005 Nobel Peace Prize, is being accused by the Egyptian military of a variety of misdeeds arising out of his four-week tenure as Veep.

ElBaradei, who quit following last week's mass killing of protesters, "stands accused of failing to present any alternatives to dispersing two mass sit-ins in Cairo, as well as disregarding "terrorist crimes" committed by the Muslim Brotherhood there.

ElBaradei was a member of the National Salvation Front, part of the opposition to Mohamed Morsi, who was deposed by the army last month. He has been vilified in the Egyptian media since quitting. He has been called a "traitor" and caricatured stabbing Egypt in the back. The case is being brought by a professor of law, Sayeed Ateeq. ElBaradei is now in Austria with his family.

Ah, Austria, what a lovely place at this time of year.  I'm just guessing but Mo and family might be staying there for a while.
Posted by The Mound of Sound at 10:56 AM

Good lord. I guess they've decided they're tough enough they don't have to play the factions game any more, they'll take the whole ball of wax and to Hell with anyone who has a problem.
I think this is probably unwise of them.

Do you see an end to this coming soon? Holy Shiq....what a mess. It is difficult to see how democracy can be established if it ever was.

It looks as though they figure they have the civilian side sufficiently divided and the secular part adequately cowed that they can storm right back to the Mubarak days. ElBaradei plainly saw the writing on the wall when, on resigning, he promptly got himself and his family to safety in Austria.

Anyong, no one can tell how this plays out. It depends, in part, on just how brutal the regime will be without triggering some sort of foreign intervention. The Yanks have armed the generals to the teeth with more than a billion dollars a year worth of reasonably high-tech hardware and ordinance. I'd be surprised if Washington didn't sit this one out with, perhaps, token sanctions.

The question on everybody's mind, Israel included, has to be what a successful counter-revolution would look like? Round 1 brought the Muslim Brotherhood to the fore. They weren't able to hold the country. The secularists thought they could count on the generals to support them. Big mistake and that will probably cost them in the long run.

A key reason that al Qaeda got so heavily involved in Libya is because it missed its chance in the first Egyptian revolt. Hard to imagine them blowing this second chance. This chaos is tailor-made for them.

Let's see how well the Generals deal with the apolitical Egyptians, the big segment of the population that just wants food. As we witnessed in the Arab Spring, their group was instrumental in the uprisings. I expect the youth contingent will be divided between the Islamists and secularists as they have been in Syria.

The move against ElBaradei does seem to signal that the Generals aren't interested in democracy right now.

Yeah. I agree that in the end, it's going to come down to the general mass of Egyptians who mainly want food.

One problem for the generals is that actually giving it to them would be one of the few actions that might actually push the US to intervene. Massacres and martial law are one thing, but feeding the poor smacks of socialism.

If taming the masses with manna is what it takes to quell the unrest - and if that pleases the Israelis - I doubt the Americans would do anything but very quietly applaud.